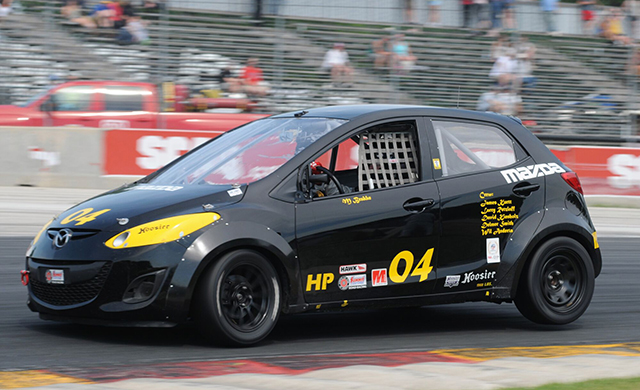 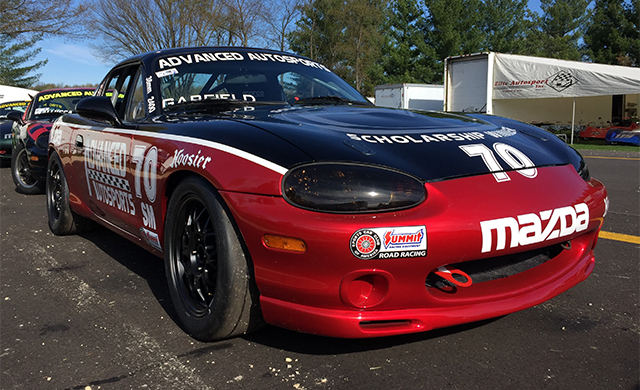 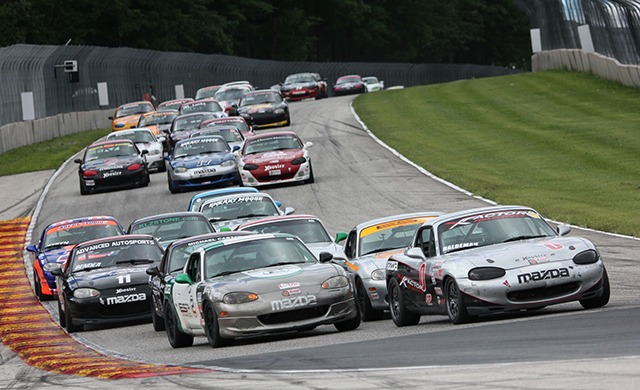 Penultimate round of Hoosier Super Tour at Road America also features first-time winners at the iconic event Despite being in its 62nd year, the WeatherTech Chicago Region June Sprints, the penultimate stop of the 11-round Hoosier Racing Tire SCCA Super Tour series, saw a few firsts at Road America in Elkhart Lake, Wisconsin. Formula Enterprises END_OF_DOCUMENT_TOKEN_TO_BE_REPLACED 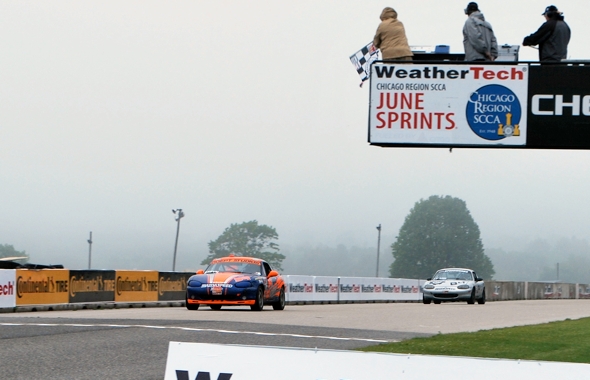 SCCA’s largest Club Racing event outside the National Championship Runoffs, the Chicago Region WeatherTech June Sprints, went off under mostly sunny skies at Road America this past weekend. For the first time, the event was a doubleheader as are all the SCCA Majors events. The June Sprints was Rounds 5 and 6 of the Northern Conference Majors Tour.

Saturday’s races were 10 laps, as opposed to the usual timed races, and Sunday’s were scheduled for 13 laps of the 14-turn, 4.0-mile circuit.
Danny Steyn was just one leader among eight drivers in contention for Spec Miata early, but the race came down to three top drivers sorting out the final laps alone. With the laps winding down, Todd Lamb was sandwiched between teammates Jim Drago and Craig Berry, left with the nearly impossible decision of going for the lead and falling to third, or staying in second to the checkered flag. Practically attached at the bumper for the final two laps, Drago was watching his mirrors while Berry looked for any opening to move around Lamb. None of the three drivers made a dramatic move, and crossed the finish line with Berry’s No. 2 East Street Racing Miata at the front followed by Lamb and Berry.

The Formula Mazda field was small at the June Sprints, but that didn’t lessen the excitement in the battle for the lead. Dale VandenBush led the opening lap, sneaking around teammate and polesitter Jason Vinkemulder. Vinkemulder found his way back around on lap two, with VandenBush leading laps three and four. Vinkemulder was back in front on lap five in his No. 10 Lake Effect Motorsports Formula Mazda, and edged just in front of his teammate. With clean air, Vinkemulder held the lead for the last half of the race and took the checkered flag.

Jim Drago, fresh off the Spec Miata win, couldn’t get his No. 2 East Street Racing Mazda Miata to fire on the grid. As the field rolled past him, his Super Touring Lite machine roared to life, and he caught the end of the field just before turn 12 on the pace lap. Drago worked through the field, and moved around then-leader Breton Williams’ No. 00 First Wealth Financial Group Mazda RX-7 on lap five to move into the lead and get clear, taking the checkered flag and sending his crew off to replace the battery in the Mazda.

Daniel Bender held off Jim Ebben for the Touring 4 win in the tightest race of the run group. Bender’s No. 10 Bravo Trailers/Autobarn Mazda Mazda MX-5 set the pace and kept in front of Ebben’s RX-8, eventually creating a gap by the checkered flag.

The racing saying “cautions breed cautions” was fresh in Lamb’s mind during a lap 10 restart of Sunday’s Spec Miata race, and knowing that helped him to a win.

With nine cars in the lead pack early in the race, a two-car incident near Turn 7 dislodged the tire barrier and brought out a full course caution. Steyn lost the lead immediately in the first race when his restart speed allowed the cars behind him to get a head of steam and draft by him going into Turn 1. When he brought the field single-file to the restart on lap 10, Steyn used a slower approach up the hill to try to hold the lead.

Unfortunately, rather than following the field to the green flag, drivers in the middle of the pack tried to anticipate the restart going through Turn 13. Eight cars were collected in the carnage and scattered throughout the Kettle Moraine countryside, all before the green flag came out. Unaware at the time of the extent of the damage, Steyn took the lead through Turns 1, 2 and 3, with Lamb’s No. 80 Cahall/Driving Coach/Hawk Performance Miata drafting down the hill toward Turn 5. Steyn left the door open to the inside, and Lamb went past. Lamb completed the move just before the full course caution flags came back out, freezing the field and bringing out the checkered flag early to complete clean-up. Lamb took home the winner’s trophy, with Steyn second and Eric Stearns third.

Some drivers seemed to exorcise some recent demons this weekend with sweeps in the Production classes. Jim Daniels had been bitten by enough little mechanical issues at Road America, both at the June Sprints and previous SCCA National Championship Runoffs, but recovered this weekend with a pair of victories. Daniels’ No. 176 WebLaps.com Mazda MX-5 pressed the pace from start to finish, running early with Joe Moser in a battle for the lead. Moser pulled off course early, with Daniels well ahead of Jon Brakke’s Miata, and Daniels pushed to the finish.

Ken Kannard swept F Production at his home course in the No. 51 Northwest Cable Construction/Hoosier Mazda Miata. The wins will help make up for five years of Road America Runoffs disappointment for Kannard, who had a series of issues that kept him from his true potential at the event.

All of the front running machines in the big formula group went out on rain tires, as the race began wet after a brief 15-minute shower. However, the strategy all changed late in the race when the sun came out and the track started to dry. Fabio Castellani led the opening 11 laps in the wet, and continued to get quicker as the race went on. His problem, though, was that by lap 10, when a clear, dry line began to appear, Sedat Yelkin’s No. 75 Everclear/K-Hill Swift 016/Mazda was going even faster. Yelkin moved around Castellani on lap 12 and looked clear, until he realized that Conner Kearby’s No. 56 GK Motorsports Swift 016/Mazda was even quicker by that point. Kearby closed a second-and-a-half on the final lap, getting to the gearbox of Yelkin at the checkered flag, but probably falling one lap short of challenging for the lead.