Nearly every rotor-head has thought about it: What happens if you put a 13B into a Miata? Of course, it’s been done; but there aren’t many examples in racing applications. That’s a bit surprising, since the SCCA Super Touring rules allow for engine swaps within the manufacturer family. But here’s one example.

Built by Flatout Motorsports, the car is owned by Jon Farbman (and it’s currently for sale) and Amy Mills raced it at the 2017 Runoffs to a 21st-place finish. It’s very similar to the piston-powered Miata Leverone raced at Indy, with the exception of the rotary.

“That car is just as fast as my car,” says Leverone. “It’s got the same horsepower, same weight, same everything now. We developed all the shock stuff and the aero on that car and we kind of transferred it over to the piston car.”

Flatout had a lot of experience with rotaries, so it made sense. The rotary, Leverone says, is a bit more bulletproof when it comes to over-revving. “When you start increasing the RPM limits of [the piston] motors, you run the risk of sending rods out the side. The rotary doesn’t care about that stuff. At the time we developed it, it looked like it might be the more powerful motor; as it turned out, after we developed the piston motor, we found out they were about equal.” 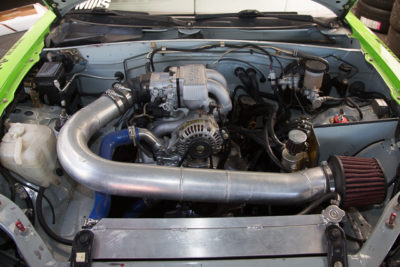 The oil pan proved to be one of the bigger problems with fitting the rotary, which is seated far back and low, almost into the transmission tunnel. “We basically just mounted it to the existing Miata transmission and mated it up with just a bell housing change on the front. We had to build a skid plate for [the oil pan] to keep it from getting hit – it’s the lowest thing, well below the subframe,” Leverone explains.

For Mills, who is still getting used to STL and has driven Leverone’s stock-engined car as well, the car handles a lot like her Spec Miata, but with more power.

‘I’m learning a different way of driving,” Mills explained at the Runoffs. “In the [Spec] Miata you can kind of floor it and nothing too drastic really happens. This has way more power and a rotary engine. I’m having a bit of a difficult time adapting to the car, because I’m learning the track and the car at the same time. But I would say it’s terrific fun. You go a lot faster than the Spec Miata.”

That’s three different approaches to building a fast STL MX-5 – a stock-engined NB, an NC and a rotary-powered NB. That’s one of the cool things about the Super Touring classes: there are many routes to arrive at the same destination allowing for a variety of ways to feed the speed craving.