When Amy Mills met her husband, Whitfield Gregg, she knew nothing about racing. But an interest that began with watching Formula 1 together eventually blossomed into an on-track educational outing, something she liked much more than she thought she would. Racing was the next logical step.

“It’s a really fun thing to do as a couple,” says Mills, who races in Spec Miata and has also expanded into Super Touring Lite. “We’ve always gotten along great and had a great marriage. But I think it’s been really fun for our marriage to do this thing together. Most of the people we know don’t do things like that together. We’ve traveled all over the place – we’ve gone ice driving in Sweden; we did a race at Zandvoort near Amsterdam; we got our licenses at Skip Barber at [Mazda Raceway] Laguna Seca. We’ve been to a lot of cool tracks around the states.”

Fun is part of it, but the two also possess a thirst for competition. “I’m kind of a competitive person,” she admits. “Whit and I used to run marathons before I started racing.”

Mills and Gregg race with Nick Leverone’s Flatout Motorsports. Although they now live in the Northwest, they used to live in New York and did their racing on the East Coast, so they continue to travel to race with the team, partly because there is more competition in Spec Miata in the East than the Northwest. The same is true in STL, a class she expanded into, although she says she still prefers Spec Miata. 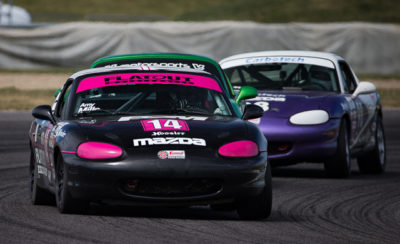 If you’ve seen Mills’ Spec Miata, you might have noticed the zebra-striped roof, or perhaps an inflatable zebra in the paddock. It all began as kind of a joke that developed into a theme.

“It’s probably not as funny as people think,” she explains. “The whole zebra thing started with my mother. She was in a fashion show for seniors and wore a zebra dress. Then we were in Las Vegas for my niece’s 21st birthday, and we all went shopping and we all came back with zebra clothes – none of us planned it. So we were walking around Vegas all wearing zebra attire. It just kind of became a thing in my family. It does look cool on the car.”