17 drivers gathered at the Circuit of The Americas for the 2020 Spec MX-5 Challenge Championship November 5-8 vying for laurels and over $70,000 in prizes. Tyler Quance, Wes Mollno and Tom Martin III came into the weekend with the maximum of 60 carryover points, followed by Aaron Jeansonne, Justin Piscitell and Matt Fassnacht with 59. A further 60 points were up for grabs at CoTA.

After two days of practice to learn the challenging 20-turn F1 circuit, drivers proceeded to qualifying. Justin Piscitell (DAMG Racing) took pole, with a time of 2:34.470. Aaron Jeansonne (Winding Road Racing/Mazda) was close behind at 2:34.624. The front row was followed by three other drivers in the 2:34s: Joey Atanasio (Dentmax Racing) at 2:34.764, Tyler Quance (Drake Motorsports Development) at 2:34.774 and Tom Martin III (Winding Road Racing) at 2:34.858.

Race 1 was delayed and shortened by a mile-long oil drop in the previous race, setting up a mad dash for the 30 championship points on offer. Piscitell got an excellent start, as did Quance; after T1, these two were in the lead followed by Jeansonne. Unfortunately, a lap later, Quance spun on the oil dry in T12, which forced Piscitell and Jeansonne to take evasive action. The cars came together, but continued after being passed by Martin, Drake Kemper and Atanasio. Martin held the lead, but Kemper made a slick move in T10, setting up a pass into T11. This put Kemper in the lead, followed by Martin and Atanasio. On the final lap, Atanasio went inside Martin at T15, but Martin used his practiced over/under to roll speed more into the carousel creating a difficult exit for Atanasio from T19. Atanasio defending T20 on the inside, but Martin won the drag race to the checkered flag. Kemper finished with a winning margin of 0.744 sec., while Martin’s margin over Atanasio was a sub-atomic 0.001 sec.

Race 2 got off to a more orderly start with Piscitell in the lead, but Quance again showed his CoTA experience by jumping from the outside of row 2 into the second position early in lap 1. These two were not really challenged for the rest of the race, as Jeansonne, Martin and Kemper ran inches apart and swapped positions. Martin then had a mechanical issue that slowed his pace and Kemper got around Jeansonne. Aidan Fassnacht moved into fifth and held it, followed by the ailing Martin. The final order of was Piscitell, Quance, Kemper, Jeansonne, Fassnacht and Martin.

This result shook up the season points substantially:

Parity and driver development are at the heart of the Spec MX-5 Challenge Series. Ensuring tech compliance, data were collected after multiple sessions to help flag areas to check, and a thorough list of parts were also scheduled to be checked. Across qualifying and both races, the following items were checked by tech.

Each car, for each session, was found compliant – a testament to X-Factor Racing, Winding Road Racing, Dentmax Racing, and all the teams of the series.

To better showcase the parity of close competition across the eight championship events, we highlight eight close podium finishes: 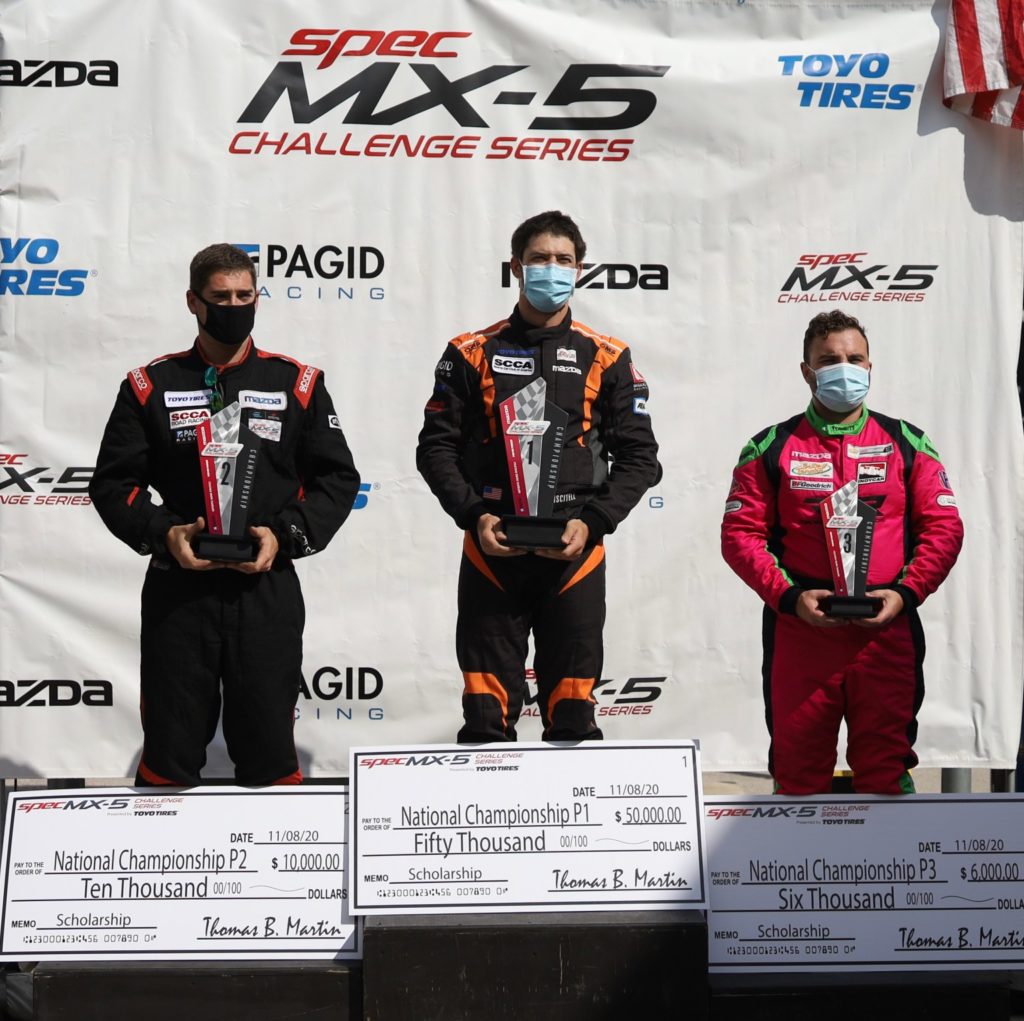