Part 1: The reasons for hiring a driving coach are more than one might think, and so are the things they can do.

It’s very possible, even for very competitive racers, to get complacent with driving. But there are always new challenges – new cars, new tracks, new competition – so there may be times when one has to work at it. Many of those changing conditions can be overcome with a driving coach.

“Many racers hit a plateau. They’ve been driving a while and you just feel like they’re getting better,” says Tom Long, a pro driver and a driving coach. “Or it could be that one has a new car and does not want to make a mistake with it, so he or she hires a coach that has some experience in those types of cars. A coach can bring a driver up to speed at a quicker rate. Another reason is local knowledge. For example, the Runoffs at Road America this year…if you have not been around the four-mile course, and laps are limited, reaching out to a driving coach that has experience at that circuit could be a huge value in your learning curve.”

Once you’ve decided to hire a coach, there are certain things to look for in one. There are a lot of fast drivers, but that doesn’t necessarily translate into being a good coach. It’s one thing to say what your braking points and entry speed into a corner need to be; it’s another to be able to explain why and how. 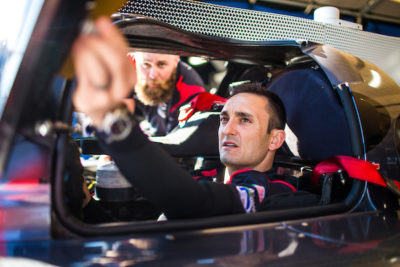 “Therein lies the success: How well does the coach communicate the information so that the driver is able to utilize it and capitalize on it? The coach needs to do a good job of explaining the information in a very easy-to-understand format,” says Long. “It can’t be overly detailed, and it has to be something simple to remember or to work on. It can’t be five things to work on; it needs to be one [or] two things that can be focused on.”

Andrew Carbonell, another pro driver and go-to coach for Mazda Motorsports, echoes Long’s sentiment about the importance of explaining what’s going on.

Carbonell even goes so far as to say that just telling someone the marks they should be hitting is a little degrading and somewhat discouraging. “It’s discouraging for someone who thinks they’re at their limit,” he says. “They are driving at their limit. You have to make them comfortable. I tell my guys that it’s not about getting faster, it’s about getting comfortable at that speed; because the more comfortable you are, the slower it will feel, and the faster you will go. If you’re not comfortable, everything feels like it’s happening 10 times faster than it is, and you’re not ahead of the car.”

Now that some reasons for having a coach, and what qualities to seek in one, have been explored, in a future installment we’ll discuss how, when and where to get coached.

Below are a few coaches to consider:

Andrew Carbonell, based in Miami, FL
Made a career as one of the top Mazda MX-5 racers in the world. Carbonell helped develop the MX-5 Cup car, and been a championship contender in the IMSA Continental Tires SportsCar Challenge.

Tom Long, based near Charlotte, North Carolina
www.tomlongracing.com
Helped develop the Mazda MX-5 Cup car, and is very active as a driver coach. A former MX-5 Cup champion, Long moved through the Mazda grassroots sports car program to reach the Prototype team in 2014.

Joel Miller, based in San Diego, CA
joel-miller.squarespace.com
Has a degree in mechanical engineering, was the featured presenter in the national-touring Mazda STEM (Science, Technology, Engineering, Math) education program R.A.C.E. (Racing Accelerates Creative Education), was the official driver coach and mentor for the Mazda Road to Indy program, and raced the No. 70 Mazda RT24-P Mazda Prototype.