At the end of the 45-minute race, Mazda Road to 24 Scholarship driver Robby Foley came out victorious, after making an early pop for the lead overtaking Nathanial “Sparky” Sparks at the start. The move allowed him to control the pace for the rest of the race. The battle for the remainder of the podium positions was heated as Sparky saw pressure from Mark Drennan. As the race wound to a close, Drennan would spin in turn 4 which would take him out of the battle.  John Dean II had a slow start, but made a comeback after Drennan’s incident and finished the race in third.

“It’s a huge honor to even be a part of this event, let alone win it,” said Robby Foley.   “With the inclusion of all these international drivers from different countries, it’s really an honor to mix it up with racers from around the world. But the race overall went to plan. I was able to get by Sparky at the start, and control the race from there. I was just trying to be consistent and my lap times were almost identical. I want to thank everyone that has brought me here, including Mazda Motorsports and Atlanta Motorsports Group.”

German driver Moritz Kranz, one of the more experienced of the international racers, finished a very strong sixth, and recorded the second-fastest race lap.  Kranz has raced throughout Europe, but this was his first race in the U.S, and his first race in a Mazda MX-5.  When asked about his first American race, Kranz noted, “It was just an awesome feeling.  Twenty years ago I was watching CART on TV as a fan and saw the famous Zanardi pass, and now I am racing here.  This is certainly a bucket-list track for a racer.  Tomorrow, I hope to get a better start and challenge for the podium.”

John Doonan, director of motorsports, Mazda North American Operations, summed up the Mazda perspective, noting, “The first half of the double-header exceeded our expectations.  We had close action, and thanks to the live-feed at www.MazdaLIVE.com, were able to showcase our race in front of a global audience.  I can’t say enough great things about our international guests.  They not only had to learn the track, they had minimal seat time compared to our U.S. racers who have been racing with us all year long.  I think the Sunday race will be even better.”

The drivers will complete the weekend with a second 45-minute race on Sunday morning. The racer scoring the most points between the two races will be crowned the Global Invitational champion. The race will be lived streamed on www.MazdaLIVE.com starting at 10:00 a.m. (Pacific) Sunday, September 11, 2016. 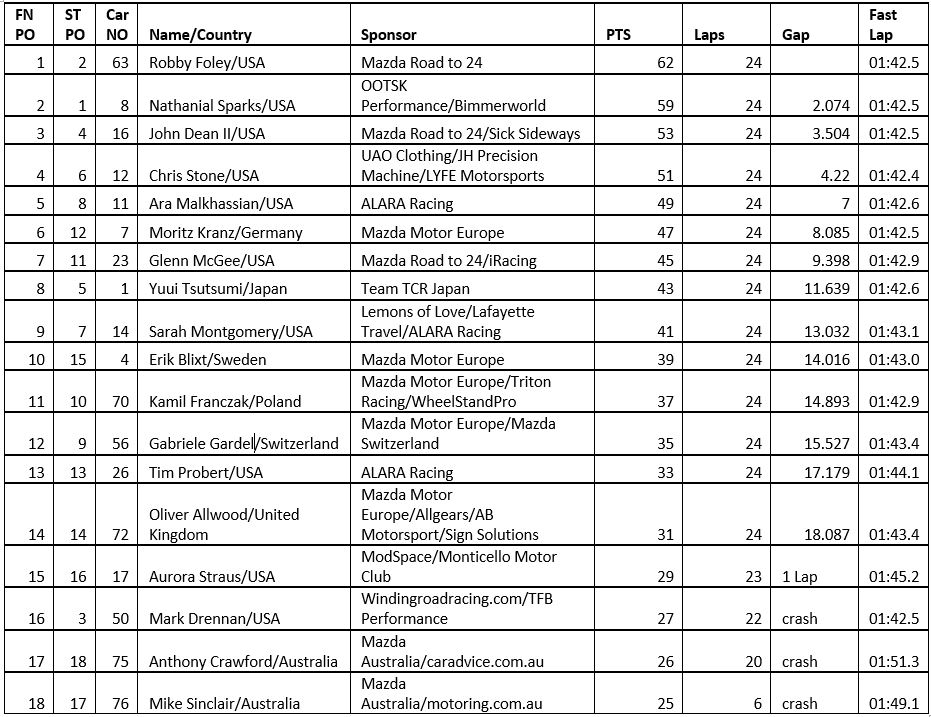 The Idemitsu Mazda MX-5 Cup presented by BFGoodrich® Tires is the signature spec series for the Mazda Road to 24 (#MRT24), the sports car counterpart to the Mazda Road to Indy (#MRTI). On both paths, Mazda-powered champions earn a Mazda scholarship to advance their career. The MX-5 Cup champion earns a $200,000 scholarship.

Information on the car is online at www.mazdamotorsports.com.