The results are here.

(Ron Bauer, pictured above.)
To begin, let’s flash back to the 2015 SCCA Solo Nationals last summer in Lincoln, NE.  Mazda Motorsports (with its partner Long Road Racing) brought a pair of new 2016 Mazda MX-5 Miatas to this massive event.  The goal was to start development of not only parts for the car, but the car itself for Solo competition.  With the help of Ron Bauer, Eric Strelnieks, Tara Johns, Rachel Kerswill, and other top-tier drivers, the STR car was fine-tuned with the available parts at that time.  While Bauer and Strelnieks both ran times that would have been in the middle of the trophies, everyone agreed that more development would be needed to make the car competitive at the top of the STR class. 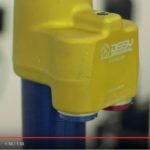 One of the items on that STR car was discussed at Mazda Motorsports’ dinner during Nationals week; that item was the shocks.  The car was running on some prototype dampers from Multimatic. (See the video about the Dynamic Dampers by clicking the picture to the left.)  The dampers were Dynamic Suspensions Spool Valve (DSSV).  While this brand does not carry the same recognition in the Solo community as AST, Moton, MCS, Ohlin, Penske, or JRZ, to name a few, that doesn’t mean that they are inferior to these other high-end shocks.  In fact, Multimatic provided the dampers that were on the four-time F1 champion Red Bull car.  They’ve also been used in Champ Car, DTM, Indy Lights, and a number of other high-end series.  These dampers use spool valves to more finely control the fluid movements and are much less sensitive to heat than standard shim style dampers.  Ultimately, these same dampers are now the spec shock for the MX-5 Cup cars.

Jumping forward a bit, when Bauer started further developing his personal MX-5 for STR, the Dynamic dampers were not yet available due to the full stock of them being used to build the MX-5 Cup cars.  Therefore, as a stop gap, other shocks were used.  Recently, Bauer received a set of the Dynamics and has begun testing with them.  In addition to using this high-end shock, it was taken a step further, and the shocks are being used inverted.  (In the easiest sense, inverted means that the shocks are upside down.)  A couple of the benefits of this are less unsprung weight and stiffer setup.

What does all of this mean?  According to Bauer, these new double adjustable shocks not only ride better for daily driving, but control the bump and rebound much better than the previous shocks.  “When I first put these new shocks on, I contacted the good folks at Long Road Racing to get a suggestion on a starting point for settings on the Dynamic shocks.  With their input, I set the shocks and brought the car to a local test-and-tune event two weeks prior to the Packwood Championship Tour. The first few runs showed that the car was much more compliant with the bumps on the Packwood site, but the car exhibited a bit too much oversteer.  The oversteer was mostly on acceleration through and out of turns.  A couple of changes were made to the shock settings, and suddenly the car was able to put down power better than it ever had,” said Bauer.  “I’ll be honest, putting these on two weeks before a big National level event was risky, and I was concerned that I wouldn’t have enough time to dial them in.  That concern turned out to be unfounded.  It’s not that the other shocks were bad; in fact they worked very well; these Dynamic shocks make the car much more trustworthy.”

What kind of improvements in time does this translate to?  Bauer thinks that it should easily be worth between a quarter and half of a second for a top-end driver and likely more for most others.

So, beyond the shocks, what other items has Mazda Motorsports been developing?  I’m glad you asked!  Below are the other parts Bauer has been testing along with whether the parts are available.
–    Speedway style front swaybar with aluminum arms and adjustable endlinks (available now)
–    Adjustable rear sway bar (coming soon)
–    Cusco LSD (available now)
–    Winmax brake pads (available now)

More in-depth information will be forthcoming on the above parts, including part numbers.  Suffice it to say that these parts used in unison are creating a highly competitive car in STR trim.

Speaking of highly competitive, Bauer just won the Packwood Championship Tour this past weekend!
Packwood, Washington is a small town nestled in between Mt. Rainer and Mt. St. Helens.  It’s about two hours southeast of Seattle and about the same amount of time northeast from Portland, OR.

While this is one of the “local” sites that Bauer runs, Championship Tours always mean more competition.  This past weekend saw 19 competitors vying for 7 trophy spots.  In addition to Bauer’s 2016 Miata, other cars represented included the Honda S2000, Toyota MR-S (MR2 Spyder,) and earlier Miatas.
During the Friday practice, Bauer’s co-driver Charly Spyksma took a couple of runs on the team’s brand new BFG Rival S tires to scrub them in.  He proclaimed the car to be handling well on the new tires.  Sometimes testing can turn out to be wasted if the tires are not optimal, so it was good to reinforce that the previous shock changes were still working well with new tires.

Rain overnight on Friday left the course damp for the first run group, but STR was scheduled to run fourth.  Bauer took a course walk during the break between the second and third groups and noted that the course was mostly dry.  By the time the team took to the course, the moist areas were deemed to be insignificant.

Bauer started out with a 52.9 on his first run, which was the fastest raw time in class by about 4/10ths of a second, but it had a cone.  Second runs saw most drivers improve, including Bauer, who put down a 52.6.  It turned out this run left him in second by 0.100 as Kevin Dietz, who finished second at Nationals last year, had taken off about 8/10ths of a second.  Dietz was unable to improve on his third run, while Bauer shaved off enough to take the Saturday lead by 0.040.

Sunday’s course looked a bit faster than Saturday’s.  While speeds were a little higher, the times were about a second slower.  Of note, the start included a four-cone slalom that could be taken flat if done correctly, and the finish necessitated a shift to third.  “I had the car re-tuned a few months ago and had the rev limiter bumped up to 7200, which allows the car to go right around 60 in second gear now,” says Bauer.

Bauer started with the fastest run in class on his first run and then took a second off on his second run.  It turned out that this run would be more than enough to take home the first place trophy, but he then went out and took off another tenth on his final run.  Dietz would fall to third in his S2000 as his co-driver put down the second fastest time in class on Sunday.

According to Bauer, “I was really happy to have had the time to dial in the Dynamic shocks prior to the Tour.  The course design was excellent for both days, although it did unfortunately run over a few of the major bumpy areas.  The shocks handled these bumps without allowing the car to get out of shape.  That combined with the Mazda Motorsports front swaybar really made the car handle incredibly well.  I can’t believe how far we’ve come.  I’m looking forward to the Pro Solo this coming weekend, and hope to repeat my win.”
Stay tuned for a recap of the Packwood Pro Solo.