Pro Mazda Championship racer Jose Gutierrez has loved racing ever since watching his uncle and grandfather participate in motorsports.

Jose Gutierrez grew up in Monterrey, Mexico, watching his uncles and grandfather race, so the interest in motorsports was ingrained from the start. It was practically inevitable that when the time came, he would step into a kart. He did so at age 5, and hasn’t looked back since.

Now in his second full year of Pro Mazda Championship Presented by Cooper Tires competition, Gutierrez is pursuing a career in the TUDOR United SportsCar Championship. As he hones his racecraft, he’s also honing his marketing and social media skills, and is the latest winner in Mazda and Cooper Tire’s social media contest.

The Mazda Road to Indy ladder might seem an odd path for someone looking for a career in sports cars, but it’s one many drivers have traveled. It’s especially hard to ignore the Mazda scholarship money offered at each step along the way to the champions.

“The Mazda Road to Indy is very helpful,” Gutierrez says. “It’s a one-of-a-kind ladder, because if you start with US F2000 and win the championship, you win the scholarship for Pro Mazda. In Europe there’s a ladder – F3, GP3, GP2 and F1; the difference is they don’t give you a scholarship to move up the ladder. That’s what I like about the Mazda Road to Indy.” 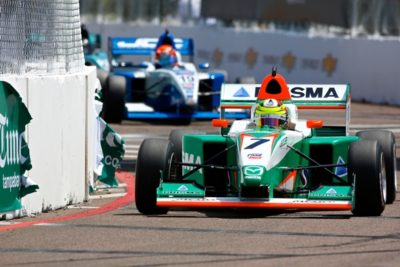 Gutierrez started on the second step of the MRTI ladder because he had already competed in a car similar to the Pro Mazda in a Mexican championship after he moved on from karts. He finished seventh in Pro Mazda points last year, and sits ninth in the championship for Juncos Racing heading into the finale at Mazda Raceway Laguna Seca.

“This year is a learning experience. I’ve learned a lot. The results aren’t coming, but I’m very positive. I’m testing a lot in the sim, iRacing, and it’s very helpful for me,” he says.

Racing isn’t his only passion; he enjoys soccer and lacrosse as well. “All my friends and almost all Mexicans love soccer; we’re all passionate for that sport. I’m the worst of my friends, but I have a little skill. Lacrosse, it’s very difficult sport. You use all your arms, knees, a lot of running. It’s very good exercise. You have to have good reflexes to react with the ball, because it’s very tiny and very hard. If it hits you, it really hurts!”

Gutierrez says he isn’t sure which direction he may go in next year, whether to stay in Pro Mazda for another year or attempt to move into Indy Lights. Right now he hopes to finish on a high note for Juncos Racing and is looking forward to Mazda Raceway.