May 4, 2014 (MONTEREY, Calif.) The only thing better than racing at Mazda Raceway, is winning at Mazda Raceway. Thanks to outstanding performances by Freedom Autosport and CJ Wilson Racing, it was a Mazda MX-5 Miata 1-2-3 podium sweep in the Continental Tire SportsCar Challenge Street Tuner race this weekend. The win moves Mazda into the lead in the manufacturers championship points chase.

For Freedom Autosport, it was their fourth consecutive class-win at Mazda Raceway perfect timing as the victory fell on Military Appreciation Day at Mazda Raceway, and the Freedom Autosport team races in support of the Injured Marine Semper Fi Fund. Randy Pobst and Andrew Carbonell teamed up for the win in the #26 Mazda MX-5. Battling them throughout the race were the two CJ Wilson Racing MX-5s. 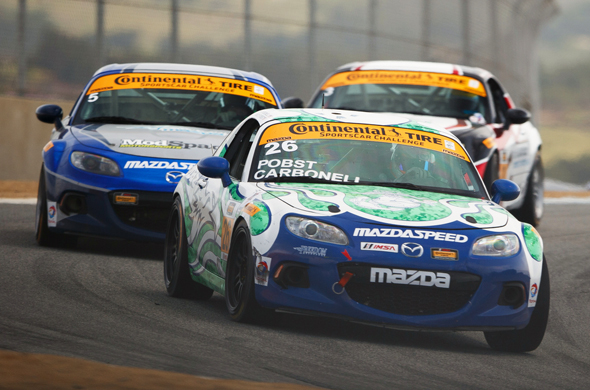 The weekend headliner was the TUDOR United SportsCar Championship where the Mazda SKYACTIV-D Prototype made its strongest run of the season. The #70, driven by Sylvain Tremblay and Tom Long, finished a solid seventh. The #07, driven by Joel Miller and Tristan Nunez had a great run until being punted off the track, while running with the leaders in fourth place. The contact caused extensive damage to the car and there was insufficient time remaining in the race to complete a repair.

John Doonan, Director of Mazda Motorsports, said, What a great weekend at our home track. We made very significant performance gains in the on-track development of our SKYACTIV Prototypes, running at the pace of the leaders. And to cap off the incredible weekend, we had a podium-sweep in Continental Tire Challenge, and the fans got to see two great MX-5 Cup races.

Other weekend highlights for the Mazda Motorsports team in Monterey included:

More racing in May:

About Mazda, Mazda Motorsports, and MAZDASPEEDMazda is a leading player in all aspects of sports car racing with an emphasis on endurance road racing. Mazda is the number-one brand for road-racers across North America among both club racers and professionals. Thousands of Mazda-powered grassroots racers compete in various classes with the SCCA and NASA highlighted by Spec Miata, the worlds largest spec class with over 2,500 cars built. Via the Mazda SportsCar Racing Academy, Mazda supports racers at all levels of the sport from club racing up to the TUDOR United SportsCar Championship where it races with production SKYACTIV Technology.

Mazda Motorsports is managed by Mazda North American Operations (MNAO). MNAO is headquartered in Irvine, Calif., and oversees the sales, marketing, parts and customer service support of Mazda vehicles in the United States and Mexico through nearly 700 dealers.Operations in Mexico are managed byMazdaMotor de Mexico in MexicoCity.