IRVINE, CA (October 25, 2021) – Mazda Motorsports has announced the recipients of its three Idemitsu Mazda MX-5 Cup presented by BFGoodrich® Tires scholarships and the two members of its factory team in the Spec MX-5 Challenge Series presented by Toyo Tires. The selections followed two days of on and off-track evaluation at Sebring International Raceway.

The competition began with 21 drivers in total, 12 for the Idemitsu Mazda MX-5 Cup scholarships and nine young karters for the Spec MX-5 Challenge team. Drivers were judged not only by lap times, but also ability to create lasting partnerships, understand and apply data analysis, and overall improvement.

After a comprehensive judging process focused on the on- and off-track skill sets and effort, Connor Zilisch, of Mooresville, North Carolina, was declared the winner, earning a scholarship valued at $110,000 to take part in next year’s Mazda MX-5 Cup.

“I can’t believe this happened,” Zilisch said. “I can’t thank Mazda enough. This is an amazing opportunity to forward my progress in the motorsports world and I’m so excited to get to work.”

Runner-up Bryce Cornet, of Norman, Oklahoma, was awarded a $75,000-value scholarship for his performance in the shootout.

“Thank you, Mazda Motorsports and all the partners, for an amazing opportunity,” Cornet said. “This is the spark my career has needed for a very long time.”

As part of Mazda Motorsports’ commitment to create opportunities for female racers, Laura Hayes, of Asheville, North Carolina, was declared the winner of the $75,000 Women’s Initiative Scholarship.

“I’m excited and honestly surprised to be standing here,” Hayes said. “I’m thankful for the opportunity to work with Mazda. I’m new to the Mazda family. I hope to make you proud.”

The trio of scholarships is only the start of Mazda’s prize fund. Racing in the 2022 MX-5 Cup, these three drivers will have a shot at the $80,000 Rookie-of-the-Year award and the $250,000 championship prize.

“Mazda is proud to support these incredible drivers in their quest to become professional racers,” Applegate said. “What we’ve seen today makes me very enthusiastic for next year’s Idemitsu Mazda MX-5 Cup. Connor is impressively wise beyond his 15 years. He and Bryce are a testament to the talent among Mazda club racers. Additionally, it’s great to continue our Women’s Initiative and welcome Laura to the Mazda family.” 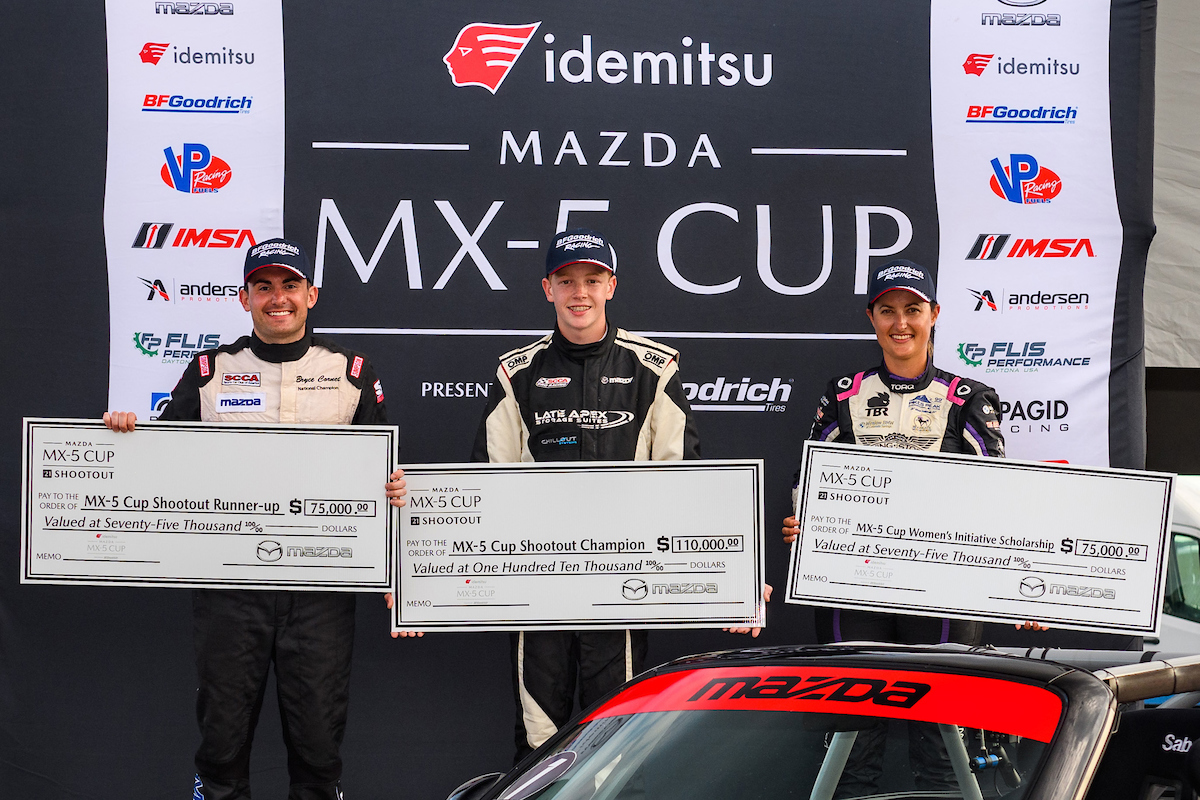 Making the leap from karting to sports car racing is a daunting task, but Westin Workman, of Charlotte, North Carolina, and Nate Cicero, of Pound Ridge, New York, will have a leg up on the competition. As Mazda club racing factory drivers, the duo will receive financial support, testing opportunities, a driver coach and motorsports mentor to guide them through the motorsports industry and so much more.

“Seeing these young drivers in person during the course of our two-day shootout only strengthens our desire to support the karting community,” Cook said. “eKartingNews.com helped us discover nine amazing racers and people in our finalists. Selecting the two recipients was very difficult for Max Papis, Chris Nunes, Jim Emerson and me. We are proud of them all and excited about the future for each.”

Without the parity in the Shootout cars, the judges would have had an even more difficult making their selections. Flis Performance prepped and tended to the MX-5 Cup cars, while W2 Racing, Panic Motorsports, and Formidable Racing Development took care of the Spec MX-5 cars.