Comparing brake pressure data with other parameters may show a driver some areas where free speed can be found.

Beginning racers may not understand just how critical braking is to fast lap times. Many come into the sport believing that the key is spending as little time on the brakes as possible. While that can be an important component, with experience comes the knowledge that how a driver gets on and comes off the brakes is just as important as where and when. 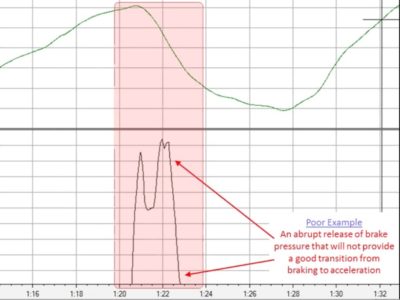 “One of the most critical steps between just a regular driver and becoming one of the fast guys is at the end of the brake zone – being able to come off the brake slowly and at the same time carry more speed into the corner (see example left),” explained pro driver Randy Pobst.

“It’s really difficult for drivers to make that breakthrough because they feel like they’re coming into the corner faster, and what do you want to do when you’re going too fast? Brake more. At the end of the brake zone, you want to start releasing the brake but continue braking for the same reason you roll the throttle on gradually – smoothness. It’s blending what was straight-ahead braking into full cornering. You want to see that brake pressure gradually coming off. It’s a technique, strategy, capability that separates the mid-pack from the fast guys. It’s being able to ease off the brakes and blend the end of the brake zone into your corner. And we can see that on the data very clearly.”

AiM Sports Training Manager Roger Caddell showed a brake pressure trace with a big dip in the middle (top), where it shouldn’t be. After the driver did maximize the brake pressure, he or she completely dumped his foot off the brake pedal. “So he stood the car on its nose, then got off it, then stood it on the nose again and then got completely off, so the car is a bit of a rocking horse. You end up wearing tires out and you’re not as fast in the corner,” he said. 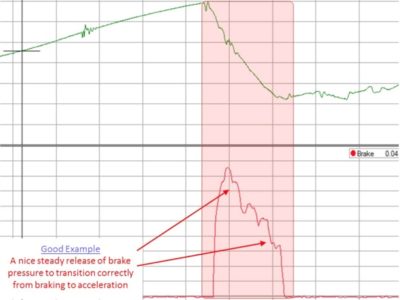 Turning to a good example (see graph on the right), Caddell notes the peak pressure in the middle of the brake application, then a steady release until the driver is ready to go to the throttle, once the trail braking is done and the car is rotated.

Another area Caddell and Pobst note is consistent braking during downshifts. Drivers may not realize that they are changing brake pressure as they blip the throttle to make a downshift approaching a corner, but the data illustrate exactly what’s going on. 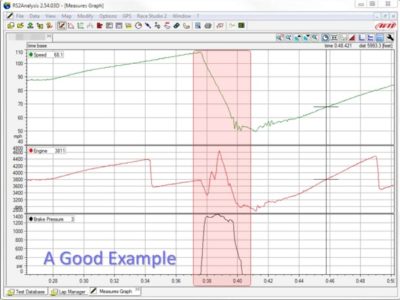 “Every time you see the blip on the throttle, you see the movement of the brake pressure,” Caddell said. “You can see the inaccuracy of the driver’s feet on the brakes, and this again is upsetting the apple cart, turning the car into a rocking horse. It’s loading and releasing, loading and releasing; it’s going to hurt the tires and it’s going to hurt speed.” He then showed a better example (left), where brake pressure fluctuation was under 10 percent as the driver blipped the throttle.

It’s a use of data of which many drivers don’t take advantage. It’s easy to note when the brake pressure is applied and how much; leveraging the data to see exactly how it’s applied and released can give the driver a smoother transition from brake to throttle and, ultimately, lower lap times and better tire wear.