Using different friction at each end of the car can help balance your braking setup, even when there is no hydraulic brake bias adjustment available.

With the huge variety of brake pad compounds available, it’s fairly simple to find the right combination of wear, temperature and torque that a driver needs for whatever he or she is racing. While that may not always be a racing pad, the existence of pads designed for racing opens up many more possibilities, even for those who race production-based cars.

The variety also makes something else possible: using different compounds front to rear to balance the braking, to help ensure that one end doesn’t lock up before the other under heavy braking. 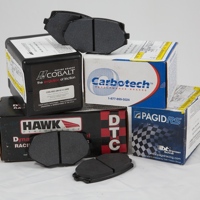 “It’s almost understood that in most vehicles you don’t run a square compound setup, unless you have a perfect 50/50 weight distribution or you’ve got a rear bias distribution,” says Andie Lin, Cobalt FrictionTechnologies’ director of advanced materials. “Most vehicles that are club raced don’t have that kind of distribution. It really depends on the chassis of the car – is it front engine/front-wheel drive, mid-engine, front/rear…it really depends on that, the dynamics of the chassis itself. When you look at brake compound setup, it’s really just one component of the entire chassis.”

Given that, then the first question that comes to PAGID Racing’s Motorsports Application Engineer Ian Berwick’s mind makes perfect sense.

“The first thing I always ask is, ‘What tires are you running?’ Because the more grip you have, the greater the probability of needing a torque split front to back. Some cars come from  the manufacturer with enough rear brake bias so that on street tires, say 200 treadwear rating or above, the ABS engages on the rear axle first. Once you start putting on a really grippy compound tire, now you’ve shifted your workload to the front without reducing your rear braking ability. At that point, you would want to have a fairly aggressive front pad on the car and reduce the rear, or retain it as it is from the factory,” Berwick explains.

At first it may sound odd to reduce your braking capability at one end of the car. The reality is that you’re not reducing your overall braking capability – most of that is handled at the front anyway, thanks to weight transfer – but rather keeping that capability under control and reducing the chance that the rear tires are going to start locking up way before the fronts do.

One thing to keep in mind is that the less aggressive pads on the rear may come in at a much lower operating temperature, and produce more torque at ambient temperatures than the more aggressive front pad, so the car may feel odd and actually have a rear bias until everything is nice and hot.

Finally, Lin has some advice on the matter specifically for Spec Miata drivers: “A Spec Miata is a very light car; it’s a momentum vehicle, not a brute force vehicle,” he says. “It tends to lock the passenger side front brake when you are trail braking or braking very hard with any kind of steering input – it will be the inside, if you’re turning right. Keeping that in mind, we need a solid initial bite so we can get confident stopping power, but we don’t want to overload the brakes so that we lose time by locking up the passenger side. That being said, we generally run two or three compound levels lower, because the rear of the vehicle tends to lift up. On a Spec Miata, you’re going to want to run a staggered compound setup for 90 percent of the drivers. If it’s a driver or track combination that promotes very fine braking and minimal turn-in trail braking, then you can get a little less stagger to promote that straight-line braking potential.”

Lin notes these are guidelines, and what someone else is using, even on the same type of car, may not work for you. Talk to the manufacturers, and they’ll know the right questions to ask.