Bryan Ortiz has been trying to win the Idemitsu MX-5 Cup presented by BFGoodrich® Tires championship for three years. His hard work has now paid off, and he’s already been rewarded by the announcement that he will be driving the new Mazda3 TCR next year in Michelin Pilot Challenge competition.

“The first year, I didn’t know what to expect and I think I was a little too aggressive at some points,” he says of his MX-5 Cup performance. “Last year we were the fastest car, we just got caught up in three different incidents that were not under our control. Finishing only one of those would have gotten us the championship. This year it was, let’s finish every race [and] be as consistent as possible. That’s what we did, finishing in the top six every race.

“I think Selin [Rollan] was the fastest guy out there all year long and [Robert] Stout, mid-year on, was another one that that was extremely fast,” Ortiz continues. “But they made mistakes or had bad luck at some point. We did it even having issues … I think consistency and being there every race was the difference this year.”

Ortiz, who hails from Puerto Rico, first got hooked on racing when he was 11-years old and went to watch a friend race karts. He started racing karts himself, did some Formula Renault racing, and was eventually chosen to participate in NASCAR’s Drive for Diversity program, but sponsorship woes kept him from advancing too far up the stock car ladder. Then he was racing in Puerto Rico and Florida for a fellow Puerto Rican and coaching his son before getting on board with the Bella Group, distributors of Mazda and other brands in Puerto Rico. That’s how he first went racing in MX-5 Cup.

Now, three years later, Ortiz has seen how hard it is to win an MX-5 Cup race, let alone a championship, and he says it makes him feel really good to have done so in such a competitive series.

“MX-5 Cup is one of the toughest series out there,” he says. “You really don’t know what’s going to happen in any of the races. You could be the fastest car in practice, and the race is just another thing. The draft has so much of an affect on the races that it makes anything possible. You see a lot of last-lap passes in almost every race. It’s very unpredictable and difficult.

“There are a lot of great drivers and we are all racing very hard,” he says, adding that the fact that the racing is so hard and close with very little car-to-car contact is one of the things that has impressed him about the series. 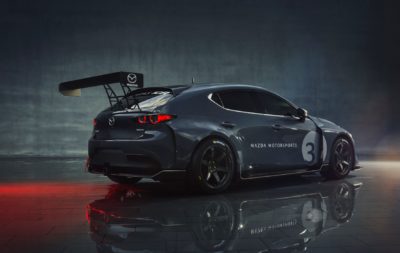 Ortiz is now on to his next adventure, driving the Mazda3 TCR in Michelin Pilot Challenge competition next year. That’s where his Mazda $200,000 career advancement scholarship is going, and he thinks it’s probably a bit of serendipity that he finally won the championship this year so he can compete in a Mazda in 2020.

“I’m extremely happy and fortunate to have that opportunity,” he says. “I was thinking, everything happens for a reason. Last year, if I won the championship, it was not going to be as exciting as this year.

“I won, and am going straight to a new program and factory effort, and a new car,” he concludes. “For me, it’s more about the opportunity to work hands-on with a new car, engineers, and develop a car. It’s going to be a great opportunity for me and I’m looking forward to it. I just can’t wait to get into that car and drive it.”