MONTEREY, Calif. (Sept. 21, 2019) – His race weekend got off to a tumultuous start, but Bryan Ortiz did what he needed to do to capture the 2019 Idemitsu Mazda MX-5 Cup presented by BFGoodrich® Tires® Championship on Saturday. Selin Rollan won Race Two, but Ortiz came home third to clinch his first-ever Mazda MX-5 Cup title.

Starting from seventh after a shaky qualifying session with a new engine, Ortiz had a tremendous start, rocketing his No. 4 Copeland Motorsports MX-5 to third on the first lap. Ahead of him, Sick Sideways teammates Rollan and Drake Kemper battled for the lead, which gave Ortiz the opportunity to take the point. Rollan was not to be denied, however, and retook the lead the following lap. 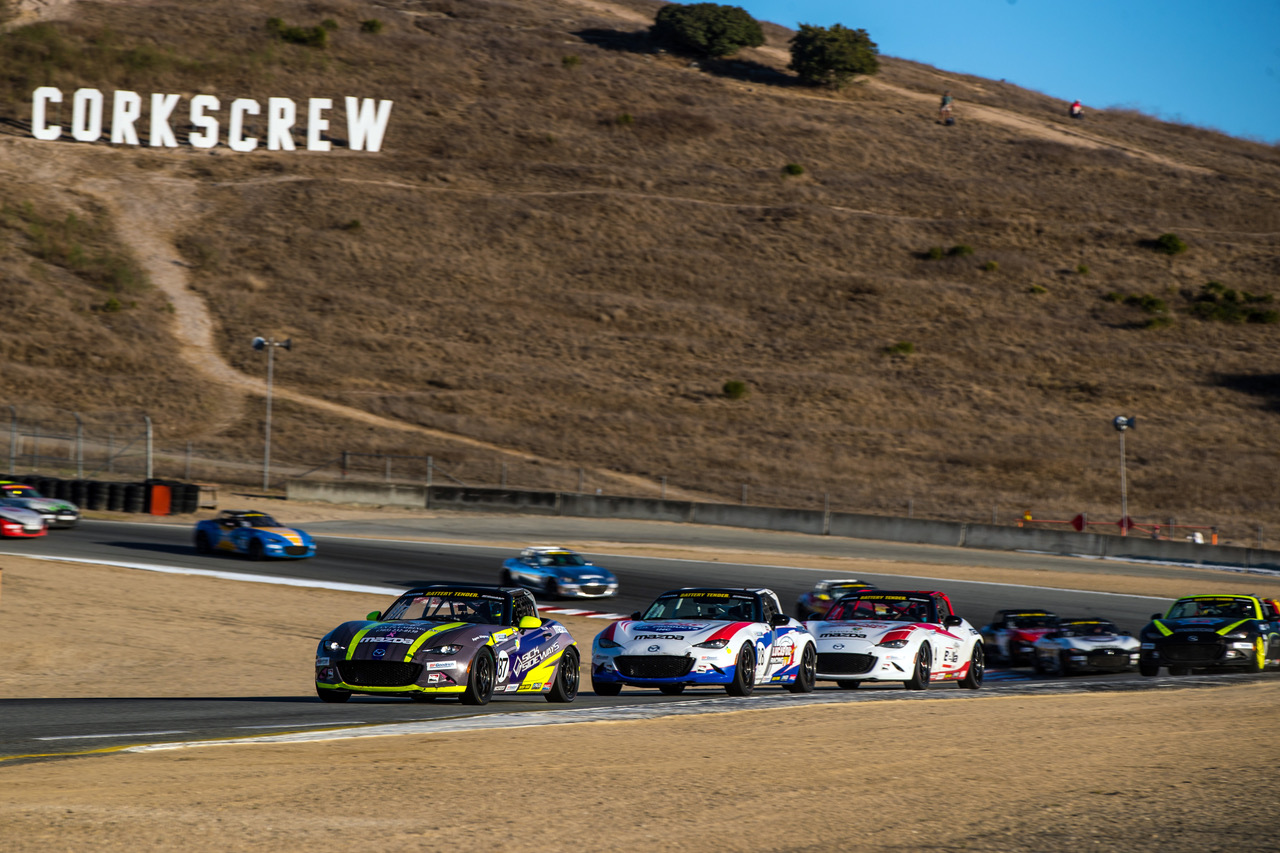 The trio continued to trade spots following two full-course caution periods that slowed the early stages of the 40-minute race. Rollan (No. 87 Sick Sideways Racing) began to pull away with 10 minutes remaining in the race while Kemper and Ortiz traded paint behind him.

After mechanical issues ended his Race One early, Rollan took his fifth victory of the season by 1.0416 seconds over Kemper.

“It was crazy,” Rollan said. “I knew I needed to win the race and I really wanted to win the race, especially after finishing last earlier today. This season has been about redemption it seems like. I will get one not so good finish and then I’ll get a win. That’s the inconsistency that cost me the championship. If those weren’t there I would have been champion, I know that. But congratulations to Bryan [Ortiz], he did an awesome job. He’s a great competitor and a great person, so I’m happy that he got it.”

Ortiz crossed the finish line in third and though Rollan won the race, received a point for pole position and a bonus point for leading the most laps, it wasn’t enough to surpass Ortiz for the Championship. 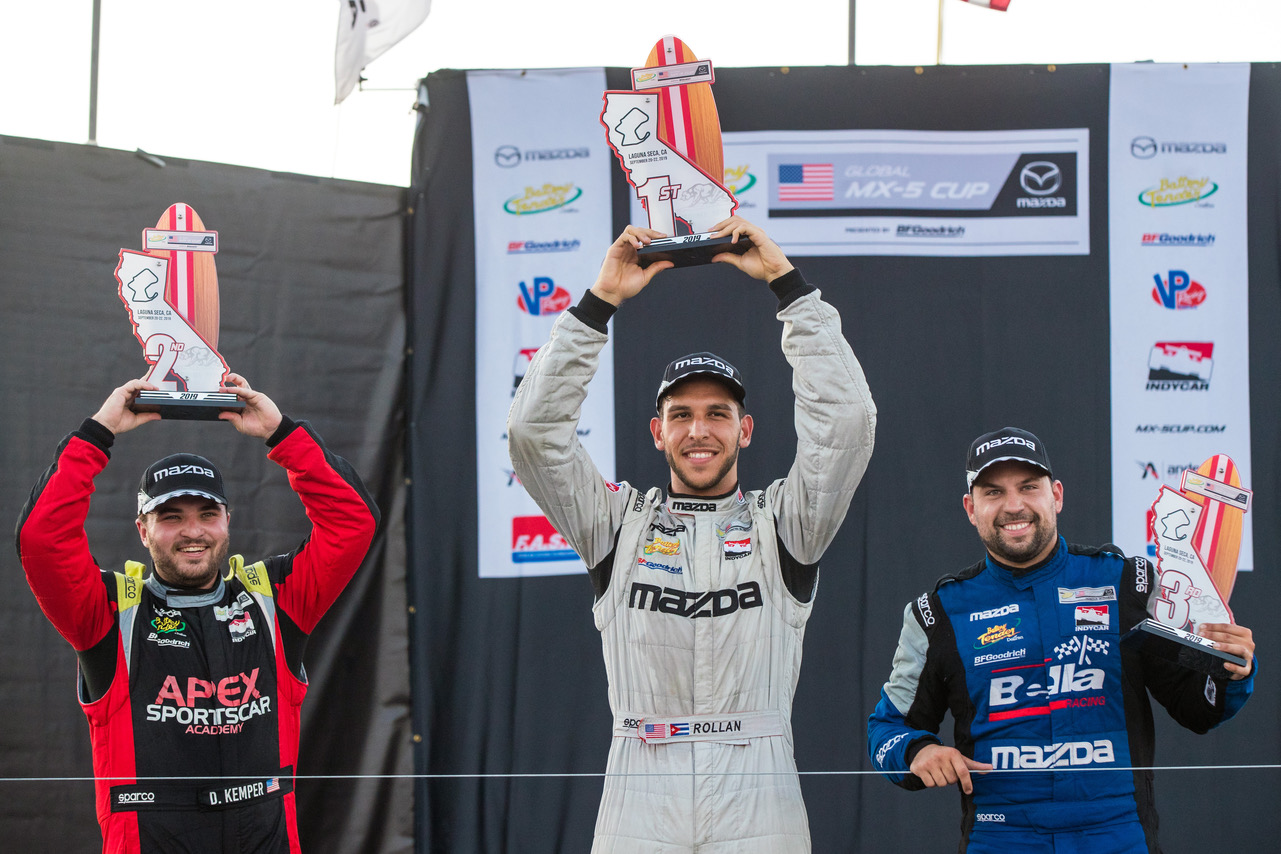 “The first race, we had a problem but we worked hard for the second race,” Ortiz said. “I didn’t know what to expect, but we had a great start and were able to stay in front of [Robert] Stout. It’s great to finish on the podium and secure this championship. We’ve been close before. This year it was very, very intense. This is my first pro championship and everyone is here and my sponsors are here: it couldn’t be a better day. I have my brother, my dad…everyone is here so I’m very happy.”

Ortiz had another reason to be happy: the $200,000 prize from Mazda for his Championship.

Kemper, who won the first race of the season, was an early pick to take the 2019 title, but a mid-season run of bad racing luck in his No. 99 Sick Sideways Racing saw his advantage erased ahead of the season finale. 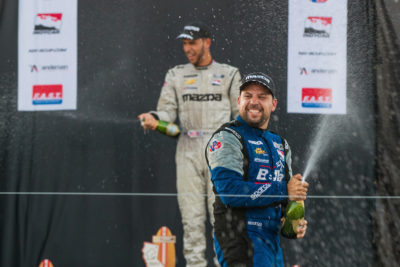 “Five podiums in six races was a good start but, unfortunately, we had those four bad rounds in-a-row,” Kemper said. “But, that’s racing and that’s how this championship happens. I’ve led this championship every single year I’ve competed in it. Mazda MX-5 Cup will never be an easy championship and there’s a lot of people who deserve the championship, but if everyone could win, it wouldn’t be racing.”

“I honestly think I just wanted the win today more than anyone else, and unfortunately contact happens, I got a little squirrelly, and Selin used that as his opportunity to get away,” Kemper added. “I’ve got to say that was probably the hardest MX-5 Cup race I’ve ever had in my life. I’ve driven Laguna in the rain, and in the foggy conditions where you can’t see, and this is probably the hardest conditions I’ve ever had. With the sun in that position, you can’t see turn nine, you can’t see turn 10, you can’t see the exit of turn four – we were just guessing out there but guessing wheel-to-wheel.” 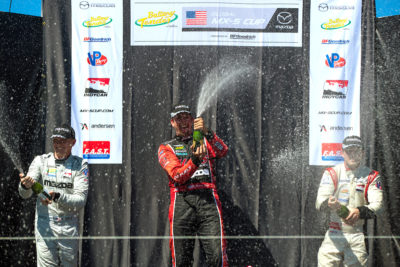 Rollan’s win enabled him to slide past Stout in the points and finish runner-up in the final Championship tally.

Michael Carter (No. 08 Copeland Motorsports) solidified his Rookie of the Year title with a fifth-place finish in Race Two. The Mazda Road to 24 Scholarship Winner will collect a $75,000 check for his efforts.

Just behind Carter was fellow rookie Gresham Wagner (No. 5 Sick Sideways Racing) who took home a check of his own—$1,000 for him and another $1,000 for his crew chief—for winning the Idemitsu Hard Charger of the Race Award. Wagner advanced 11 positions during the race. 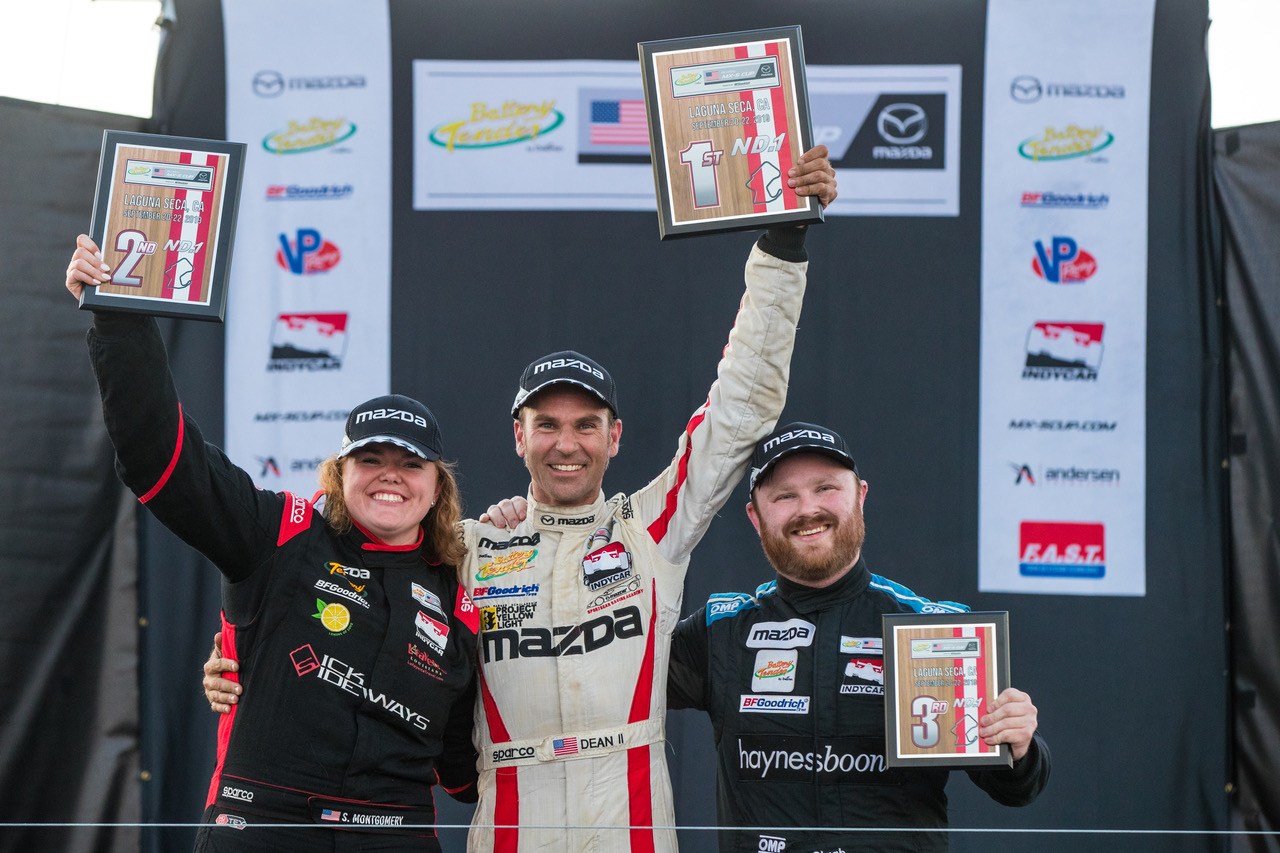 Rollan’s team owner, John Dean II (No. 16 Sick Sideways Racing), finished the 2019 season with a nearly perfect record in ND1. His win in Race Two brought him to a total of 11 out of a possible 12 race wins for the year, but his post-race thoughts were mostly about his teammate.

“It was a really a bummer in race one with Selin getting knocked out of the championship with a transmission failure,” Dean said. “He stayed really level headed though. He’s been driving really well, especially the second half of the season. Even though he didn’t win the championship, he proved how fast he really is. I am so happy he was on the team this year, I can’t be more proud of him. Congrats to Bryan on the win, he’s awesome. It couldn’t have happened to a better guy.”

Dean led his teammate Sarah Montgomery across the finish line. It was the fourth podium in-a-row for Montgomery and second runner-up finish in-a-row.

“All my teammates, we won a lot of races and set a lot of records,” Dean added. I’m just super happy as team owner and a driver. Sarah took four podiums. I’m ecstatic!”

David Staab completed the ND1 podium in third. It was the rookie’s first-ever podium finish.

The season champions and award winners will receive their hardware on Sunday evening in Monterey, California. All of the 2019 MX-5 Cup races are available on the Mazda USA YouTube channel.