LEXINGTON, Ohio (July 28, 2019) – The patience displayed by Idemitsu Mazda MX-5 Cuppresented by BFGoodrich® Tires® drivers in Round Seven at Mid-Ohio Sports Car Course was tucked away for Round Eight, where Robert Stout claimed victory with a last lap pass on Robert Noaker. In ND1, John Dean II scored the win and swept the Mid-Ohio weekend.

The 45-minute race showcased the very best of Idemitsu Mazda MX-5 Cup racing, including zero safety car periods, 267 passes for position and five lead changes at the line. With the top 14 cars running nose-to-tail for the first 30 minutes, it seemed anyone could win.

The main players at the front of the train were Stout, polesitter Selin Rollan (No. 87 Sick Sideways Racing), and Saturday’s Race One winner Noaker. Stout led the first third of the race, withstanding constant pressure from both Rollan and Noaker.

“My competitors were not patient and did not pick the right moments to race,” Stout said. “There were moments when we could have pulled away from the pack, but others wanted to pass at every moment because they were impatient.”

Rollan and Noaker moved past Stout and traded the lead for a time, but a mechanical issue for Rollan with less than five minutes remaining took him out of the fight.

Noaker led Stout’s No. 28 McCumbee McAleer Racing car past the white flag. When the pair got into the Esses, Stout used a move seen several times over in the race to take the lead for good. He crossed the finish line 0.1292-second ahead of Noaker.

It is Stout’s first Mazda MX-5 Cup victory since Toronto in 2017.

“(Robert) Noaker and myself have been racing each other hard all weekend and I have really enjoyed it,” Stout said. “I know I can trust him to be smart on track. That last pass stuck and I am glad to have crossed the line first. I feel like I have gotten the monkey off my back after the frustration of getting to the podium but not securing that win until now.”

Like yesterday, Noaker’s No. 13 Robert Noaker Racing machine led the most laps of the hotly contested race. Unlike yesterday’s race, Stout’s last lap bid for the win worked. 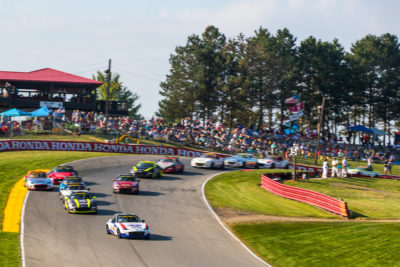 “It is really difficult to not lose focus when you have so many cars behind you, but it’s like this every weekend in this series,” Noaker said. “After a while, you know where you can get a break. I was definitely surprised [by Stout’s pass]. It was the same move as yesterday, but today I got pushed off the track.”

Gresham Wagner took the final podium spot in Round Seven and did the same in Round Eight. He had to fight his way back to third in the No. 5 Sick Sideways Racing car after a slow start.

“At the start of the race, it was difficult to hang on because the car had not come in yet while people were already being aggressive,” Wagner said. “I settled in and worked on getting past each car – one by one. It was a hard race and I do think I had luck on my side with some of the racing incidents. Being patient was the key today. I will have to be at the right place at the right time to get the win.”

Mazda Road to 24 Scholarship winner Michael Carter finished fourth in the No. 08 Copeland Motorsports car, while Luke Oxner completed the top five in his No. 77 White Racing entry.

Though he finished sixth, Bryan Ortiz (No. 4 Copeland Motorsports) leaves Mid-Ohio with the points lead after a rough weekend for both Rollan and Drake Kemper (No. 99 Sick Sideways Racing). Provisionally, Ortiz leads Stout by two points (165-163) and Stout is third with 159 points.

Peter Ensor earned the Idemitsu Hard Charger Award. He improved eight positions in the race, starting 17th in the No. 49 Atlanta Speedwerks car and finishing ninth.

The champion of the ND1 class for previous year’s Mazda MX-5 models will win $100,000 from Mazda.

Round Nine and Ten of the Idemitsu Mazda MX-5 Cuppresented by BFGoodrich® Tires® will take place at Portland International Raceway with the NTT IndyCar Series, August 30 – September 1.