Logan Clampitt won the Mazda/iRacing Hot Lap Challenge, so Mazda put him behind the wheel of an MX-5 Cup car

Logan Clampitt has won races, but until recently, he’s never been in a race car.

Those races he’s won, including the finale of the Mazda Hot Lap Challenge, have all been virtual. But as a result of winning the Hot Lap Challenge race, he recently had his first laps in a MX-5 Cup car at The Thermal Club, a private country club racetrack near Palm Springs, Calif., with Mazda factory racer and racing coach Joel Miller guiding him.

“The test was obviously a dream come true,” says Clampitt, a Southern California resident and student. “Racing has been my dream since I was 7- or 8-years old, and I would do it again if I had the choice. Everyone was super nice and the Thermal Club was a really nice place to go.”

Making the transition from virtual racing to real laps wasn’t too difficult for Clampitt, he says, but there were two things he had to deal with. The first was learning to drive a manual transmission and work on heel-and-toe downshifting; Mazda loaned him a street Miata for that purpose. The second was dealing with g-forces, something not experienced in virtual racing.

“The first laps I was fishtailing quite a bit,” he explains. “Once I got into the second session, I started to get a little better, started to get more consistent and I started to learn more. In the first session, it was definitely a struggle with the g-forces, since I wasn’t expecting it that much. But I overcame it during the next two sessions.”

Miller was there to give Clampitt some guidance. Beyond the initial heel-and-toe instruction, he says Clampitt picked up much of the basics quite quickly.

“You could see straightaway that we didn’t have to talk about lines, we didn’t have to talk about apexes or where to place the car – that was natural,” Miller says. “We started the day with me driving and he rode with me, and we stepped it up each lap. After 10 minutes, he was like, ‘Wow!’ Those were some feelings he had never experienced before. The MX-5 Cup car doesn’t generate a lot of g-forces [says the man used to open wheeler race cars and prototypes generating immense downforce], but he’s never felt a car go around a corner before. Cornering, the sensation of when you hit the brakes and you’re thrown into the belts, those forces that pull on the body were new to him. But he immediately got familiar with the car and we were right down to semi-competitive times.”

Aside from the g-forces, Miller says there were a couple of other revelations for Clampitt that came from the test. The first was that this is real life with no reset button, a lesson learned in a little off that resulted in no damage, but brought new respect from Clampitt for the car and driving. The other is that driving race cars is hard work, and Clampitt was tired at the end of the day. “He handled it all, so that was good to see; but he had a great time there at the end of the day acknowledging the realness of it,” says Miller.

Miller’s suggestion to him was to get a Spec Miata and burn plenty of laps at a track like Buttonwillow or Willow Springs, where there are very few walls to hit. Clampitt says he faces some challenges with that idea, but he’s no less enthused about racing, and even more so after the test. 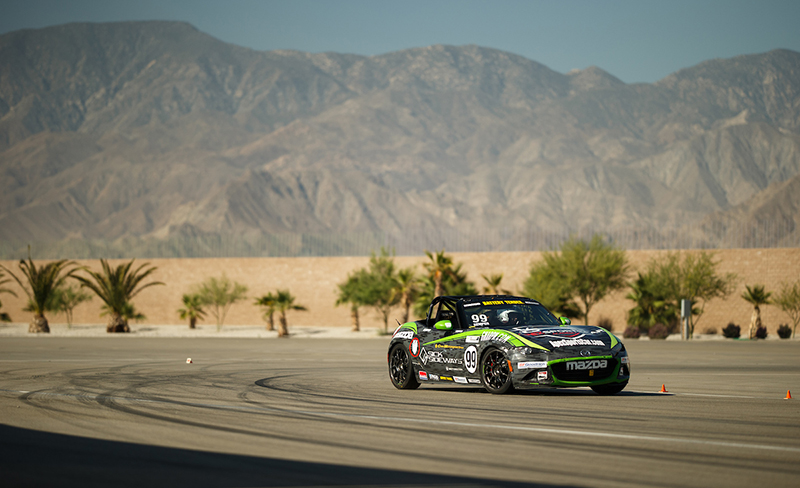