ELKHART LAKE, Wisc. (June 22, 2019) – The second half of the Alana Long 100 at Road America was another barn burner for the Idemitsu Mazda MX-5 Cup presented by BFGoodrich® Tires®, with Selin Rollan taking his second victory of the season.

The event was named in honor of Alana Long, a cherished member of the Mazda racing family who was lost after a long fight with cancer. Long was a ardent supporter of Lemons of Love (http://lemonsoflove.org), which provides Chemo Care Packages for patients in treatment. Both races on the weekend saw two Lemons of Love-associated entries doing battle for the win.

The race’s first and only full-course caution came out during the opening lap of the 45-minute race for Zach Lee’s stranded No. 48 McCumbee McAleer Racing car in Turn Five.

On the restart, Kemper made a charge for the lead, as did Mazda Road to 24 Scholarship Winner Carter. Carter and Kemper officially led four laps each before Robert Stout took his turn up front in the No. 28 McCumbee McAleer Racing MX-5 with 10 minutes to go.

The lead pack of seven cars swapped places in every corner around the 4.048-mile road course. It was entirely possible for any of them to win even as the white flag came out.

On the final lap, Kemper lost the lead to Rollan early in the lap. Kemper was then in a tough fight with Stout and Danny Bender. The jockeying for position between the three allowed Rollan to pull away just enough to take the checkered flag without challenge. It is his third win of the year.

“Yesterday’s race wasn’t that great for me,” Rollan said. “I got the tough end of the stick in a lot of situations. I went into today’s race with the same mentality, to just keep it clean and have a good race. I’ve been on a bad streak with race control and I wanted to end the streak, and today, I did. I made that move on the last lap and they were fighting behind me, so I kept my head down and I knew they wouldn’t get a run on me. Third win of the season is great; I didn’t think this was going to happen.”

With the lead secured, Rollan was happy with what he saw in the rearview mirror to ensure his advantage all the way to the checkered flag. 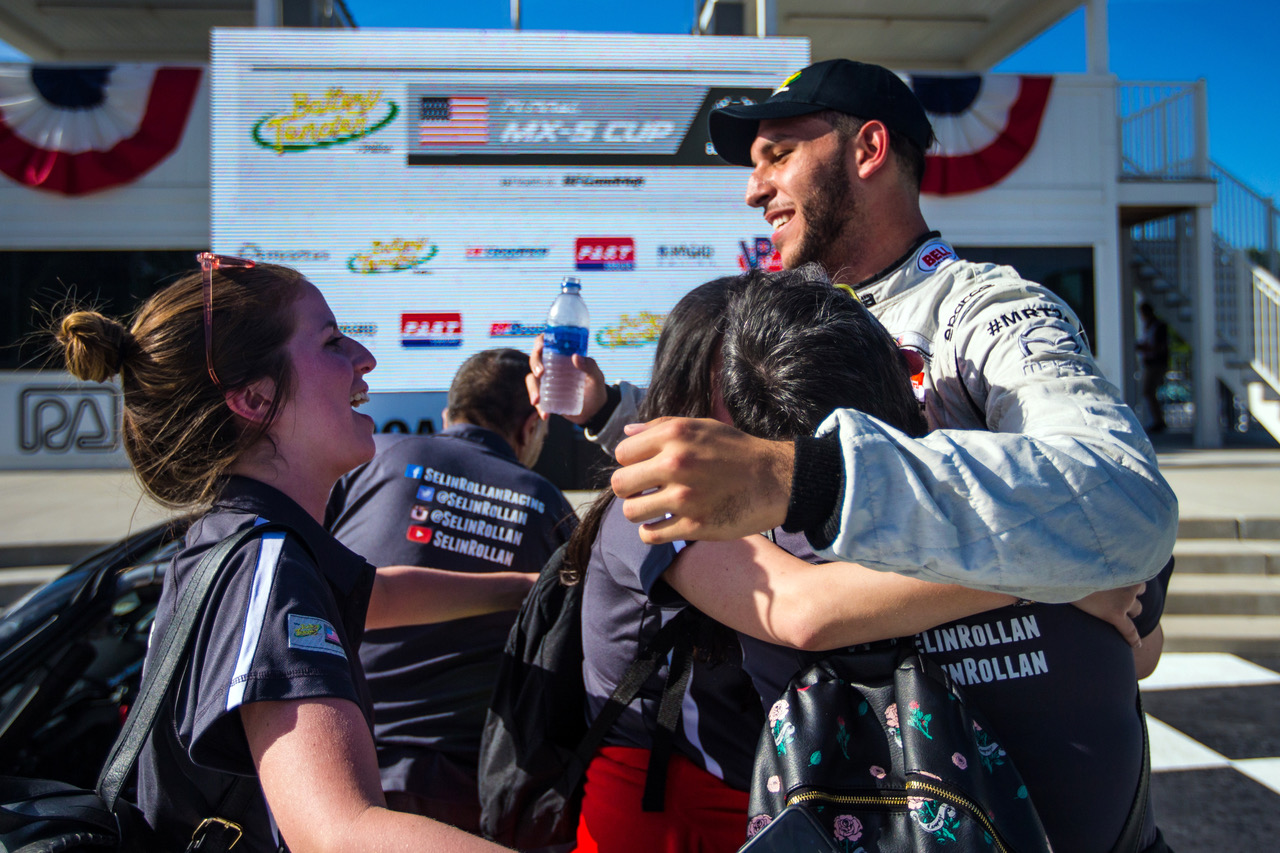 “I was happy to see the guys fighting behind me, but I also didn’t know if it was going to be enough” said Rollan of his gap. “The power of the draft is strong, so I didn’t know if they were going to get by. Once I got out of Turn 14—which I knew I had to have a perfect run out of 14 —and crested the hill I knew I had the win.”

Kemper, who finished third in Friday’s race came home in second. He has now taken over the Championship lead as he looks to claim the $200,000 prize on offer from Mazda for the ND2 series champion.

“It was a good, hard race,” Kemper said. “The last lap was probably a little more aggressive than I would have liked it to be. Ultimately, I took back the driver championship lead and we got here for Alana Long and Lemons of Love and I know that she is smiling down on us.”

Stout appeared to have the winning car late in the race, but fell victim to the draft in the final lap and had to fight hard to stay on the podium.

“I am happy to be back up on the podium and I think we had one of the best cars on the track,” Stout said. “I made a really, really minor mistake that ended with a big consequence which took me out of contention for the win. It was my fault and it was a mistake that I very rarely make, but it happens. I was pretty happy with the car, it was a little tight coming at the beginning of the race but of course the higher temps caused it to grease up after a little bit. Today it was just about being in the right place at the right time on the last lap. I’m happy with third place, just not everything I wanted.”

The ND1 race generated one of the most thrilling finishes of the year so far. John Dean II’s (No. 16 Sick Sideways Racing) five-race winning streak was finally broken by Hernan Palermo in the No. 20 Slipstream Performance car. The pair traded the top spot throughout the 16 laps race, which allowed Nathanial Sparks (No. 8 Sick Sideways Racing) to catch them and make it a three-way fight.

It was a photo finish at the end with Palermo taking the win over Dean by a mere 0.0127-seconds.

“I was just glad that I had a really great car and I had some help along the way,” Palermo said. “The last lap John [Dean II] and Sparky [Nathaniel Sparks] got together and I thought it was going to be a bad last lap for me, but it ended up working out. The ideal situation would have been to pass them into Canada Corner, but I just wasn’t close enough. I had just gotten around Sparky so it put me back a little. It feels great to get my first ND1 win, I’ve been close a couple of times but never quite got it, and now I finally did.”

Finishing third in ND1, Sparks earned his second Idemitsu Hard Charger Award of the weekend, picking up 15 positions in the race.

“The yellow helped out because it closed the gap, which increased the number of passes that I had,” Sparks said. “I’m excited to have received the Hard Charger Award. It’s great for the teams and great for the crew chiefs and it’s awesome to be able to reward the guys that get it done out there. I appreciate Idemitsu for giving out the award and I’m really proud to represent it.”

Both races from Road America will be available on the Mazda Motorsports YouTube page shortly.

Next up for the Idemitsu Mazda MX-5 Cup series is Rounds Seven and Eight at Mid-Ohio Sports Car Course in Lexington, Ohio, July 20 – 22. Both races will be streamed live on www.MazdaMotorsports.com.