ELKHART LAKE, Wis. (June, 21, 2019) – Robert Noaker scored victory at Road America on the final lap of Friday’s 45-minute race, the first of two races that will make up this weekend’s Alana Long 100. The 15-year-old showed poise beyond his years in taking his second Idemitsu Mazda MX-5 Cup presented by BFGoodrich® Tires® race win after the field once again staged a thrilling run to the checkered flag.

Noaker earned a spot in the Guinness Book of World Records last year after taking his first win at Mid-Ohio Sports Car Course. He is officially the youngest driver to win an IndyCar-sanctioned race (14 years and 178 days old). Like his Mid-Ohio win, Noaker (No. 13 Sick Sideways Racing) started several rows back on the grid, patiently made his way up to the leaders and then fought tooth and nail for the top spot.

Mazda Road to 24 Scholarship winner Michael Carter (No. 08 Copeland Motorsports) was an early leader before the first and only full-course caution was issued. Tyler Gonzalez needed to be retrieved from Turn One after running wide and making contact with the wall in his No. 57 Copeland Motorsports car.

Green flag racing resumed with 23 minutes left on the clock. Carter was swarmed by Tyler Maxson (No. 74 Copeland Motorsports) who led briefly, but was then overtaken by Drake Kemper (No. 99 Sick Sideways Racing).

Kemper officially led six laps of the race and all of them were in a constant battle with Danny Bender in the No. 18 McCumbee-McAleer Racing MX-5.

There were 343 total passes for position in the race. It was Noaker though, who made the right pass at the right time, getting Kemper into Turn One on the final lap and keeping the wolf pack behind him until the checkered flag. 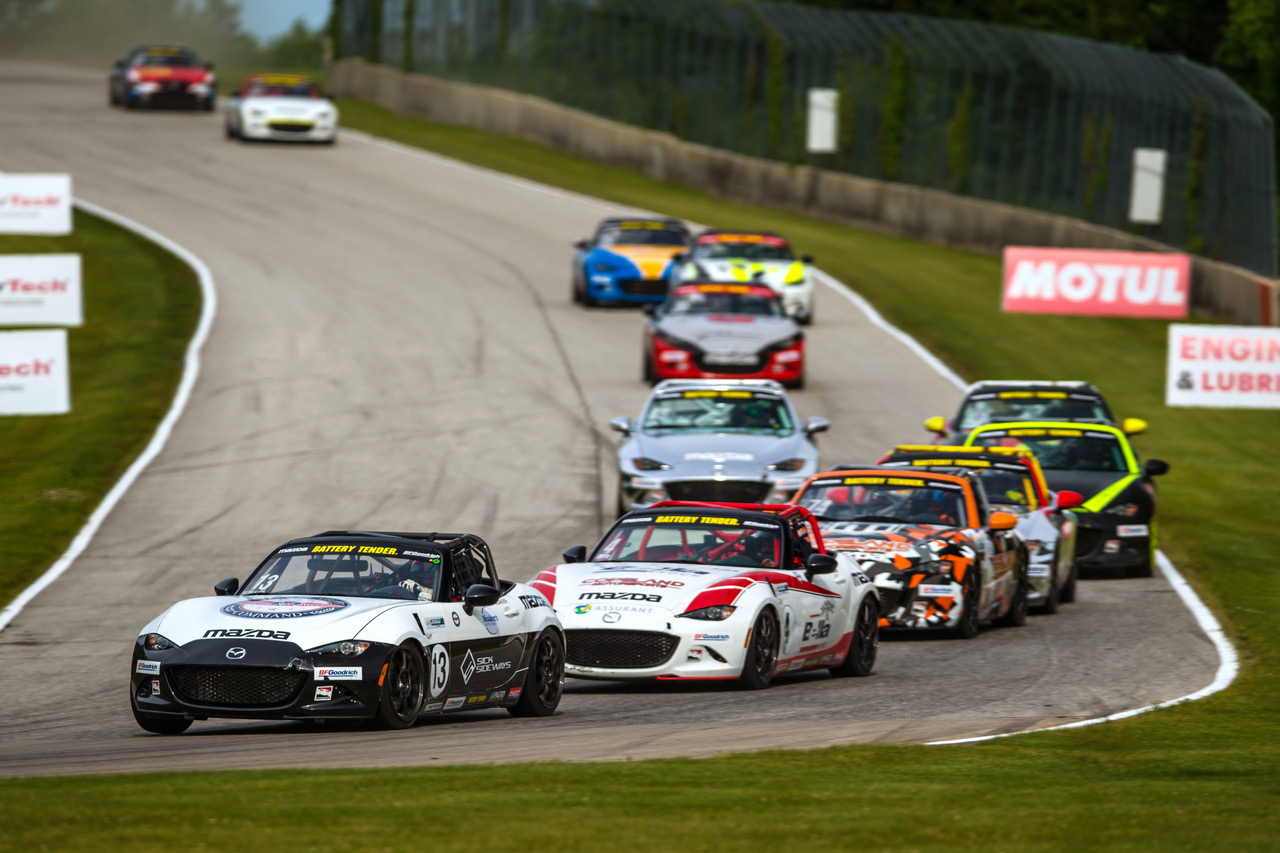 “I was sitting around fifth through seventh the whole race and then I found myself in third and I thought ‘wow how did I get here,’” Noaker said. “On the last lap I was able to make the pass for the lead going into Turn 1. Luckily, they were still battling behind me and I was able to check out toward the end of the lap.”

In his Idemitsu Mazda MX-5 Cup debut, Bender came away with a runner-up finish. Bender won his No. 18 McCumbee McAleer Racing MX-5 in a raffle put on by Lemons of Love, which is a charity that creates care packages for cancer patients undergoing chemotherapy.

“That was a phenomenal race,” said Bender. “I started the race in fourth and then got pushed back a little bit. I haven’t run in this series before so it took a couple of laps to figure out how everyone drives. When you expect people to work with you and then they don’t, you learn how to manage that. So I started pushing my way forward and got behind Drake [Kemper] and tried to push him the whole way. The trick here is to be in second going into Turn 14. We all came out of the last corner strong and Drake and I were able to finish second and third which was awesome!”

Kemper was just happy to finish, let alone on the podium, after taking a rock to the eye on lap two. He had a hard time advancing from his eighth-place starting spot at first, but was on a charge in the final 15 minutes. He officially led six laps of the race, but not the one that counted.

“The change to fifth gear is literally 500 feet later when you’re in front, it’s insane,” said Drake about the effect of running outside the draft. “It feels like someone has put a vacuum on the back of your car. Luckily, I had my Lemons of Love teammate, Danny [Bender] helping me out the entire time. I stayed up front for almost all of the laps that mattered except for the last one.”

Gresham Wagner (No. 5 Sick Sideways Racing) was in the fight for the lead at the end, but ultimately finished fourth. Bryan Ortiz (No. 4 Copeland Motorsports) completed the top five.

In the ND1 category, Dean continued his win streak. The driver of the No. 16 Sick Sideways Racing entry won from pole, his sixth-straight ND1 win.

“I’m glad to be back up here,” said Dean, who swept the 2018 Road America weekend with two wins. “Hopefully tomorrow we are able to do the same thing. Sparky [Nathaniel Sparks] was able to catch all the way up to me. I was watching in the mirrors getting nervous! I don’t know what it is about this place. I love it.”

Second in ND1 went to Sparks, who had transmission trouble in qualifying and had to start from the back of the pack. His 15-position charge through the field won him the Idemitsu Hard Charger Award.

“The transmission held up and ran well,” Sparks said. “I was glad that I was able to get some help and get out there to represent my team, Sick Sideways. It was great to be there in the end and put on a good show for [team owner] John Dean. I was lucky to have made it through the pack. There was a lot of two-wheels-off passes down the straightaways. We brought it home and I’m glad we were able to have such a strong race and I’m really fortunate to have made it out there.”

There is one more race in the Alana Long 100 weekend at Road America. Saturday’s green flag drops at 4:30pm CT. The race will be streamed live on www.MazdaMotorsports.com.