Sebring, Fl (10 November 2018) –  After traveling over the ocean and across the continent to race in Sebring, 2018 Mazda MX-5 Cup Japan Champion Yuui Tsutsumi (Tby2 Cabana Racing) went the extra mile on Saturday with a final corner, last-lap pass to take the win in Race #1 of the 2018 Mazda MX-5 Cup Challenge.

The Challenge, the final, non-points event of the 2018 Idemitsu MX-5 Cup presented by BFGoodrich® Tires season, is a two-race shoot-out for a $50,000 cash prize from Mazda going to the driver with the best combined results from the two races, with $20,000 on the line for runner up and $10,000 for third. 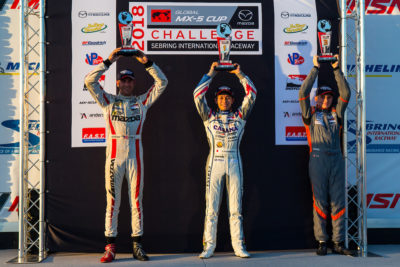 Sick Sideways driver and Sebring resident John Dean II started from pole and was scored as the leader on every lap as the field took the white flag.

But Tsutsumi entered Turn 17 in range of Dean, and committed to the inside line as Dean left him racing room on the notoriously bumpy corner. There was just enough space for the two as Tsutsumi emerged from under the bridge out front to claim a .522-seconds victory in his first time racing at Sebring International Raceway.

“The last five minutes of the race, I was thinking about making the pass at the end of the backstraight, but I couldn’t get close enough,” said Tsutsumi. “But on the last lap I found the spot in turn seventeen and tried it. It was a very hard race, everyone was competing against each other very hard the whole race.”

“I’m a little bummed, I thought we had it (the win),” lamented Dean II. “Going into the last corner we ran defensively, and I didn’t think he was going to shove it in there and he did. I feel like I was moving it out of the way to avoid a contact which I think would have happened if I didn’t move over. But it’s okay, I finished second, and we’ll go win it tomorrow.”

The 45-minute race ran without caution for the entire race distance, with the hard scrabble racing that the series is known for generating battles all through the pack as the intensity grew with each lap leading up to the checker. Third place finisher Robert Noaker (Sick Sideways Racing) had to maintain his patience early on to put himself in position for a podium at the checkered flag. 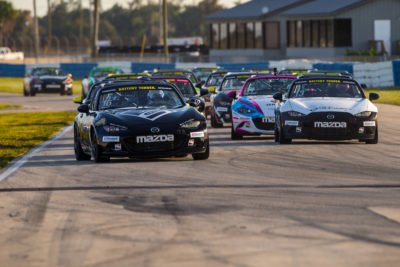 “At the beginning it was a little bit racy, so I was just taking my time and didn’t want to tear up the car in the first race,” said the Mid-Ohio round winner. “I was just hanging out in the back and just started making my way up through the field. The car wasn’t handling as good as we wanted it to, but I was able to drive it, and the draft really does play a big role with how long the back straight was, and I was able to make my way back up to third.”

Tyler Gonzalez, a 14-year old racer making his Mazda MX-5 Cup debut with Copeland Motorsports, impressed with his forward progress from 15th on the grid to 7th at the finish.  Tsutsumi wasn’t the only driver to have a big final lap, as Andy Lally claimed the fastest lap of the race with his final lap flier 2:29.3984 seconds in the No. 77 ATL Speedwerks entry.

The second race of the weekend will go green at 9:50 AM ET. The race will be streamed on Mazda’s YouTube page, and live timing and scoring will be posted at https://mx-5cup.com/results/live-timing.