Different paths through the season but just one point separate top twoMonticello, New York- When the Idemitsu Mazda MX-5 Cup presented by BFGoodrich stages its season-finale event at the Monticello Motor Club next weekend, there will be six drivers with a mathematical shot at taking the title.  The weekend, which will be staged as part of the Art in Motion Fall Festival, will feature a double header Saturday to settle the championship.

Winning the Mazda MX-5 Cup championship isn’t just about gaining a big resume boost and a fresh new trophy, as there is an incredible $200,000 in scholarship support from Mazda that will go to the 2018 champion.

Nikko Reger (195 points) currently holds a one-point advantage over 2018 Mazda Shootout winner Selin Rollan (194pts ), with Bryan Ortiz (176 pts) third ahead of Robert Stout (172 pts), 2016 Champion Nathanial Sparks (169 pts) in fifth, and Portland race winner Luke Oxner (157pts) in sixth as any of these names could end up on that big check at the end of the weekend.

The racing in Mazda MX-5 Cup has become well-known for being tough, tight, and thrilling for drivers and fans alike as the low-cost package puts the racing in the driver’s hands. The total margin of victory in 2017 was less than four seconds—for the full 12 race season.

That kind of close competition has been reflected in the championship once again this year.

The first race of the season at the Circuit of the Americas generated a fair predictor of how the season would look, with Ortiz scoring victory ahead of Reger and Rollan in his rookie outing.  The Barber Motorsports Park weekend saw Reger post a break-out performance, capturing both wins on the weekend as Rollan fought through 4th and 8th place finishes while Ortiz added to his podium tally with a second place result in race one.

Reger and Rollan shared the podium at Road America in race one, taking second and third respectively while Ortiz finished 9th.

In race two, Ortiz drove to sixth with Reger just behind in seventh. The Wisconsin weekend was a gut-punch for Rollan as he suffered a mechanical DNF in the second race and was forced to watch from the sidelines.

“I hate being a spectator, but I will admit that it is some incredible racing to watch,” said Rollan to the Mazda Livestream broadcast team.

Rounds 7 & 8 at Mid-Ohio saw Ortiz suffer in race one with contact on lap one that took him out of the race, but he came charging back in race two to score his second victory of the year. The championship continued to tighten at Mid-Ohio as Reger took eighth in race one but a season-worst 23rd in race two. Rollan matched his eighth place finish in race two after carding fifth in the weekend opener.

That set the stage for the series’ first visit to Portland International Raceway with the all new Mazda MX-5 Cup machine as the field took to a track that was new to all of them.

In an event weekend that featured everything from turn one chaos to long green flag runs, Reger maintained his advantage with double-fourth place results, but Rollan narrowed the gap with a runner-up result in race one and then a big victory in the second race of the weekend. 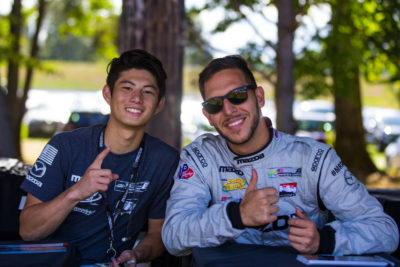 “I think the race for the championship will come down to me and Nikko (Reger), and possibly Bryan (Ortiz) as well,” said Rollan. “I’ve been in championship battles before and the biggest thing is to just be smart about who you are racing, and  make sure to keep that as your focus. It is a little bit like the NASCAR finale at Homestead, there is kind of a race within the race and as long as I can stay in front of Reger I know it will work out. It is incredibly exciting to be in this position and I just can’t wait to get going.”

Having held the point for most of the season, Reger is well accustomed to having the target on his back, but he’s kept his focus on what he needs to do as he juggles the demands of race prep with a big workload in his university studies.

“I’ve got a finance exam that I’m taking and then one more calculus exam the day before I leave for the race weekend,” said Reger. “It’s really challenging to balance what I need to do for school and working on being ready for Monticello, but it just means a little less sleep and some longer days, so it is all good. Having another track that everyone has to learn will make for an interesting weekend, and with so many corners it will be a lot less straightforward than Portland so I’m looking forward to learning it and hopefully it suits my driving style and we can have a big weekend.

Having opened the year with the COTA victory, Ortiz’s season has seen by far the most ups and downs of the championship contenders. That Includes his big comeback event at Mid-Ohio, as well as a storming drive through the field at Portland, where he started from last in the field after a transponder issue kept him from posting a time in qualifying. But even without a yellow flag to bunch the field, he raced all the way from 25th to 3rd to claim his fifth podium of the year.

“There is a bit of a gap from me to Selin (Rollan) and Nikko (Reger), so there is some room to catch up but I’m not letting that change how we go into the weekend at Monticello,” said Ortiz. “It is racing and anything can happen so there is no giving up until the last lap is done. I just want to learn the track quickly and hopefully have a big day. My team (Copeland Motorsports) has done a great job this year and we’ve had great support from Bella Racing and Mazda of Puerto Rico.  When we’ve had some bad luck, we have just turned the page and came back fighting harder.”

The season-ending event at Monticello Motor Club will open with practice on Friday, September 28, with the final two races of the regular championship season set for Saturday, October 29.