IRVINE, Calif. (August 2, 2018) – It’s been a long road to get back behind the wheel of a race car for Staff Sgt. (Ret.) Liam Dwyer, but next weekend he will return to competition in a 24-hour ChampCar race at VIRginia International Raceway behind the wheel of a Global Mazda MX-5 Cup race car.

Dwyer, a multi-time race winner with Mazda in IMSA’s Continental Tire Sports Car Challenge, has not competed since the final IMSA Continental Tire Sports Car Challenge race of the 2017. After the season, Dwyer, who suffered life-threatening injuries including the loss of most of his left leg during a military tour in Afghanistan in 2011, elected to undergo a procedure called osseointegration in which a titanium rod has been inserted into his left femur to allow direct attachment and removal of his prosthesis.

With multiple surgeries and physical therapy keeping him out of the car since last October, Dwyer is anxious to race again. 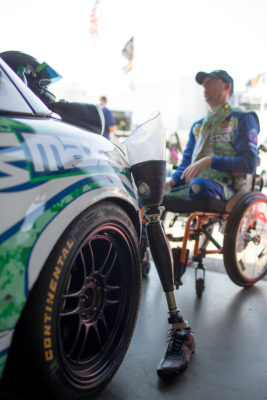 “I’m very excited to get back behind the wheel of a Mazda race car,” said Dwyer. “In my first race back, I get to drive the Global MX-5 Cup car with former teammates and friends, but more importantly, I get to do it with fellow service members working on the car. We are partnering with Operation Motorsport, a charity founded to engage wounded, ill and injured Service Members through motorsports opportunities to aid their recovery and rehab. Thanks to Mazda, all of us can work together at VIR with the same goal – to use motorsports to aid us in our recovery and rehab.”

“Everyone at Mazda remains in awe of the Challenger Spirit that Liam demonstrates each day,” said John Doonan, Director, Mazda Motorsports. “We are thrilled to begin another part of his journey and see him back behind the wheel at VIR.”