LEXINGTON, Ohio (July 30, 2018) – Kyle Kirkwood secured the Cooper Tires USF2000 Championship Powered by Mazda title after winning Round 10 of the season on Friday afternoon. Thanks to winning the championship, the 19-year-old from Jupiter, Florida will be moving up to the Pro Mazda Championship Presented by Cooper Tire with a $390,000 scholarship from Mazda.

Not only has the rookie won a record nine races this season, including his seventh in a row on Friday, but was able to clinch the title with five races to spare. With 10 victories in 12 races, Kirkwood has set a new record for wins per start on the Mazda Road to Indy Presented by Cooper Tires.

“It’s [winning the 2018 championship] is completely unexpected,” said the 2019 Mazda Scholarship Driver. “When I came into the championship this year, I had no expectations and wasn’t sure what was going to happen. I only did one test weekend going into the year so right now this means to me what the team can do and what I can do as a driver… I’m still trying to absorb all of it really.”

With over $2 million dollars in Mazda driver development scholarships, the support allows the championship winning drivers from all three rungs on the Mazda Road to Indy to climb to the next step on INDYCAR’s official ladder system. For most drivers, the scholarship plays a pivotal role in the future of their racing career.

“When Kyle came to the USF2000 Shootout a couple of years ago, he narrowly lost to Oliver Askew,” stated Kyle Kimball, Mazda Motorsports Operations Manager. “We knew at that point in time that Kyle Kirkwood is going to be a star and he was going to shine on the Mazda Road to Indy.”

“The Mazda Road to Indy is not only about training inside the car, but also outside the car,” said Kimball. “We tell the young men and women that their behavior and attitude and the way they conduct themselves outside of the car is more important than what they do inside the car and on the track.”

“We saw his shining personality in 2016 [at the shootout] and to look forward to 2019 and know that Kyle Kirkwood will be representing the Mazda brand puts us very much at ease.”

On top of his incredible performances are his consistency; in the two races where he didn’t stand on the top step of the podium, he finished fifth and second. His average start of 2.2 and his average finish is 1.4. That is one of the best qualifying and finishing position average in Mazda Road to Indy champion history.

“There’s so many amazing drivers, especially veterans, and the car is amazing,” said Kirkwood. “Cooper Tires and Mazda engines – it’s a great package. It’s the best in the country, no doubt. It’s good to come into the season and win the first race right off the bat. From there, our momentum just kept growing and growing.”

If Kirkwood’s winning streak were to continue for the rest of the season, he would tie JR Hildebrand for second-place on the all-time wins list and accomplish the feat in only 14 races. He would also set a record with the highest overall win percentage, 85%.

Patricio O’Ward regained the championship points lead coming into the weekend after standout performances at the doubleheader weekend in Toronto. His momentum continued, claiming pole position for both Indy Lights races at Mid-Ohio. In Race 1, O’Ward lead from flag to flag to claim his sixth win of the season. In Race 2, O’Ward would lead from the start but would have to defend against Colton Herta for the majority of the race who passed Telitz at the start of the 30-lap contest. After just one full-course-caution, the field restarted on Lap 12. Herta would use all of his push to passes in an effort to catch O’Ward, but O’Ward was able to pull away to his third win in a row and grow his championship lead to 32 points over Herta.

17-year-old rookie Rinus VeeKay’s Race 1 pole position played a pivotal role in the championship battle, as the Dutch driver would win the 25-lap race from start to finish over David Malukas and teammate Robert Megennis, taking a 15-point advantage going into the second race of the weekend. As Race 2 began, polesitter Malukas had a large lead over VeeKay before suffering a mechanical issue seven laps into the race, giving the points leader the lead of the race. Parker Thompson, running second in the championship would fight back from as low as ninth to finish sixth as VeeKay would lead Megennis and Mazda scholarship driver Oliver Askew to the checkered flag. This becomes VeeKay’s fourth win in a row and his sixth of the season. He leads Thompson by 31 points as the championship heads to Gateway Motorsports Park, August 24-25.

Kirkwood’s dominate season continued Friday afternoon as the rookie claimed the pole position and victory in the first race of the weekend, sealing the 2018 series championship in front of the Mid-Ohio crowd. Even after winning the championship on Friday, the 19-year-old didn’t let up, taking the lead in Race 2 as pole sitter Kaylen Frederick went off course at turn 2. Kirkwood went on to win the second race with Lucas Kohl and Igor Fraga finishing second and third, respectively. The third and final race of the weekend from Mid-Ohio once again saw Kirkwood winning and sweeping the weekend for Cape Motorsports, but it didn’t come without a good battle. Kirkwood passed James Raven at the start of the 20-lap race and Rasmus Lindh would fight his way onto the final spot of the podium, joining Raven, who finished second, and Kirkwood. The final race weekend of the championship will be contested at Portland International Raceway, August 31 – September 2. 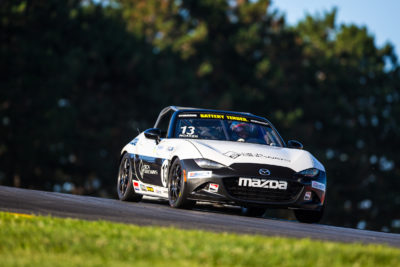 Fourteen-year-old Robert Noaker stormed from 15th starting position in the field to win the first MX-5 Cup race of the weekend. In a thrilling last-lap battle with Masters driver Hernan Palermo, Noaker led at the white flag, lost the lead, and then took it back with two corners to go. On Sunday, Bryan Ortiz battled back from a DNF on Saturday after an incident to take the victory on another last-lap pass, finishing just ahead of Nathaniel Sparks and Joey Bickers. Nikko Reger remains the championship leader, but Robert Stout, who finished third and fourth on the weekend, moved into second place in the standings with Ortiz now in third. Mazda Scholarship driver Selin Rollan continues to lead the rookie standings.