IRVINE, Calif. (May 30, 2018) – Mazda Team Joest hit a significant milestone at the last IMSA WeatherTech SportsCar Championship round at Mid-Ohio, when the No. 77 Castrol / ModSpace Mazda RT24-P driven by Oliver Jarvis and Tristan Nunez finished on the podium for the first time since the rebooted program hit the track this season.

Now, with that target behind them, Mazda Team Joest is targeting a better result this weekend as IMSA competes on the temporary 2.3-mile Raceway at Belle Isle in Detroit, Michigan. Last season at Belle Isle, one of the team’s Mazda RT24-Ps finished in third place, further demonstrating the Mazda’s strength on street circuits. The team had also finished on the podium at the street circuit at Long Beach earlier in the season.

At Long Beach earlier this season, Harry Tincknell put the No. 55 Mazda RT24-P that he shares with Jonathan Bomarito in third position in qualifying. For Tincknell, as well as Jarvis, they will make their debut at the Raceway at Belle Isle. Nunez has won at Detroit before, in 2013 in a GX-class Mazda6. 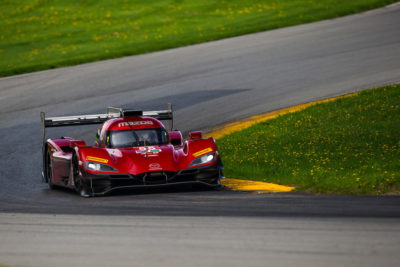 As with any street circuit, limited opportunities for passing and a tight layout at Belle Isle put an emphasis on qualifying performance and track position. This is highlighted as well with the shorter than normal race length of 100 minutes. Detroit will also see only two of the three IMSA classes competing, reducing the amount of lapped traffic the Prototype class Mazda RT24-Ps will encounter.

The IMSA Sports Car Challenge from Mid-Ohio will be broadcast live on FOX Sports 2 on Sunday, May 6 at 1:00 PM ET.

John Doonan, Director, Mazda Motorsports
“Coming off of the Mid-Ohio podium, we felt another step had been made in our program’s progress. And while podiums are great, as we said, nobody is fully satisfied yet. Consistently being on the podium will be another statement for sure, but the elusive first victory – and several more after that one – is the primary focus on everyone’s mind. The drivers continue to train on the simulator leading up to events, the staff at Multimatic continues to work hard to refine the package, our partners at AER continue to focus on the details in the engine bay, and Mazda Team Joest is bringing solidly prepared race cars to the track. It has taken everyone to get to this point and it will continue to take everyone’s massive efforts to achieve what we set out to do. We plan to leave our visit to ‘Motor City’ with a big trophy.”

No. 55 Mazda RT24-P
Jonathan Bomarito
“Detroit is another 100-minute race and it definitely brings added pressure to qualify well. It will be the first time this year without the GTLM cars so traffic will be a little lighter, which is good on street courses. We have had fast race cars in the last couple of races and coming off a podium for the No. 77 car we have good momentum – so hopefully we can build off of that!”

Harry Tincknell
“I’m really looking forward to my first Detroit Grand Prix this weekend. As with every circuit this season apart from Daytona, it’s a new one from me and I can’t wait to get started. It is high speed and pretty wide for a street circuit and I think that should suit the RT24-P. We had a good showing at our last street track at Long Beach where I qualified third and ran at the front throughout the race. This track looks a little bumpier, but the higher speeds should hopefully see us be even more competitive. I can’t wait to get back in the Mazda after missing Mid-Ohio but it was fantastic to see the progress of the team continue with our first podium of the season and I am sure we can build on that again at Detroit.”

No. 77 Castrol/ModSpace Mazda RT24-P
Tristan Nunez
“In years past, the Detroit Grand Prix has been a battle from start to finish. With the improvements and pace we have shown thus far, I have no doubt we will have a competitive car this week. Belle Isle is a tricky track because although there is very little room for error, we have to be on the edge to be quick. I’m very excited to see how this weekend goes for all of us at Mazda Team Joest!”

Oliver Jarvis
“After a podium last time out at Mid-Ohio, expectations heading to Belle Isle are extremely high. It was great to get Mazda Team Joest’s first podium, but now it’s the win that we are focused on achieving. With the Mazda RT24-P having been strong at the previous street circuit in Long Beach I see no reason why we shouldn’t be capable of fighting at the front in Detroit. It will once again be a new track for myself, but I’ve done as much preparation as possible before arriving so I’m just looking forward to getting my first laps in under my belt.”