Irvine, Calif. (May 29, 2018) – As the USF2000 and Pro Mazda Championships made their return to Lucas Oil Raceway for the Carb Night Classic, up in the grandstands a familiar face was watching the action from above with a serious interest on the outcome of the race. Wisconsin’s Aaron Telitz won the Freedom 75 USF2000 race at the same track in 2014 and wanted to cheer on the up-and-coming Mazda Road to Indy drivers and teams as they took to the 0.6-mile short oval.

“If I had told myself four years ago that by this time, I would have competed in two Freedom 100 races at the Indianapolis Motor Speedway, I don’t know that I would have believed it,” said Telitz. “The thought of moving up and winning another Mazda scholarship just seemed so far fetched, I felt lucky to just be able to race in USF2000 at the time. It’s incredible to think I’ve now made it to Indy Lights and working towards the Verizon IndyCar Series for next year.”

More Mazda Scholarships were to come for the likeable Telitz, who competed in USF2000 in 2014 thanks to the Mazda Road to Indy program. After a near miss in the USF2000 championship in both 2014 and 2015, Telitz put it all together in 2016 to win the Pro Mazda Championship and with it, a scholarship to move up to Indy Lights for 2017. Telitz’s success has attracted a number of longtime supporters, including Morrie’s Automotive Group, a leading Mazda dealer in Minnesota.

Telitz wasted little time, winning his Indy Lights race debut at St. Petersburg, and following that up with a second in the Freedom 100 before concluded the 2017 season with another win at Watkins Glen International.

What might bring an Indy Lights race winner to Lucas Oil Raceway just hours after completing his second Freedom 100 at the famed Indianapolis Motor Speedway?

“I just love coming out to Lucas Oil Raceway. I like to help out Arms Up Motorsports; they helped me out so much in my USF2000 rookie year so I like to give back to t 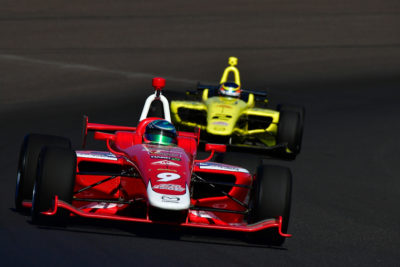 hem as much as I possibly can. To come out here and help out is really rewarding and to see them succeed at a track that gave me my first USF2000 win means a lot.”

The 2018 race season has so far been a trying one for Telitz. After scoring pole position for the season opener in St. Petersburg, Fla., an incident in qualifying for the second race prevented him from taking the start of round one. Then, opening-lap incidents in round two as well as round three at Barber Motorsports Park kept him from completing a single racing lap until the fourth round at Barber. Since then, he’s scored two podium finishes and just came off a sixth-place finish at the Freedom 100.

“I think I have more appreciation for racing now,” said Telitz. “Back then I was just kind of happy to be there and had no idea where I was going to go. Now to see where my career has gone and the effect the Mazda Road to Indy program has had, it makes me appreciate that I’ve gone from essentially nothing to racing Indy Lights at the Brickyard.”

Everyone that has had the pleasure of meeting Telitz will know that only a few drivers display more positivity and outright passion for the sport of racing than the Indy Lights sophomore.

“I’ve always enjoyed the moment I’m in when racing,” said Telitz. “I’ve never been a driver that’s constantly beating myself up or just focused on making it to IndyCar. I’ve always just had fun doing it and that’s exactly what I did when I won here in 2014. I would do it the same way over and over again.

Next up for Telitz and indeed the entire Mazda Road to Indy program is a return to Wisconsin and the famed Road America circuit on June 22-24. When asked what he could do to make the most of the remainder of the 2018 season, the charismatic racer simply responded: “I can win races. Winning races always catches people’s eyes.”

Canadian Dalton Kellett scored his first career pole position in what was to become one of the most entertaining Freedom 100’s at the Indianapolis Motor Speedway in recent history. The 100-mile race saw 20 passes for the lead, over 100 overtakes for position and at the line the top-five were separated by a mere three tenths of a second. Colton Herta snagged the win, his third in a row, ahead of Freedom 100 debutant Pato O’Ward and Dalton Kellett.

Canadian Parker Thompson picked up where he left off at the Indianapolis Motor Speedway two weeks ago by leading the Freedom 90 from flag to flag. Brazilian Carlos Cunha challenged Thompson at several points during the race when lapping traffic, but eventually had to settle for second across the line. Robert Megennis matched his season-best result by finishing third.

On his oval debut, Kyle Kirkwood scored the pole position at Lucas Oil Raceway for the Freedom 75. Despite two full course cautions, the talented Floridian was never seriously challenged and dominated the 30-minute race. Championship contender Alex Baron was out of the race early, thus giving Kirkwood an even more commanding lead in the USF2000 points standings.