Reger wins again in Barber, Lamb captures Masters and Belluardo captures Challenger Cup
Birmingham, Ala.  (April 21, 2018) – Clearly relishing the view from atop the podium at Barber Motorsports Park, Nikko Reger (No. 01 Slipstream Performance) raced his way to victory for the second time in as many days to sweep the Idemitsu Mazda MX-5 Cup presented by BFGoodrich® Tires weekend.
With just one caution period early in the running, Saturday morning’s race was another great display of Mazda MX-5 Cup racing. Over 240 passes for position were recorded as the top four finishers crossed the line within one second of each other as Todd Lamb scored second and Nathanial “Sparky” Sparks took third.
Friday’s third place finisher Joey Bickers  (No. 34 McCumbee McAleer Racing) led the race from the start, but lost the lead when he spun and caught out a pursuing Bryan Ortiz (No. 4 Copeland Motorsports). The two made contact and had their days end early.
2015 Mazda MX-5 Cup champion John Dean II took the lead and held the point for 13 laps. The lead pack was rich with talent, as 2009 Mazda MX-5 Cup champion Todd Lamb as well as 2016 Mazda MX-5 Cup champion Nathanial Sparks fought for the lead and Mazda Scholarship racer Selin Rollan gave chase in pursuit of his return to the podium. 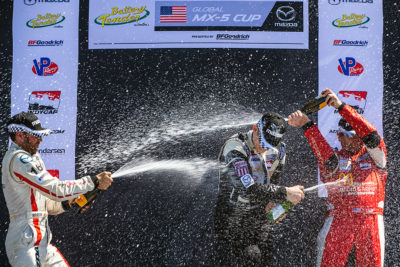 But it was young Reger, who had qualified in 11th position, who took the lead on lap 23 and didn’t look back, crossing the finish line 0.4403- seconds clear of the field.
“These guys are incredible drivers,” said Reger, who is looking forward to his upcoming 20th birthday.  “I was up there with John Dean, Sparky and Todd Lamb—these guys are champions—but I knew if I kept my head down and didn’t get too cocky over my win yesterday I could get the win today.”
Charging from 11th on the grid to score the victory, the young Texan had a big assignment for the 45-minute race but used equal parts pace and patience to score his fifth career victory – which came only one day after his fourth as he had captured Friday’s MX-5 Cup race at Barber.
The effort not only yielded the big trophy, but his forward progression also saw him earn the Idemitsu Hard Charger Award, given to the driver who advances the most positions in the race. Reger also captured the first MX-5 Cup race of the weekend, on Friday afternoon.
“The main thing I learned about this beautiful Barber track at spring training was patience,” he said. “It takes a lot of patience to get around this track. That contributed to the win today because I qualified 11th and I had a lot of places to make up, so it was all about patience. I was a little concerned that we didn’t have the consistency that others had, but I felt fast. I had good control and I felt very comfortable here. It was that comfort that made me believe we had a chance to get on the podium.”
After getting knocked out of Friday’s race following contact,  Lamb was much happier with how things went on Saturday as he also claimed the Masters category win.
“It was a good day for Atlanta Speedwerks,” said Lamb. “My teammate, Brian Henderson, was 11th. I’m much happier with the result today than yesterday! For the most part everyone up front was running clean. You can tell the caliber of drivers up front with everyone running clean and giving each other room and a lot of heads up driving, race craft and strategy.”

Charlie Belluardo (No. 73 Flatout Motorsports) emerged ahead of Alex Wolenski (No. 56 McCumbee McAleer Racing) and Nigel Faulkner (No. 82 McCumbee McAleer Racing) to net his fourth Challenger Cup presented by Monticello Motor Club win.
“Mazda makes an awesome car and the BFGoodrich tires are unbelievable,” said Belluardo. “I tortured them today and I was running the same lap times in the end that I was in the beginning. I have to thank Idemitsu for their support of the series and of course Monticello Motor Club and Flatout Motorsports.”
The final award of the weekend was the VP Racing Fuels Clean Image Award, which went to Copeland Motorsports for the team’s presentation and paddock presence. The squad had two entries for the Barber weekend with Ortiz and Racer Kashima (No. 7 Copeland Motorsports). During the 2018 season, one team each weekend will earn the distinction from VP Racing Fuels, with Flatout Motorsports having claimed the honor at the Circuit of the Americas and the $500 that goes along with it.
The series will return to race action in June with the annual visit to Road America as part of the Verizon IndyCar Series event. It should be another competitive event. In 2017, 0.0731-seconds was the total combined margin of victory for the two Mazda MX-5 Cup races at Road America.
Updates will be available via https://twitter.com/GlobalMX5Cup, with results to be posted with news and updated photos at https://mx-5cup.com. Both races from Barber Motorsports Park are available on Mazda’s YouTube page (youtube.com/mazdausa).