The Mazda RT24-Ps demonstrated a major leap forward in competitiveness at Daytona International Speedway, but unfortunately both cars retired before the finish of the Rolex 24 at Daytona, the first round of the 2018 IMSA WeatherTech SportsCar Championship.

The heavily revised Mazda RT24-P’s showed increased speed throughout the week at Daytona. Rene Rast led the first practice in the No. 77 Castrol/ModSpace Mazda RT24-P that he shared with Tristan Nunez and Oliver Jarvis, while Jonathan Bomarito qualified in ninth position in the Prototype class in the No. 55 Mazda RT24-P that he shared with Harry Tincknell and Spencer Pigot. Underlining the progress made by Mazda Team Joest, Bomarito’s qualifying time was 3.3-seconds faster than the best qualifying time of the RT24-P in 2017.

“If you roll the clock back, qualifying last year at a 1:39.9 and this year at a 1:36.6 – it’s monumental,” said John Doonan, Director of Motorsports for Mazda North American Operations. “And kicking off the week by being quickest in the first practice was a huge uplift to the guys. It was only practice, but we made a statement – we are here, we are serious – it was a big deal. And we entered the race knowing that we could run with the other Prototypes, so those were all positive. Clearly, there were some challenges, but I want to walk out of here and take all the positives, and the things that were challenging, and take that momentum to solve the problems so we can show up at Sebring and be more competitive.” 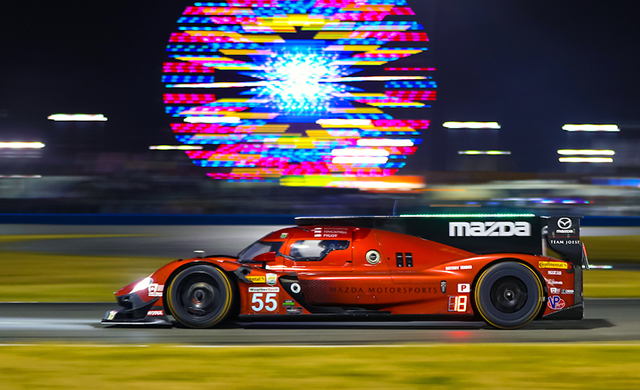 Both Mazda Team Joest cars moved forward into the top 10 of the field by the race’s second hour, but then a variety of issues, including multiple tire punctures and electrical issues, slowed their progress. The crew responded by resolving every issue, and the drivers responded by running a competitive race pace through the day and into the night – and through a brief rainstorm that fell in the race’s sixth hour.

“There were definitely some highlights for us at the Rolex 24 at Daytona,” said Bomarito. “Our pace was very competitive in the wet and the dry. In the wet, I was able to go through the field and pass the overall leader, which is very promising for our car. We get to take many things that we learned from this race, good and bad, to further the program for the future. This was the first race for Mazda Team Joest, really our first endurance test, and they are so smart and thorough that a lot of these little issues will be fixed the next time that we come to the track.”

“It would be easy to dwell on the negatives instead of focus on the positives – and that is that we’ve got a quick race car,” noted Jarvis. “It was only a year ago that the cars were miles off the pace, and in a very short amount of time, the Mazda Team Joest guys have made a huge amount of progress. Having the troubles here in our first race means we are going to learn from them and it’s only going to make us stronger moving forward. And moving forward, we can go out and win races.”

The next opportunity for Mazda Team Joest will be the second round of the IMSA WeatherTech SportsCar Championship, the 12 Hours of Sebring on March 17.