– Keith Donegan and Selin Rollan Win $300,000 in Mazda Scholarships –
CHANDLER, Arizona (December 10, 2017) –  Keith Donegan of Dublin, Ireland and Selin Rollan of Orlando, Florida earned Mazda driver development scholarships this weekend at the Bondurant Racing School circuit in a pair of competitions among young, championship-winning racers. Donegan, 20, earned a $200,000 scholarship in the Mazda Road to Indy Shootout, where he topped champions from nine countries to compete in the 2018 Cooper Tires USF2000 Championship Powered by Mazda. In the Mazda Road to 24 Shootout, Rollan beat three other finalists to earn a $100,000 Mazda scholarship to race in the 2018 Idemitsu Mazda MX-5 Cup presented by BFGoodrich® Tires. The MX-5 Cup is the first rung of the Mazda Road to 24 program. The two scholarships are the latest in the program initiated by Mazda in 2006 to help championship-winning drivers compete in the highest levels of both sports car and open wheel racing. 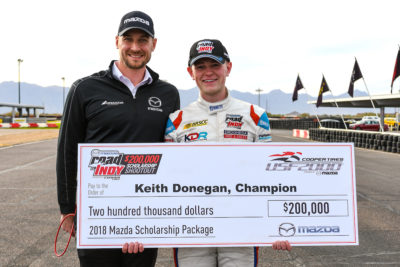 In the Mazda Road to Indy competition, 17 drivers began the weekend with a chance to win the $200,000 scholarship by driving Formula Mazda race cars provided by the Bondurant Racing School on the school’s challenging 1.6-mile track. After two days of on- and off-track assessment, the field was trimmed to five finalists from four continents to determine the overall winner. Based upon lap times and other criteria, Donegan was selected by the judging panel that included IndyCar analyst Scott Goodyear, Mazda racers Tom Long, Andrew Carbonell and Jonathan Bomarito, and current Mazda scholarship drivers Victor Franzoni and Oliver Askew.

“It really hasn’t hit me yet,” said Donegan, soon after he was selected. “The weekend was really good and I enjoyed it. I have to say a huge thanks to Mazda and Cooper Tires and everyone at the Mazda Road to Indy. I enjoyed every moment. Throughout the weekend we were consistent and I kept the small things in check. I didn’t make any stupid mistakes and kept my head cool and that really paid off in the end.”
Donegan, who was an at-large nomination for the competition after his performance in England’s Formula Ford Festival, had a large contingent of family and friends at the event to help him celebrate.
“You see all these champions here today that will go on to great things in the future and I’m sure the names you see here today aren’t going to disappear,” Donegan said. “They will be back up there and I’m sure I will be racing them again some day. It is an unbelievable opportunity to be given and for Mazda to provide that for any young driver. It just gives that bit of motivation that you need because the [U.S.] is where you need to go to become a professional these days. It is such a boost to my career.” 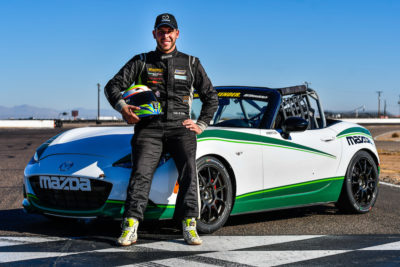 Rollan, who earned his ticket to the MRT24 Shootout as an at-large nominee from the SCCA and NASA Spec Miata categories, had an emotional reaction to winning the scholarship into the MX-5 Cup Series.
“It was a tough competition for sure,” Rollan said of the four-driver battle in matching MX-5 Cup cars. “That last session was intense. I cried a little bit on the phone with my dad. It was definitely emotional. My parents and my sister have been there with me since I was 11 years old when I began racing. I need to thank BSI Racing, Apex Alignment and Rosini Racing Products for helping me in Spec Miata to get this next chapter with Mazda. It will take a few weeks to sink in. Thank you Mazda.”
“One of the hardest jobs in all of racing is being a Mazda Shootout judge,” said John Doonan, director of Mazda Motorsports in North America, after it took nearly two hours for the judges to decide on a winner of the MRTI competition. “With so much raw talent from around the world, picking a winner is an enormous task. We expect Keith Donegan and Selin Rollan to shine brightly, not just in 2018, but for many years to come.”