– Mazda Prototype Team Striving For Third Consecutive Podium Finish –
IRVINE, Calif. (July 3, 2017) –  The Mazda Prototype team rolls into Canadian Tire Motorsport Park (CTMP) outside of Toronto this weekend for the Mobil 1 Sportscar Grand Prix. The team has recorded two consecutive podium finishes for the first time, and CTMP represents an opportunity to extend that to three straight. This is the seventh of the 10-race IMSA WeatherTech SportsCar Championship for the Prototype category. The two-hour, 40 minute race around the undulating 2.459-mile circuit can be seen live on FS1 at noon ET, with live coverage from IMSA Radio/ Radio Le Mans throughout the weekend.
The two-car Mazda team showed great pace Sunday at Watkins Glen International, which bodes well for the similarly fast and smooth Canadian track. The circuit is known for extreme elevation changes and high speeds, but it’s the cornering that provides the biggest physical challenge for the drivers.
“The thing that is most physically demanding is the length of the corners and the speed of the corners,” said Tristan Nunez, driver of the No. 55 Mazda Prototype. “You’re pulling such heavy G-loads around the track, and 70 percent of the track is at full throttle, so that gives you an idea of how fast the corners really are at CTMP.  It takes a toll on the driver. Every year I’ve been there, I walk away feeling pretty sore. I’ve been training ahead of time, but nothing compares to the forces you take when you’re in the car.”
Sore or not, Nunez relishes racing at CTMP.
“It’s definitely one of my favorite tracks,” Nunez said. “It’s a gutsy track and I really like the high speeds. Plus, our car does very well in the high-speed sections. The track is pretty smooth, so we can run the car very low [for more downforce], so I’m pretty excited for it.”
Last year, Nunez won the pole and led 20 laps (by a margin reaching upwards of 16 seconds) at CTMP, but with the new-for-2017 Daytona Prototype international cars, there is uncertainty about what to expect when the Mazda RT24-P cars hit the track for practice on Friday.
“There’s not any connection to last year besides the fact that you have the experience going into it,” Nunez said about leading the race last year. “It’s muscle-memory and knowing the track. But every track we’ve been to this year, it’s a big question mark and you don’t know what your car is going to do until the first or second practice. We’re going to go in there and try to get a good baseline set-up to start the weekend and see where we end up. With the rule changes this year, it’s tough because you don’t know where the other guys are going to be. With the old cars, you had an idea. Now, everyone is on a LMP2-style package, so it leads to uncertainty about how every team will perform.” 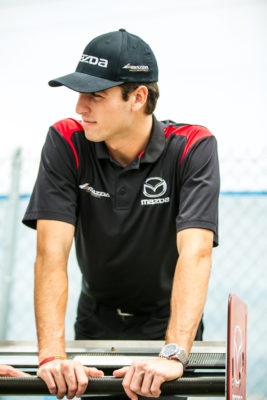