– Pigot and Franchitti Join the Mazda Prototype Team This Weekend –

IRVINE, Calif. (June 26, 2017) – Coming off a podium finish at the Grand Prix of Detroit, the Mazda Prototype team carries confidence into the Sahlen’s Six Hours of the Glen at the iconic Watkins Glen International circuit this weekend. With the six-hour race duration, Mazda has added additional drivers to the lineup. Spencer Pigot will join Tristan Nunez and Jonathan Bomarito in the Soul Red No. 55 Mazda Prototype, and Marino Franchitti will share the Machine Gray No. 70 Castrol Edge Mazda with Joel Miller and Tom Long. Long and Miller finished third at Detroit, which marked their best-ever Prototype finish in the IMSA WeatherTech SportsCar Championship. The race takes the green flag at 10:10 am Sunday morning and can be seen live on FS1 (10 am – 1 pm ET) then switching to FS2 (1:00 – 4:30 pm ET). It can also be heard live on IMSA Radio/Radio Le Mans and SiriusXM radio, channel 214. 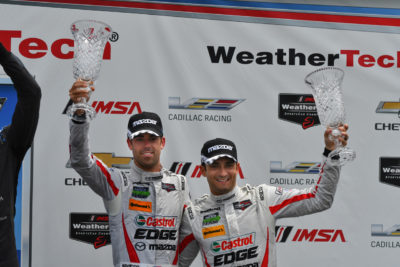 “Detroit was fantastic,” said Miller. “The team capitalized on a really good opportunity. They put us in a position to finish well, and it was fantastic to have the No. 70 car and team on the podium. The momentum going into Watkins Glen is good. But, we still need to be realistic about where we are with the program on a natural terrain road course. We have developed the car since Texas [at Circuit of the Americas in May], so I’m looking forward to those developments. We’re in the mind-set of a six-hour race, with the three drivers and multiple pit stops. For us, it’s most important to do our jobs just like we did at Detroit. When it gets to the last hour, we’ll go after it.”

The Watkins Glen circuit dates back to 1948, and has a long, storied history in sports car racing, plus an array of categories from Formula 1 and Can-Am to IndyCar and NASCAR.

“It’s been 15 years since I last raced at the Glen,” said Franchitti. “I loved it then, and having talked to my teammates about the new surface, it’s even better now. The first time I raced there, I was taken around the original track and was completely blown away by the scale and challenge of it.  That inspired me to hunt for pictures and videos of Jim Clark winning at the track in the 1960’s, Jackie Stewart in the ‘70s and Can-Am races. It’s such a legendary, special place to race and I can’t wait to get back in the Mazda RT24-P with Joel and Tom. They are coming off a fantastic result at Detroit and I hope we can carry that momentum into this weekend.”

“I grew up watching the Six Hours on TV,” Pigot said. “It looked awesome on TV, but it’s even cooler in the race car!”

Mazda Prototype driver Tristan Nunez will be unleashed with a takeover of the official IMSA Snapchat account (Add “IMSA” as a friend) on Thursday and Friday. We suspect some fun and hi-jinks will occur.

Mazda MX-5s will do battle Saturday afternoon in the two-hour Continental Tire 120 at the Glen in the Continental Tire SportsCar Challenge series. The three-car Freedom Autosport team will see the addition of Matt Fassnacht of Madison, NJ as teammate to Britt Casey Jr. in the Trumpf-backed No. 27 Mazda. Fassnacht has an extensive background racing Mazdas, including the TCA category in the 2017 Pirelli World Challenge series. The Freedom team will also have the No. 25 ModSpace Mazda with co-drivers Chad McCumbee and Stevan McAleer, who won the rain-drenched Continental race at the Glen in 2015, and the No. 26 Semper Fi Fund Mazda with drivers Liam Dwyer and Andrew Carbonell.