There are many spec series and classes for spec cars, but some are more equal than others. For those wanting absolute parity, where the driver is the main variable, a car built by a factory and delivered ready to race is as equal as it gets. That’s why Long Road Racing has such a rigorous process for building the MX-5 Cup car.

“We start at the beginning with not accepting anything other than brand-new cars delivered directly from Mazda,” explains Glenn Long. “We cannot accept somebody who bought a street car and we do not the pedigree or the history. So we start with brand new cars, and every one is identical from the factory.”

The disassembly process is as rigorous as the procedure for putting the cars back together with the racing parts. Each car is assigned a number, and that number is marked on all the parts that come off the car so that they go back onto the same car. Long Road buys the roll cages in batches of 25, from a third-party company that cuts and bends all the bars, as well as fishmouths the ends – Long Road has to do no grinding or cutting. “We can verify that each cage not only weighs exactly the same, but fits to the car exactly the same. That’s probably one of the more important functions for us, so there are no variables in rigidity of the cars,” Long says. 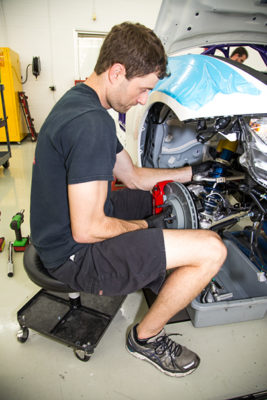 Long Road also builds it’s own swaybars, because they couldn’t get a guarantee that all the bars from another manufacturer would be the same. They test them to ensure the twist rate is the same, and they also test the springs and the Dynamic dampers as the suspension components are assembled to make sure they are all to spec. The wheels and tires are particular to the MX-5 Cup car, further eliminating variables.

“We also do things like mandate the fluids in the car. The reason we do that – and it is one of the things we get the most questions about – is twofold. One, so it continues to be the best value in motorsports, teams don’t have to go out and dyno Red Line or NEO or Mobil 1 or whatever the oil of the day may be. We spec Castrol Oil, which is a high temperature, high quality oil, and everybody’s running the same oil. It’s that attention to detail that we attempt to put into every car build, that every component on the car is the same,” he says.

After the car is inspected and all the parts and torque values are checked, they then put the car on the dyno. “We have a very narrow window that we accept for horsepower and torque,” Long explains. “We also break in the motors at that time, as well as the rest of the driveline. That’s how we ensure the quality as well as consistency from birth to transporter.”

In the near future, we’ll discuss what happens at the track to make sure that the cars delivered as equals stay that way.