IRVINE, Calif. (April 3, 2017) – The Toyota Grand Prix of Long Beach has been a favorite of fans and competitors for more than four decades. The shimmering ocean… the palm trees… plus the yachts, blaring sunshine and all of the beautiful people will be joined this week by two gorgeous additions to the paddock: the Mazda RT24-P race cars in the IMSA WeatherTech SportsCar Championship. The look of the new race car was developed at Mazda’s Research and Development studio less than 30 miles from the track, and features the KODO Design – Soul of Motion look that is shared on all Mazdas. This is the first Southern California race for the new car, which was introduced to the world at the Los Angeles Auto Show in late 2016. Long Beach is the closest race to the Mazda North American Operations headquarters in Irvine, allowing employees to see the new cars in action. The two-car Mazda Prototype team will compete in the 100-minute BUBBA burger Sports Car Grand Prix, Saturday at 1:05 p.m. The race can be seen live on FOX-TV, beginning at 1:00 pm Pacific Time / 4:00 pm Eastern Time.

A Challenging Circuit
The tight confines of the 11-turn, 1.968-mile circuit threading along the streets of Long Beach presents a huge challenge to the racers.

“It’s a real mental challenge,” explained 21-year-old Tristan Nunez, driver of the Soul Red No. 55 Mazda Prototype. “There is no room for error. There are no run-off areas, so if you make a mistake, you’re into a concrete barrier. It’s a very demanding track and, as a street circuit, the surface is very bumpy. So, that makes it very technical for a driver. The new car is much more physical to drive, and you have to be sure your concentration or your body doesn’t give out.” 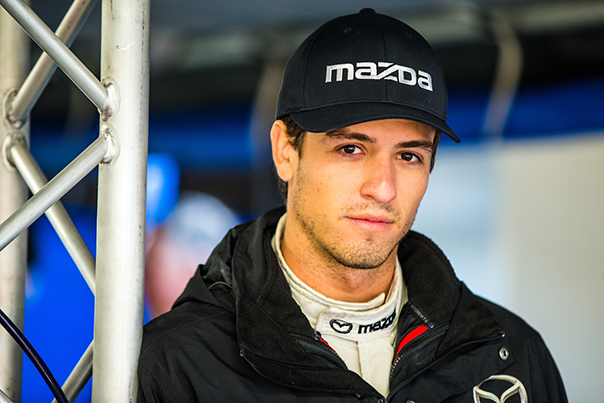 Mazda’s Drive for Good program – a corporate-wide philanthropic effort that generates charitable donations and hours of service (the most recent annual program has provided more than $15 million and more than 262,000 hours of service to deserving causes) – has components in the Mazda Motorsports effort. Mazda’s national-touring R.A.C.E. (Racing Accelerates Creative Education) program has reached more than 32,000 students since 2014, while Mazda racer Nunez created the “DNT TXT n drV Foundation” to educate students about distracted driving. This Thursday, he will speak to four Long Beach elementary schools.

“It’s a message I’ve been pushing since I was 16 years old, and I do all I can to spread the message of the dangers of distracted driving,” said Nunez, who finished fifth with co-driver Jonathan Bomarito in last year’s IMSA race at Long Beach. “This week, I’ll be speaking with elementary school kids. We’ll try to educate them early and get the message out while they’re young. Maybe they’ll go home and tell their moms and dads that a race car driver said it’s bad to text and drive and that their parents shouldn’t do it! It’s awesome that I get to speak to four schools because I can go to the race track knowing I reached more than 500 kids in one day.”

The No. 55 team is coming off of a fifth-place finish in the Prototype class at the 12 Hours of Sebring in March, while the No. 70 team aims to improve upon a fourth-place overall finish at Long Beach in 2016.