Since opening its doors in 1953, Willow Springs International Raceway has played host to numerous races, but little has changed over the years with the 2.5-mile circuit – the nine turns are still as challenging as ever. The track’s high average speeds, sweeping turns, and massive elevation changes demand respect and a driver’s full attention, making this a racer’s track like few others.

Nearly 200 drivers descended on the Rosamond, Calif., venue on March 11-12, 2017, for the first installment of the western swing of the Hoosier SCCA Super Tour – and as is typical of SCCA weekends, a large Mazda contingent was on hand, all vying to stand on one of the podium positions.

Group 5 on Saturday played witness to the David and Goliath battle waged by Marc Hoover, who would pit his No. 198 Hooverspeed/NRA/Necksgen/Redline Oil 1994 Mazda Miata against Corvettes and Vipers in Touring 1. Starting from the pole, Hoover was able to capitalize on the lightweight and nimbleness of his Miata to take the win, stretching the margin of victory to some 13sec in the end. “My car likes this track,” Hoover said after the race. “The greatest challenge is just to keep the tires under the car. But the car actually helped me out a little bit with that today. It developed a misfire and then was dropping cylinders. I kept having to reset the ECU from about the midpoint of the race until the end. It made the race challenging to drive.” 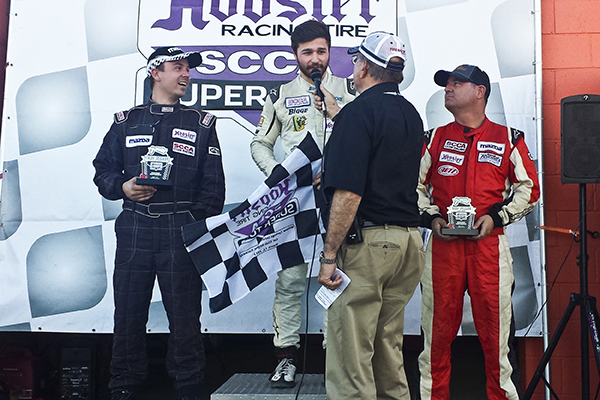 Later that day, spectators were treated to an ultra competitive Spec Miata race. Grant Westmorland set the pace in qualifying with a lap of 1:35.758, leading the field as they saw the green flag wave.

With numerous lead changes and a tight pack of cars at the front, it looked to be anyone’s race. In the end, Daniel Landon, behind the wheel of the No. 30 Bigge Crane/Langdon Construction/Cerini Motorsport 2001 Miata, clawed his way to the front to claim the win. “We started sixth and I knew it was going to be a long race, and hard – we have a lot of competitive drivers here in the field,” Landon noted. “We had to work hard for it – a lot of swapping back and forth, back and forth; there was a lot of action in the race. But ultimately to come out with the win was awesome!”

The action on Sunday in Spec Miata was just as fierce, with Steven Powers in the No. 145 Miatacage.com/East Street Racing 1999 Miata taking the win. Powers spent a good portion of his race out of podium contention, sitting in the fourth position, but it turns out that was part of his master plan. “I just wanted to get through the race clean,” Powers noted. “I took it easy on the start. Then knowing it’s a long race, I just hunkered down and picked off positions one by one.”