IRVINE, Calif. (January 4, 2017) – The two-car Mazda Prototype team has confirmed the driver lineup that will compete in the top category of the 2017 IMSA WeatherTech SportsCar Championship. For the third consecutive season, the drivers for the full 10-race championship season are Jonathan Bomarito, Tom Long, Joel Miller and Tristan Nunez. For the season-opening Rolex 24 at Daytona, Verizon IndyCar Series drivers James Hinchcliffe and Spencer Pigot will join the driver lineup in the all-new Mazda RT24-P race cars under the new Daytona Prototype international (DPi) rules.

The No. 70 ModSpace/Castrol Edge Mazda Prototype (Gunmetal Grey livery) will be driven by Long, 34, of Charlotte, N.C., and Miller, 28, of Hesperia, Calif. The duo finished sixth in the 2016 Prototype driver points championship after five top-five finishes.

For the 55th running of the historic Rolex 24 at Daytona, Long and Miller will be joined by IndyCar race winner James Hinchcliffe, 30, of Toronto, Canada. Hinchcliffe finished second in the most recent season of “Dancing with the Stars” on ABC-TV, and will race with Mazda at Daytona for the fifth time since 2012.

The No. 55 Mazda Prototype (Soul Red Crystal livery) will be driven for the third consecutive season by the pairing of Jonathan Bomarito, 34, of Louisville, Tenn., and Tristan Nunez, 21, of Boca Raton, Fla. Bomarito and Nunez recorded a league-leading three pole positions in 2016, led six races, and finished seventh in the final Prototype driver point standings. 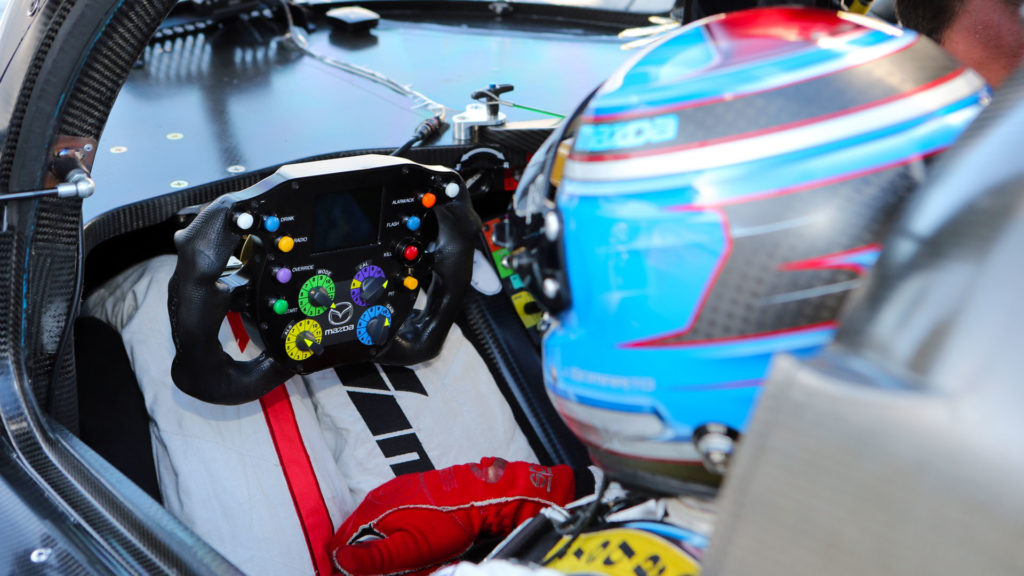 Spencer Pigot, 23, of Orlando, Fla., will join the No. 55 team for the second year at Daytona. The IndyCar driver made his Prototype debut with Mazda last year at Daytona, then raced at Sebring before leading races at Watkins Glen and Road Atlanta.

For this weekend’s Roar Before the 24 test sessions at Daytona, driver Ben Devlin, 34, of Norwich, England, will also join the team, utilizing his extensive prototype experience to help hone the preparation of the two Mazda RT24-P race cars. 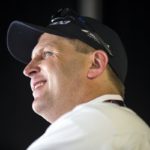 “When the Mazda brand embarked on providing the motorsports industry with a driver development scholarship program in 2007, it was our intention to develop drivers from the grassroots to the top levels in both open wheel and sports cars. With the Mazda Road to 24 and the Mazda Road to Indy now fully developed, we strive to promote from within. Each of our full-time drivers— Joel, Jonathan, Tom and Tristan— have come through at least one of the two programs, and they’ve given us the speed, continuity and great chemistry that a team must have to win. We are also thrilled to have Spencer and James back with us for the Rolex 24, as they have been a part of the Mazda family for many years. Their talent and chemistry with the team are extremely valuable. To have Ben and his experience with us this weekend is an added bonus.” 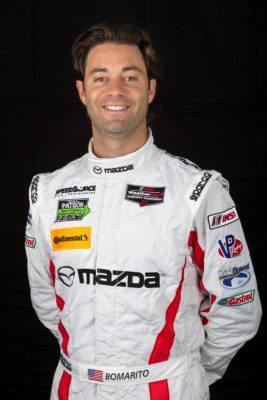 JONATHAN BOMARITO, driver, No. 55 Mazda Prototype
(Twitter: @JBomarito) Bomarito won the 2010 Rolex 24 at Daytona in the GT category, driving a Mazda RX-8 for SpeedSource with co-drivers Sylvain Tremblay, David Haskell and Nick Ham. Bomarito, who grew up in Monterey, Calif., won the 2003 USF2000 open-wheel championship, was a race winner in the Mazda-powered Atlantic Series, raced at Le Mans and nearly won the 2014 IMSA GTLM drivers championship before his stint in the Mazda Prototype. Bomarito is largely considered one of the top drivers at his home track of Mazda Raceway Laguna Seca. This is slated to be his 11th start in the Rolex 24. Bomarito returns as a Mazda factory driver one again.

“I am so excited for the 2017 season to officially get under way at one the best races in the world. Our Mazda Prototype is stunning, and the energy from the team, the series and our competitors is going to make for an incredible year.” 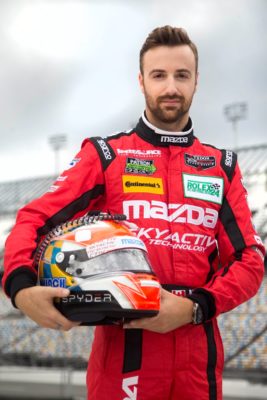 Prototype
(Twitter: @Hinchtown) Hinchcliffe missed the 24-Hour race last year as he recovered from near fatal injuries suffered at Indianapolis in 2015. He returned to win the pole position for the 100th running of the Indianapolis 500 in May, 2016.

“It’s great to be back behind the wheel at Daytona! It sucked sitting out last year’s race, but my focus at the time was getting myself back in shape for the IndyCar season. Coming back to Mazda and SpeedSource, where I’ve done all of my races at Daytona, is like coming home and I can’t thank Sylvain [Tremblay, SpeedSource owner] and John [Doonan, Mazda Motorsports director] enough for the chance. I can’t wait to be working with everyone there again, to get my hands on the new car, and try and deliver a win for Mazda.” 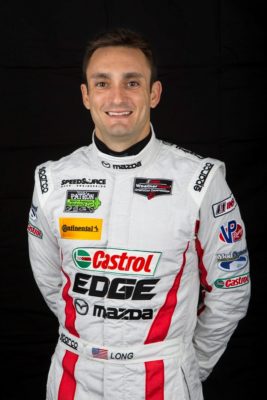 (Twitter: @TomLongRacing) Long has been a part of Mazda’s racing family since 2004, making 2017 his 14th season driving with Mazda. Long was the lead development driver on Mazda’s MX-5 Cup car that debuted in 2016, and this year will mark his seventh start in the Rolex 24. When he led the race overall at Daytona in 2015, it was the first time a diesel-powered vehicle led the historic endurance race that has been contested since 1962.

“I’m so excited to get the upcoming season kicked off at Daytona with our brand new Mazda RT24-P!  The anticipation has been building for Mazda and the entire team since unveiling the new DPi platform at the Los Angeles Auto Show. With the launch of the new Prototype era for IMSA in 2017, the field this year will be sure not to disappoint. The team has been working so hard to get our Mazdas prepared for the drop of that green flag, it’s been incredible to be a part of. We’re also thrilled to welcome back Hinch to our driver lineup this year!” 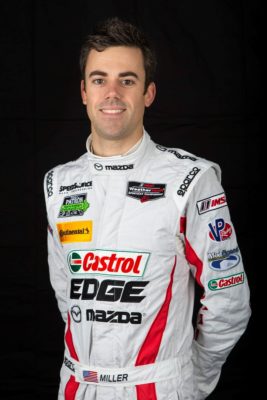 (Twitter: @JoelMilleracing) Miller came through the Mazda Road to Indy open-wheel program before he became part of Mazda’s endurance sports car effort. He is the current driver coach/mentor for the USF2000 series in the Mazda Road to Indy. A degreed mechanical engineer, Miller is a lead presenter of Mazda’s national-touring STEM education program, and will be making his fifth 24-Hours start this month, all with Mazda.

“Being back with Mazda in the new RT24-P is fantastic and I’m very fortunate for the opportunity. Being back together with Tom Long in the No. 70 will allow us to focus on the learning curve of the new car rather than anything else. The new platform presents an equal playing field and good opportunity for teams with the right preparation to shine. I look forward to working hard with Mazda Motorsport on our preparation with the new Mazda RT24-P DPi.” 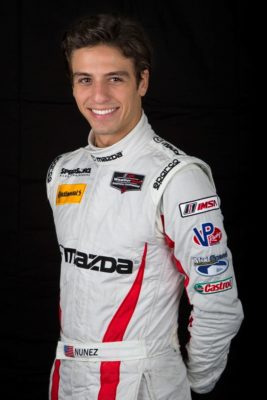 (Twitter: @TristanNunez) Nunez holds the record as the youngest champion in a professional class of road racing in North America. He won the IMSA Prototype Challenge presented by Mazda (nee: Prototype Lites) series in 2012 with 11 wins at age 17. He became a Mazda-backed driver after winning the prestigious open-wheel Walter Hayes Trophy event at Silverstone, England. Nunez does presentations across the country on behalf of his own “Dnt txt n drV Foundation,” which is devoted to educating young people about the dangers of distracted driving.

“I could not be more excited to get the season started. There have been quite a few rules changes [such as the DPi category] that I am sure will make for an exciting race. As for the drivers, to be paired with Jonathan again is such an honor. I have learned so much from him, and I’m looking forward to another year alongside him and being under the Mazda tent with Joel and Tom for the full season. Really, I couldn’t have asked for a better group! As for the additional guys we’ve got for Daytona, I don’t think the team could have made a better decision on who will complete the team. Spencer did an incredible job for us last year in the No. 55 on and off the track, and to have James and Ben back is a dream come true. I believe we’ve got what it takes to win, and I’m so excited to show that this season!” 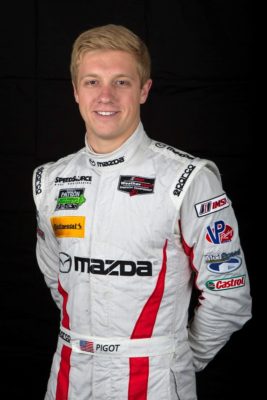 (Twitter: @SpencerPigot)   Pigot embodies the Mazda driver development scholarship program called the Mazda Road to Indy. The first (and still only) driver to win four Mazda scholarships, Pigot won the 2014 Pro Mazda and 2015 Indy Lights championships. He utilized his Mazda scholarship to compete in the 100th running of the Indianapolis 500, as well as the road and street circuit races in IndyCar in 2016 with Rahal Letterman Lanigan Racing and Ed Carpenter Racing. Pigot, along with teammates Miller and Bomarito, is a member of the Mazda Road to Indy Hall of Fame.

“I’m really looking forward to driving for Mazda again in my second Rolex 24 Hours of Daytona. The Mazda RT24-P is an incredible car and being able to help develop and improve the car from the very beginning has been a great experience. Mazda has given us a car capable of fighting for the win and I know we have the team to get the job done.” 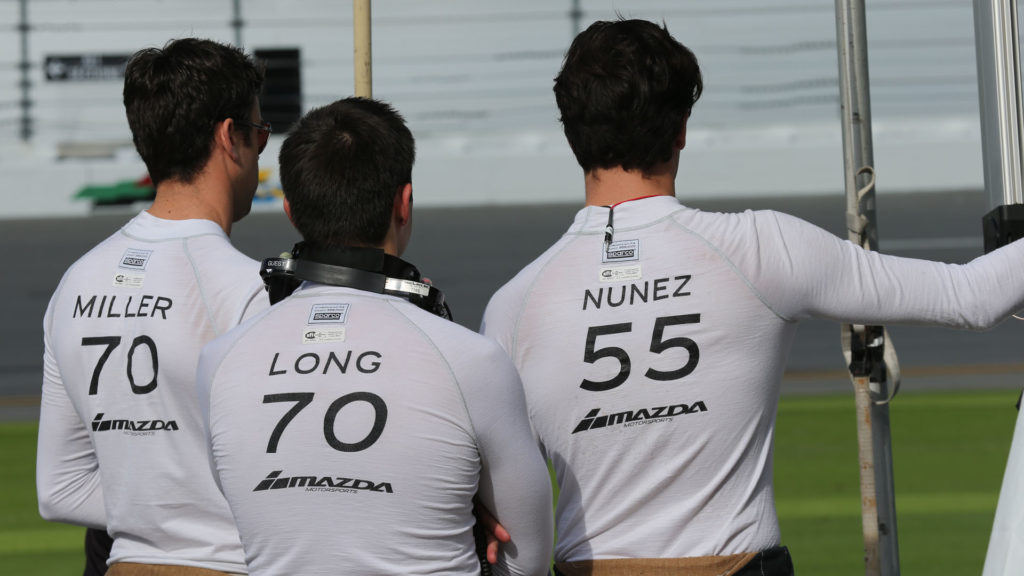