Note: Photos of the PM-18 are available on the series’ media photo site at http://media.roadtoindy.net/ and accessed with the password Media!1.

INDIANAPOLIS, Ind. – The middle rung of the Mazda Road to Indy Presented by Cooper Tires open-wheel driver development ladder, the Pro Mazda Championship Presented by Cooper Tires, will gain a significant upgrade in 2018 with the introduction of the brand-new Tatuus PM-18. The prototype car was unveiled today during the annual Performance Racing Industry Show at the Indianapolis Convention Center by Dan Andersen, Owner/CEO of Andersen Promotions, John Doonan, Director of Motorsports for Mazda North American Operations, and Chris Pantani, Director of Event Marketing and Motorsports for Cooper Tires.

The PM-18 represents the completion of an entire overhaul of all three levels of the Mazda Road to Indy, which offers scholarships at every step to assist drivers in progressing all the way from the grassroots of the sport to the Verizon IndyCar Series and the Indianapolis 500. It follows the introduction of the Dallara IL-15 to Indy Lights Presented by Cooper Tires and the Tatuus USF-17 to the Cooper Tires USF2000 Championship Powered by Mazda. The PM-18 will replace the venerable Elan Pro Mazda chassis which was introduced in 2004 and provided the basis for a long list of talented young drivers, including Marco Andretti, Conor Daly, James Hinchcliffe, Spencer Pigot and Graham Rahal, to make their way toward the pinnacle of the sport.

For cost-effectiveness, the PM-18 shares the same carbon and aluminum honeycomb monocoque chassis as the USF-17, which made an impressive debut during the recent Mazda Road to Indy Chris Griffis Memorial Test at the Indianapolis Motor Speedway Grand Prix circuit and will form the basis of the USF2000 series beginning next season. The car meets all current FIA safety standards, including side-impact panels, front and rear impact structures, HANScompliant IndyCar head restraint, front and rear wheel tethers, upgraded uprights and front bulkhead structure for USA-specific oval racing. The initial order of 35 USF-17 cars has sold out.

“We are very excited to unveil the next generation Pro Mazda chassis,” said Andersen. “Scot Elkins [Project Manager and Race Director Pro Mazda and USF2000] and Tatuus have done a great job in augmenting the USF-17 base car to provide everything drivers on the second step of the ladder need to continue their career development. We currently plan to begin prototype testing in March of next year, with the first shipment of cars delivered to teams in June to allow for a summer test program. With the success of the USF-17, I can’t wait to see this car on track.”

“It’s a pretty good next step based on all the work that we have done so far,” said Elkins. “We know that the performance level is going to be a lot higher than the USF2000 car and the aero is going to be more like the Indy Lights car which fits within the ladder quite well. It will allow drivers to transition to the next step much easier. We obviously have more horsepower and more aero than the USF2000 car, which was the entire intention, and we are excited about it.”

The PM-18 will be the series’ standard for at least the next five years.

“We talk frequently about the global growth of the Mazda Road to Indy program, and having topline, modern race cars on each step of the MRTI ladder increases the likelihood of seeing the finest young drivers in the world at each step,” said Doonan. “We also talk about providing value for our teams and drivers, and the PM-18 is a wonderful example of an affordable race car that is safe and fast. We’ve already seen the huge interest in the new USF2000 car for next year, and we expect much the same for the Pro Mazda series in 2018.”\

With the PM-18 in the spotlight when prototype testing begins, there are an array of incentives for drivers to experience this vital step during the 2017 transitional year. The champion’s Mazda scholarship to advance to Indy Lights Presented by Cooper Tires in 2018 has been increased by $200,000 bringing the total award to $790,300. The champion will also receive a Cooper Tires Tire Award valued at $75,000 and a series entry award valued at $24,000. Year-end prizes will total over $1.1M.

Additional enhancements include a one-day Indy Lights test for each of the top-three finishers in the championship and a new Pro Mazda Rookie of the Year Mazda Car Award which features a new Mazda street car of choice to the winning driver.

“The new look of the PM-18 is amazing,” stated Pantani. “With the launch of the IL-15 and the recent introduction of the USF-17, the Mazda Road to Indy Presented by Cooper Tire is now completely revitalized. Cooper Tire is proud to be associated with every step of the only dedicated driver development program that leads directly to a seat in an Indy car.”

About Pro Mazda: The Pro Mazda Championship Presented by Cooper Tires debuted in 2013 as a new series, replacing the Star Mazda Championship which ceased operation in 2012 after 22 years. The series is sanctioned by INDYCAR and owned and operated by Andersen Promotions. It is the second official step on the Mazda Road to Indy ladder system with the series’ champion awarded a scholarship package from Mazda to advance to Indy Lights Presented by Cooper Tires competition the following year. For more information, visit www.promazdachampionship.com.

About Mazda, Mazda Motorsports: Mazda Motorsports boasts the most comprehensive auto racing development ladder system of any auto manufacturer in the world. The Mazda Road to 24 program offers a number of scholarships to advance drivers up the sports car racing ladder, beginning with the MX-5 Cup series and culminating with the Mazda Prototype team. The Mazda Road to Indy is a similar program that includes Mazda-powered categories of USF2000, Pro Mazda and Indy Lights. In grassroots road racing, more Mazdas race on any given weekend in North America than any other manufacturer. Mazda is also the title sponsor of the renowned Mazda Raceway Laguna Seca in Monterey, Calif. Follow all of the latest news at MazdaMotorsports.com, @MazdaRacing on Twitter, and MazdaMotorsports on Instagram and Facebook.

About Cooper Tire & Rubber Company: Cooper Tire & Rubber Company, together with its subsidiaries, is a leading designer, manufacturer and marketer of innovative, great-performing tires that people depend on for all of life’s road trips, whether on city streets, off-road adventures or high-speed tracks. In fact, Cooper is proud to sponsor and race in all three levels of the Mazda Road to Indy development program within the IndyCar racing series. Cooper tires can also be seen on the track as a sponsor of the short course off-road TORC Series. Headquartered in Findlay, Ohio, Cooper, together with its subsidiaries, has manufacturing, sales, distribution, technical and design operations in more than one dozen countries around the world. In our second century in the tire business, Cooper looks toward a future where innovation will continue to drive our products and our products will continue to drive the world. To connect with Cooper, visit www.coopertire.com, www.facebook.com/coopertire or www.twitter.com/coopertire. 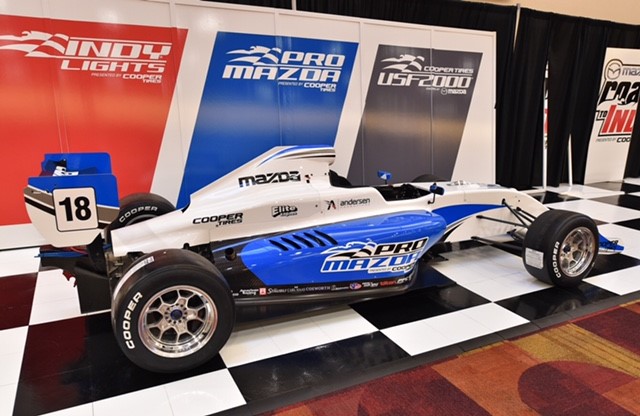