BRASELTON, Georgia (September 29, 2016) – The 2016 Idemitsu Mazda MX-5 Cup presented by BFGoodrich® Tires today wrapped up its inaugural season of competition with the new-generation 2016 Mazda MX-5 race car.  The series champion (seen above) is Nathanial “Sparky” Sparks (No. 8 Sick Sideways), who earned the $200,000 Mazda Road to 24 (MRT24) scholarship with the ideal combination of speed and consistency throughout the season.  Over the 12-race, six-weekend championship, Sparks scored one win and five podium finishes, and only had one DNF (did-not-finish).  That DNF was in the final race, after he had secured the title.

John Doonan, director of motorsports, Mazda North American Operations: “It’s hard to put into words what this season means for Mazda. Building on a decade of success with the previous-generation MX-5 Cup series helped, but launching our all new MX-5 Cup racecar was a massive task and everyone from Mazda, BFGoodrich, Idemitsu, Long Road Racing, and most of all, our customers, stepped up.  It’s been an amazing season with many breakout performances by drivers and teams.  My hat’s off to Sparky for demonstrating the Mazda challenger spirit to earn the latest Mazda Road to 24 scholarship, and everyone at Mazda salutes his championship as we welcome him to the Mazda racing family.”

Nathanial Sparks, series champion, when asked about his progression from 2012 when he started racing in the series with a one-car family team, to now: “It’s like looking at old pictures and saying…did I really do that? We started off at the bottom and learned and learned and learned and grew to where I am now. I couldn’t have ever done it without the vision that my mom and dad had. I was in high school, playing baseball, and my dad asked if I would be interested in going racing, and I just caught the bug.  After securing the championship now, I’ll look back in 30 years and I can say …this was all worth it.  Being able to have a smile on my face and show my mom, dad and fiancé that their efforts weren’t in vain is special. This is all so special.”

John Dean II, race-one winner: “It feels incredible to get my first win this season. Sparky has been incredibly fast this year, and the way we work as a team, we don’t really have to think too much about where to put the car since we’ve been teammates for so long. And, to make it better, I’m so excited to be on the podium with him winning the championship.” 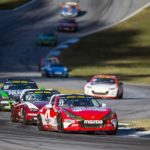 Ara Malkassian, race-two winner and series championship runner-up: “It was really great to win the final race of the inaugural season of the Idemitsu Mazda MX-5 Cup presented by BFGoodrich® Tires. I can’t thank the ALARA Racing team enough for getting me a great car, and it feels great to get my first win this year. Very proud of Chris Stone for two podiums for ALARA this weekend, and congrats to Sparky on the championship. Lastly, I would like to dedicate this win to a dear friend and a long time Mazda racer, Keith Verges.”

Mark Drennan, Rookie-Of-The-Year: “It feels amazing to secure the Rookie of the Year title after such a tough season. I really focused on staying out of trouble in the final two races, instead of aggressively racing for the win. Coming into the series, I knew it was going to be very competitive, and it was all that and a whole bunch more all year. There are so many talented new drivers, combined with exceptional series veterans, that the entire season was super competitive.  It required me to give my all for every race.”

Morning race – Polesitter John Dean II led 26 of 27 laps, but was never more than a half-second ahead, and was most often leading a seven-car draft.  For the defending series champion, it was his first win of the season, having suffered through multiple on-track incidents in the preceding 10 races.  Dean has scored more poles and led more laps than anyone else this year.  Chasing Dean all-race long was his teammate Sparks, Chris Stone, Robby Foley (No. 63 Atlanta Motorsports Group), Mark Drennan, and Ara Malkhassian.  Malkhassian was the only other racer to lead a lap.

Afternoon race – Just eight hours after the checkered flag from the morning race, the teams were ready for the 12th and final race of the season.  Again, John Dean II started from the pole, but Chris Stone worked the draft and led the first lap, before Dean took the point of the eight-car draft.  With Robby Foley leading, the race complexion changed completely when a full-course caution slowed the race after an incident between Nathanial Sparks and Nikko Reger.  The final two-lap sprint to the checkered flag was a battle between Foley, Dean and Malkhassian.  Malkhassian timed his move perfectly on the last two turns and scored the win over Dean and Stone, who repeated his third place in the morning run.

History Repeats.
John Dean II and Ara Malkhassian were the only two racers in the 30-car field who had previously won at Road Atlanta.  Dean had wins in 2013 and 2015, while Malkassian won in both 2007 and 2011.

Who scored the fast laps?

The top ten overall in points are:


Complete race results, from all 12 races, are available online at www.MX-5Cup.com

The Idemitsu Mazda MX-5 Cup presented by BFGoodrich® Tires is the signature spec series for the Mazda Road to 24 (#MRT24), the sports car counterpart to the Mazda Road to Indy (#MRTI). On both paths, Mazda-powered champions earn a Mazda scholarship to advance their career. The MX-5 Cup champion earns a $200,000 scholarship.

Information on the car is online at www.mazdamotorsports.com.