IRVINE, Calif. (September 23, 2016) – Next Friday afternoon at Road Atlanta, co-drivers Chad McCumbee and Stevan McAleer will be striving to earn a second straight championship in the Street Tuner (ST) class of the IMSA Continental Tire SportsCar Challenge. Driving for the Freedom Autosport team, which is based at Road Atlanta, they lead the point standings by eight over the second-place drivers and by 10 points over third place. They are trying to become the first duo to win back-to-back titles in the history of the Continental Tire series, while Freedom Autosport is striving for its first team championship. The Road Atlanta 150 will determine the champions in a two-hour, 30 minute race on September 30 as a featured part of the Petit Le Mans weekend. Mazda and Mazda-powered race cars will compete in three other categories at the season-ending event. 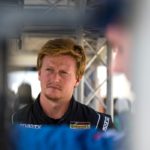 But, McCumbee and McAleer (pictured left), who have two victories this season, might very well have trailed significantly in points if not for some extreme teamwork in last week’s race at Circuit of the Americas (COTA). Mazda always stresses close teamwork and a family approach among all of its racing categories and teams, but no greater display of that spirit had been seen before that race. 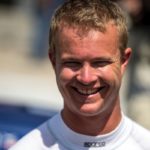 From the start, McCumbee (pictured right) streaked away from the field at COTA in the No. 25 ModSpace-backed Mazda MX-5, building a 20-second lead until he pulled into pit lane to hand the car to co-driver McAleer at the halfway point of the race. They had begun the day in second place in the standings, but the leaders had serious mechanical issues from the start. It seemed a perfect day to capitalize with maximum points.

“When I left pit lane, the car was super hooked-up,” said McAleer, who was expecting a victory. “From the get-go, I was trying to save the brakes and the transmission and not overdrive the car or use any of the curbs just so we could make sure we could get through to the end.”

But, in racing, things are rarely simple. Fifteen minutes later, after a balky shift, McAleer radioed his crew. “Hey guys, we’re probably going to have an issue with third gear…”  The very next lap, he lost third gear entirely with an hour remaining in the race.

While it slowed his pace, McAleer lost only a few positions. Then, almost simultaneously, fourth gear and the car’s ABS [anti-lock braking] system failed.  “Guys, we’re in trouble” he radioed. “I only have second and fifth gear now.”

While McAleer was having issues in the No. 25 Mazda, his teammates Liam Dwyer and Andrew Carbonell were having troubles of their own in the No. 26 car. In a season rocked by bad luck, they had suffered a broken axle. But, the crew jumped to fix the problem in less than an hour to allow Carbonell an opportunity to finish the race.

As Carbonell pulled back onto the track, his radio crackled. “Hey Andrew, the No. 25 is having gearbox issues…”  At the time, Miami-native Carbonell understood McAleer had only lost one gear, and was more worried about his own race car. “Let me make sure our car works,” Carbonell told the crew. “We just rebuilt the rear end and suspension. Let’s make sure our car corners and brakes. And then I’ll do what I can.”

As Carbonell gained confidence in his own Mazda, he pulled behind McAleer’s MX-5. Using the front bumper, Carbonell pushed McAleer’s Mazda out of the turns and down the straights to help compensate for the missing gears. After five laps of being pushed, the Scottish-born McAleer was back on the radio. “Guys, it’s not looking good. I’ve lost second gear. I only have fifth gear.”

“I was trying to roll as much entry speed as I could, more than anyone would normally use,” said McAleer. “I knew I had Andrew to push me out of the corners.”

“I was there to push him to get him up to speed,” said Carbonell. But it wasn’t easy. “It was a fine, fine balance. I also had to keep my car cool. As hot as it was at COTA, we were seeing some extreme temperatures. I was doing everything I could to manage his time loss, our engine heating and the championship points. It would have been bad to have his car lose a gearbox and my car blows a motor!”

With Carbonell strategically nudging McAleer, he also backed off as to not upset the front car in any of the 20 challenging corners at COTA.  As the checkered flag flew, the two cars crossed the line as if tied together. With the generosity of their teammates, McCumbee and McAleer finished seventh to take over the points lead with one race remaining.

“Definitely a turn of luck,” McAleer said. “We thought we had the win – we should have had the win –  and then we thought we would have a DNF [did not finish], so we were very excited to get away with seventh place. There were so many things that fell in line for us. If they threw a full-course yellow at any point in the last 30 minutes, we were absolutely going to have a problem. We would have had serious issues. If Chad hadn’t built up a 20-second lead, then we wouldn’t have finished seventh.”

Carbonell explained how a rough afternoon turned into a success.

“It was nice, in the big picture, that our unfortunate event turned into a moment of grace for our teammates,” Carbonell said. “Freedom did a good job of getting the car back together and we were able to rejoin the race. Obviously, we’re all competitors, we all race each other, but as a Mazda competitor, as we always say, it’s a family mentality. Just like you’d help a brother or sister, I was going to help my teammate.”

“It was exciting and it was huge teamwork,” said a grateful McAleer about the push to the finish. “That’s obviously something that Mazda does really well: teamwork. It was super nice to get a little help.”

“I had people come up to me after the race and say that was the purest example of teamwork that they had ever seen,” laughed Carbonell. “That was incredible. Plenty of people came after the race to comment on that. To come away with a seventh place finish – with ONE gear – that should have been a 20th-place finish at best. It was amazing what we were able to salvage.”

LOOKING AHEAD TO THE CHAMPIONSHIP BATTLE
“Road Atlanta has always been a good place for our Mazdas,” said Carbonell. “It has a long straightway, but it is a very technical track. Freedom Autosport is based out of shops at Road Atlanta, so it’s our home track. We were able to test there halfway through the season and we developed a good package for the race. If they win the title, I’ll be extremely happy that Freedom Autosport has worked toward the championship for eight years now and it’ll be a great moment to see all of their hard effort culminate into a championship result.”

As for the title contenders, McAleer is cautiously confident.

“I am confident at one of my favorite tracks on the continent,” he said. “The Porsches [the main competitors for the title] are pretty damn good here, and there’s so many of them. I think we’re going to have a hard time, but the exciting thing is that Chad and Andrew did a test here a couple of months ago. Chad was blown away with the pace the car had compared to last year. Andrew also said that the setup changes were also a gain. We might have an exciting car with us, and if it’s anywhere like those guys said it would be, I fully expect another championship next weekend.”

GOING FOR HISTORY
McCumbee and McAleer are attempting to win back-to-back titles, something no pair of drivers have achieved in the history of what is now called the Continental Tire series. Individually, David Haskell, who now runs the engine department at SpeedSource, Mazda’s factory team in the Prototype division, won back-to-back ST driver titles in 2004 and 2005, the first with Mazda co-driver/team owner Sylvain Tremblay, and the second as the sole champion. Will Nonnamaker also won the ST class in 2001 and 2002 with different co-drivers.