IRVINE, Calif. (September 13, 2016) –  After setting a Prototype-class qualifying track record and leading 35 laps at the most recent IMSA WeatherTech SportsCar Championship event, the Mazda Prototype team looks to continue their blistering speed in the hot and humid conditions at the Lone Star Le Mans event this week at the Circuit of the Americas (COTA) in Austin, Texas. The team is going for a third consecutive pole position (and fourth of the season) for the two-hour, 40-minute race Saturday morning at 11:35 am Central Time. Fans can watch the race live on FS2 or on the Fox Sports Go app. This is the ninth race of the 10-round championship, with the season finale set for Road Atlanta’s Petit Le Mans in October. 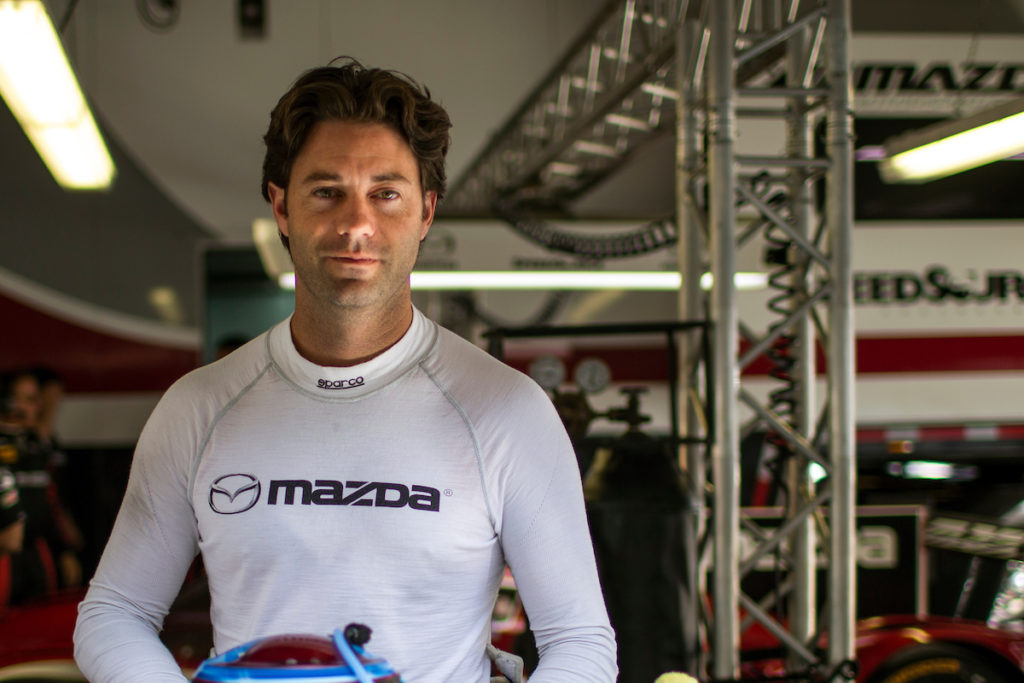 Tom Long and Joel Miller are the co-drivers in the No. 70 Castrol Edge/ModSpace Mazda Prototype, while Tristan Nunez and Jonathan Bomarito will pilot the No. 55 Mazda. Bomarito (pictured above), who set a qualifying record last month at Road America and led the first half of the race, described what to look for this weekend at COTA.

“It’s a good track – both for drivers and spectators,” said Bomarito. “The way they have long straightaways into wide passing zones with big braking zones allows for good passing opportunities and a lot of side-by-side racing for the fans.

“But, it can be a difficult track with traffic, specifically the first half,” Bomarito said, about the first 10 of the 20 corners on the circuit. “There are a lot of flowing corners, one after another where the cars are going back and forth, using all the road. There’s not a lot of time for the faster Prototype cars to get by. It can lead to some frustration if you hit traffic at the wrong time, and it can really cost you a lot of time. It puts added stress [on the driver], but you’re just lucky or unlucky. You don’t want to become impatient – that leads to contact – but you have to be aggressive as well. There’s always a constant fine line to balance risk and reward.”

Bomarito’s co-driver Nunez has traditionally been the driver who qualifies and starts the race in the No. 55 car. But, at Road America, the roles were reversed. We asked Bomarito to explain the differences.

“It’s quite a bit different from a driver’s standpoint. In one position you’re qualifying and starting the race where you’re trying to give the next driver the best car in the best position possible. The second driver’s job usually means you’re in there longer and finishing the race, when the intensity level is usually higher. Two different roles – but two very important ones. (Road America) showed it doesn’t matter between me and Tristan. He qualified on pole and led races and I did the same. We’re strong and we’re both capable of either role. We’ve been very similar on pace and it allows us to do different things with our race strategy that some other teams can’t.”

What are those strategy options?
“One great option for us is the potential to do two driver changes at COTA,” said Bomarito. “Historically it’s been very hot and humid there with not a lot of airflow in the car, so it’s pretty physical inside there. The last few years that’s been the case for sure, and it should be hot again. It might give us the strategy option for two driver changes to make sure we’re as fresh as possible at the end. Not every team has the luxury of two drivers that are as strong on pace like we’ve been – and like the No. 70 car with Tom and Joel. So, it allows you those opportunities.”

Continental Tire SportsCar Challenge Heats Up With Two Races to Go
The Mazda contingent in the Continental Tire SportsCar Challenge will race Friday afternoon at COTA in their own two-hour, 30-minute endurance tilt. Defending series champions Stevan McAleer and Chad McCumbee have a solid hold on second place in the championship standings, and look to gain ground this weekend and at the finale at Road Atlanta in October.

Mazda’s national-touring STEM program returns to Austin
Nearly 30,000 students across North America have attended Mazda’s R.A.C.E. (Racing Accelerates Creative Education) presentations, and that number will grow Wednesday morning in conjunction with the Austin Public Independent School District at David Crocket High School. The Mazda STEM (Science, Technology, Engineering and Math) program features Joel Miller, one of the Mazda Prototype drivers and mechanical engineer, and uses various demonstrations of how the science of auto racing is applied. The students will also have the opportunity to see the 190-mph Mazda Prototype race car. The presentations will take place at 9:00 am and 11:05 am Wednesday. (Media are encouraged to attend. Contact Jade Gurss for details.)

Mazda Motorsports
Mazda Motorsports boasts the most comprehensive auto racing development ladder system of any auto manufacturer in the world. The Mazda Road to 24 (#MRT24) program offers a number of scholarships to advance drivers up the sports car racing ladder, beginning with the Global MX-5 Cup series and culminating with the Mazda Prototype team. The Mazda Road to Indy (#MRTI) is a similar program that includes Mazda-powered categories of USF2000, Pro Mazda and Indy Lights. In grassroots road racing, more Mazdas race on any given weekend in North America than any other manufacturer. Mazda is also the title sponsor of the renowned Mazda Raceway Laguna Seca in Monterey, Calif. Follow all of the latest news at MazdaMotorsports.com, @MazdaRacing on Twitter, and MazdaMotorsports on Instagram and Facebook.