– All-Mazda Weekend at Mazda Raceway Laguna Seca Determines champions –
Monterey, Calif. (September 11, 2016) – The Mazda Road to Indy allows young drivers to compete each year for championships that award them with nearly $2 million in Mazda scholarships to further their career. Ed Jones, Aaron Telitz and Anthony Martin were crowned champions today at Mazda Raceway Laguna Seca, earning them a step up the ladder in open-wheel racing. It was an All-Mazda weekend featuring five different racing series, all powered by Mazda. There were more than 80 entries with drivers from 19 countries.

Ed Jones, a British driver who resides in Dubai (pictured above), finished fourth in today’s Indy Lights race to clinch the 2016 Indy Lights championship. He earned a $1 million scholarship and now advances to the Verizon IndyCar Series for at least three races next year, including the 2017 Indianapolis 500. This is the first American championship for the 21-year-old Jones, and also the first US title for the European open-wheel powerhouse Carlin Racing team. Jones won the title by two points over Santiago “Santi” Urrutia of Uruguay. Urrutia finished second in today’s race that was won by American Zach Veach. This was the second win in two weeks and third of the season for Veach. California driver Kyle Kaiser won Saturday’s Indy Lights race, and finished the season third in points. 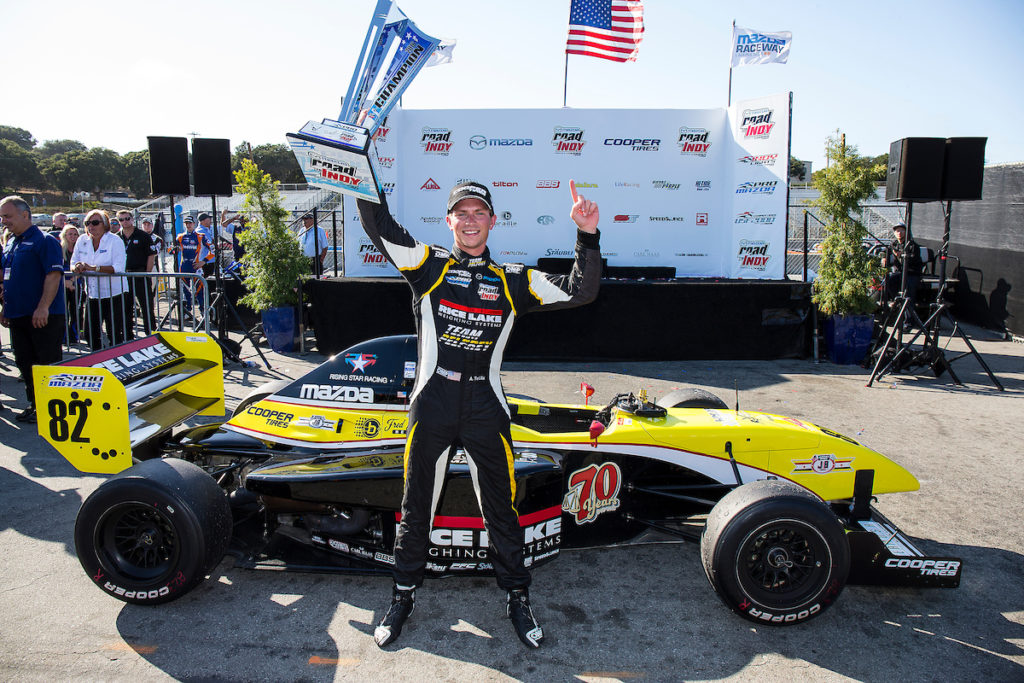 Aaron Telitz of Rice Lake, Wisconsin (pictured above), won his second Mazda scholarship by winning Sunday’s final Pro Mazda race to secure the series championship. (The 24-year-old Telitz won a Mazda scholarship in 2012 that allowed him to begin racing in the Mazda Road to Indy.) He earned the nearly $600,000 Mazda prize to move up to the Indy Lights series next season. It was a close title battle between Team Pelfrey teammates Telitz and Pato O’Ward, the 17-year-old driver from Monterrey, Mexico. O’Ward won the first of three races this weekend, while 18-year-old Argentinian driver Nicolas Dapero earned his first Pro Mazda win in the second. Telitz, who won six races this season, dominated the third and final race, starting from pole position and leading every lap to earn the title. 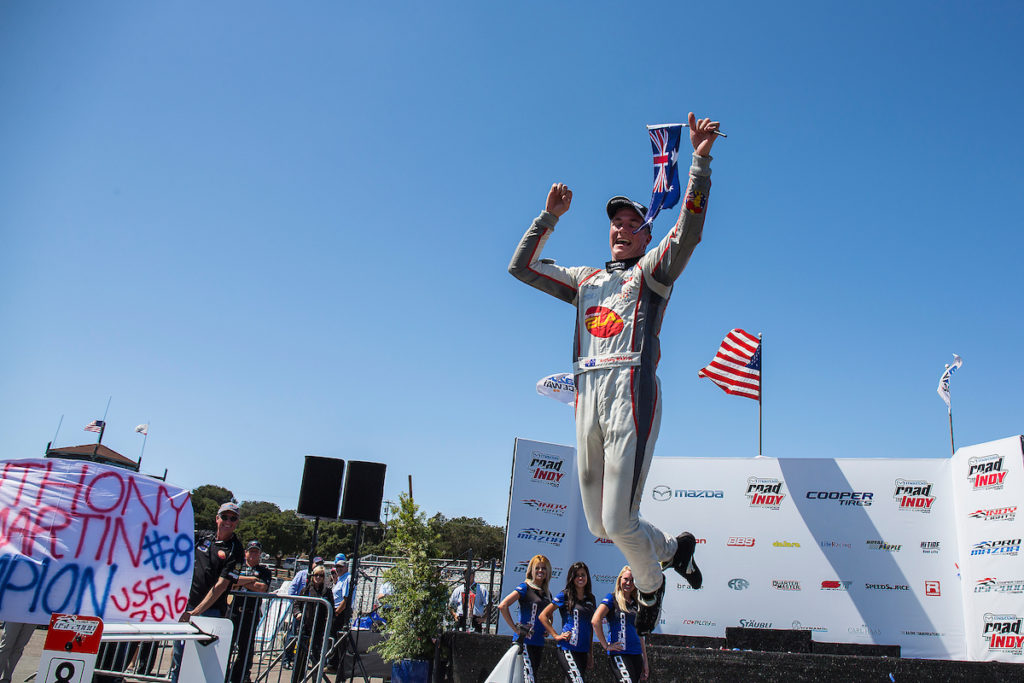 A pair of teammates from Cape Motorsport with Wayne Taylor Racing battled all season for the USF2000 championship, and 18-year-old Anthony Martin of Kalgoorlie, Australia prevailed for the championship with two Top-3 finishes this weekend. He topped his teammate Parker Thompson of Red Deer, Alb., Canada for the title by winning seven races this season. Martin earned the Mazda scholarship of more than $363,000 to move up to Pro Mazda series next season. While the two championship contenders earned the media attention, it was Brazilian Victor Franzoni of ArmsUp Motorsports who dominated the weekend. Franzoni was quickest in each practice and qualifying session and then won both races from the pole. Franzoni finished the season third in points.