ELKHART LAKE, Wis. (August 7, 2016) –  For much of the weekend, the two Mazda Prototype cars were the ones to beat at the Continental Tire Road Race Showcase at Road America. The No. 55 car with driver Jonathan Bomarito won the pole position with a sizzling, track record lap, as the No. 70 car with driver Tom Long qualified on the second row, fourth-best overall. The No. 55 car led the race three times for 34 laps (the most laps led in any race by the Mazda Prototype team) and set the fastest lap of the race (1:55.458 by co-driver Tristan Nunez) before a fuel strategy gamble fell victim to ill-timed yellow flags to finish in fifth place.

Bomarito leapt into the lead for the first 21 laps of the race on the 14-turn, 4.048-mile circuit, while Long ran easily in fourth place until approximately 10 minutes into the two-hour, 40-minute race. Trouble with the oil pump system knocked Long from the action, and left the No. 55 as the lone Mazda in the race. Bomarito gave way for co-driver Nunez, who led twice and set the fastest lap of the race.

The next IMSA WeatherTech SportsCar Championship race takes place September 16 – 17 at the Circuit of the Americas in Austin, Texas.

Jonathan Bomarito, Driver, No. 55 Mazda Prototype
You won the pole and led the first 21 laps of the race. Even with a disappointing finish, describe your event:  “We had a good weekend. We were very quick in practice and qualified on the pole position with a track record. The start of the race was drama-free, just how we like it. We had a good pit stop and made our driver change and we just got off-sequence with the rest of the Prototypes. In the end, it was probably the right call but it didn’t work out, timing-wise, with the yellow flag.

“Leading, setting the pace, and pulling away from the field, there’s nothing more satisfying than that feeling. We were pushing hard the whole time. You’re just trying to get that buffer, that gap, because with traffic you get that accordion where you could lose a lot of time. You never know where you’ll catch traffic and the lapped cars. So, if you have those few seconds of buffer, it gives you more leeway in traffic. We were pushing hard but with that yellow, it took it away and we went off-sequence.”

Tristan Nunez, Driver, No. 55 Mazda Prototype
You led twice and set the fastest lap of the race. How was it? “It’s a ton of fun, being in the heat of the competition with a really fast car. It’s great for Mazda that we led the race several times and were in the fight to the finish. We have two races left to keep pushing hard for the first win. We did everything we could in the Mazda team. That’s all we can do right now: focus on our own race.”

Tom Long, Driver, No. 70 Castrol Edge/ModSpace Mazda Prototype
A short stint, but how were the opening laps? “On the positive side, our car was really excellent. Our Mazda handled so well in the race – I know it was short-lived – but we had been dealing with some handling issues earlier in the weekend and in qualifying, and we fixed it for the race. I was really encouraged because we had a really good car, which makes it more disappointing when it all goes away so soon. There was no warning. I just had a call from the pit to come immediately to the garage. And that was it.”

Joel Miller, Driver, No. 70 Castrol Edge/ModSpace Mazda Prototype
You’ve explained all week about this being your favorite track, but you never had a chance to step into the car in the race. “It’s a big bummer here at Road America. Definitely my favorite place and we had shown good progress through all of the practice and qualifying sessions, going faster and faster. We know the cars have pace, we just have to look ahead and figure how to get it to the end. We’ll go to Texas in about a month and go for it there.” 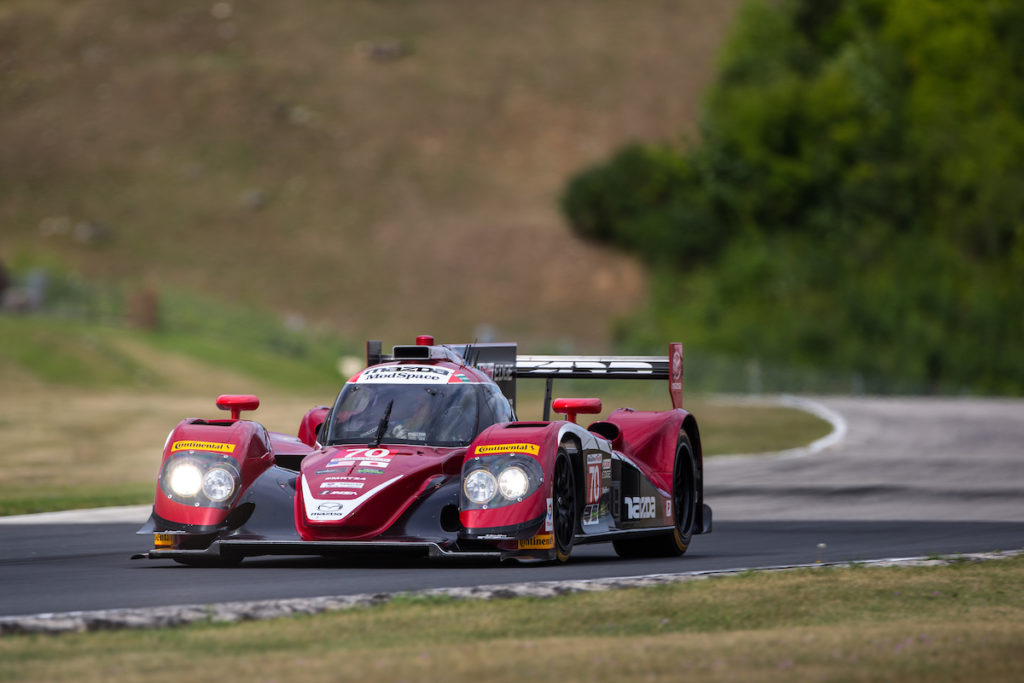