IRVINE, Calif. (June 29, 2016) –  This weekend at Watkins Glen International, the Mazda Prototype team will carry special liveries to honor Mazda’s win in the 1991 24 Hours of Le Mans. For Chad McCumbee and Stevan McAleer, they too will be trying to emulate a memorable Mazda victory. The two drivers teamed to win the Continental Tire SportsCar Challenge race last year at the Glen on their way to winning the ST-class championship in the blue, white and silver ModSpace Mazda MX-5. The duo look to repeat their success this weekend in the 2.5-hour Continental 150 at the Glen Saturday afternoon as a part of the Sahlen’s Six Hours of The Glen event.

McAleer, who will be racing near his home in Putnam Valley, NY, and McCumbee, of Ocean Isle Beach, NC, moved to the Freedom Autosport team this season from CJ Wilson Racing, and are currently second in the series point standings in their ModSpace-backed No. 25 car after winning the Continental series race at Mazda Raceway Laguna Seca in May. Teammates Andrew Carbonell and Liam Dwyer finished second at Mazda Raceway, while the third Freedom Autosport team of Britt Casey Jr. and Danny Bender finished eighth in the No. 27 Trumpf MX-5.

Because of IMSA’s Balance of Performance (BoP) regulations, the Mazda MX-5s have an added 95 pounds on-board this year. Does that make a big difference at the 3.4-mile, 11-turn course?

“Mentally, the added weight prepared us for a tough season,” McAleer said. “But, at Watkins Glen, we’ve been so strong there over the years so – on paper – we’re one of the favorites again this year. We’re going in with a lot of confidence. We’re second in the points and if we can get away with a top-five, we’re putting ourselves in a good standing for the rest of the season.”

This is the fourth of 10 races this season. Is it too early to worry about the points championship?

There is a brand-new, super smooth track surface at Watkins Glen. Will this help or hurt the Mazda MX-5s?

“It could hurt us,” said McAleer. “A front-wheel-drive car is going to be good [on tires] for a shorter period than our rear-wheel-drive MX-5. When the front tires are both turning and driving the car, they wear quicker. When you’re on a track with less grip, those tires start to go and the lap times suffer. At Watkins Glen, on the brand-new surface, it’s so grippy now that even when those front tires have fall-off, they’re still strong. The Mazdas are always good on a long run and I think if the race goes green for two-and-a-half hours, Chad and I will be somewhere near the front, but we’ll have to work pretty hard for it.”

“It’ll be tougher,” said McCumbee. “But we’re up for the challenge.” 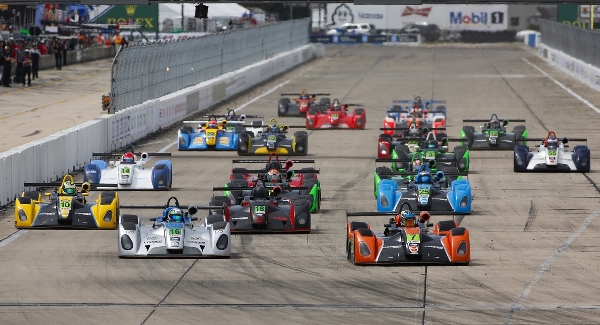 Three races are on the schedule for the Mazda Prototype Lites series this weekend. At the season-opening event at Sebring International Raceway, Clark Toppe, from The Woodlands, Texas, won the first race while Sandy, Utah’s Austin Versteeg took the second. The two teenagers lead the point standings heading into the weekend for the sleek and very fast prototype cars with Mazda power. Two races will take the green flag Friday, with the finale taking place Saturday morning.

Fans Can Drive Original Watkins Glen Road Course with Mazda Ride and Drive Program
Race fans who attend the Sahlen’s Six Hours of the Glen will be able to drive any of five new models of Mazda vehicles on the original 6.6-mile street course that winds through the village of Watkins Glen. The historic circuit debuted in 1948. The drive begins and ends at the Mazda Ride and Drive location outside of the Argetsinger grandstand. Fans can also receive free shuttle rides in the brand-new Mazda CX-9 from the Mazda consumer display and Owner’s Lounge near the Watkins Glen paddock area. (See map attached for details.) 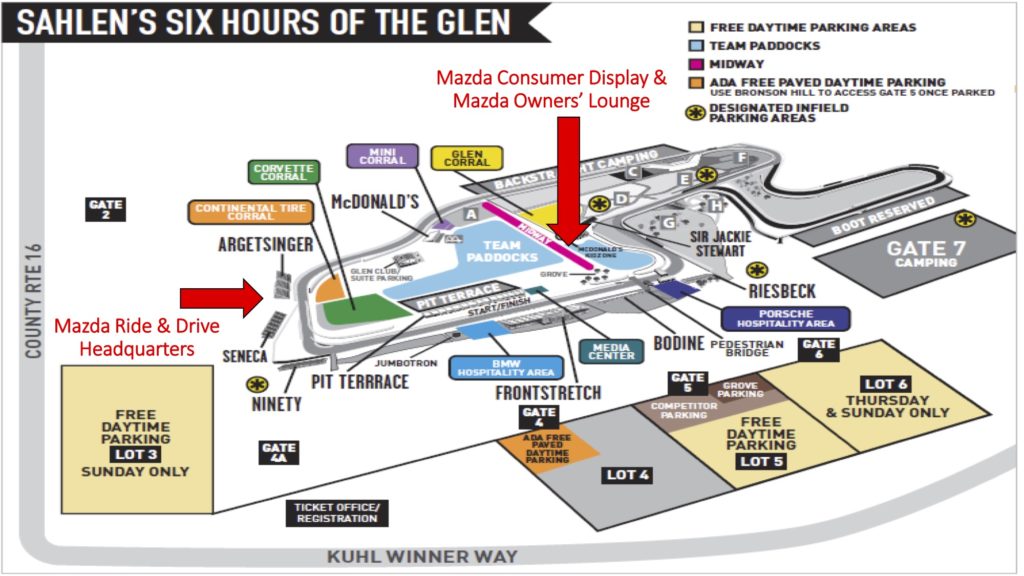