– Special paint schemes to reflect past, present and future of Mazda racing –

IRVINE, Calif. (June 27, 2016) – The two-car Mazda Prototype team will carry special liveries at the Sahlen’s Six Hours of the Glen at Watkins Glen International, July 1 – 3. The No. 55 Mazda will feature a vivid green and orange color scheme in honor of the 25th anniversary of Mazda’s rotary powered victory at the 24 Hours of Le Mans in 1991. The No. 70 car will carry a similar design, but in the Soul Red, Silver and Machine Grey colors which represent the present and future look of the Mazda brand and Mazda Motorsports. The Sahlen’s Six Hours of the Glen is round six of 10 of the IMSA WeatherTech SportsCar Championship. 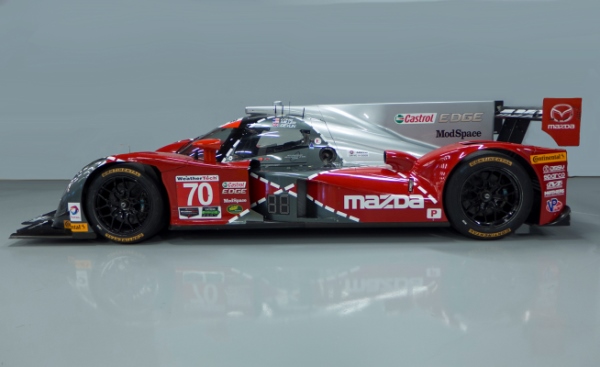 Mazda’s win with the iconic 787B race car was the culmination of 17 attempts at Le Mans, and represented Mazda’s ‘Never Stop Challenging’ ethos that remains with the Hiroshima-based automaker to this day. The unique pattern of the paint scheme was inspired by the primary sponsor of the 1991 winner, Renown, a clothing company which made argyle socks. Acknowledging our respect of the tremendous effort and heartbreak at Le Mans for our friends at Toyota last week, Mazda remains the only Asian manufacturer to win overall at the 24 Hours with the only car to win the famous French classic with an engine not driven by traditional reciprocating pistons. 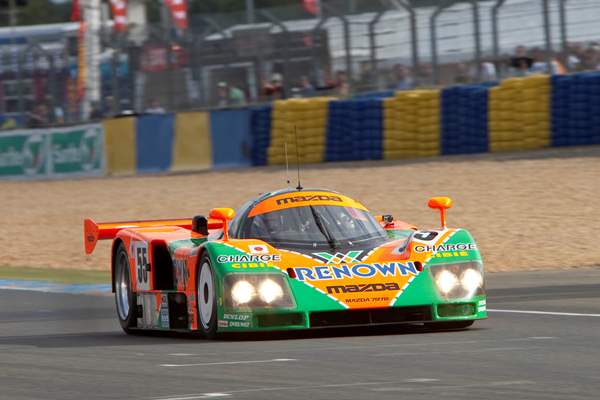 For the 1991 race, the cars entered by Mazdaspeed Co. Ltd. were powered by 2.6-liter, four-rotor Mazda R26B rotary engines. The winning drivers in the No. 55 car were Johnny Herbert (Britain), Volker Weidler (Germany) and Bertrand Gachot (Belgium), who traversed 362 laps in the race. They defeated factory efforts from Jaguar, Mercedes-Benz, Porsche, Peugeot and more. A second Mazda 787B finished sixth, while a third factory entry in a year-old 787 finished eighth.

A Hot Look and a Hot Team
The Mazda Prototype team has matched or improved their best-ever finishes in each of the last four races, including the first-ever podium finish in the Prototype category at Detroit, where the team finished third and fourth in class. After a successful two-day test at the newly repaved 3.4-mile Watkins Glen track, we spoke with 20-year-old driver Tristan Nunez about the upcoming race weekend.

You weren’t even born in 1991. What is your view of the throwback look?  “I may not have been born when they won Le Mans, but being an age where technology is key, there are a lot of videos on the internet of that car! I’ve been watching the 787B for years – even before I got picked up by Mazda. It’s one of those cars that really captures your eye – and the sound that rotary motor made! It’s going to be an honor to run that paint scheme. I won’t see the car until it rolls off the trailers at the Glen, but I assure you it’s going to be an emotional moment for a lot of people, myself included.”

Describe the new paving on the historic upstate New York track.  “The new surface is unbelievable. I’ve never driven a smoother track in my life. It sounds weird, but it’s so smooth you have to relearn the track. You don’t feel any bumps, which was really surprising. It has so much grip the car just hooks up around the corners so well. The Mazda Prototype really likes the track because we can run it really low, which is the secret to the aerodynamics of this car. I’m interested to see how we compare to the competition, but I think we have a good finish in the crosshairs for sure.”

Are there physical challenges that come with the new surface?  “There are a lot of high speed corners at this track – a lot – plus some long-duration corners. It really puts a toll on your body with the amount of G-forces you’re pulling for a long length of time. Keeping up physically is very important, because it’s a six-hour race. Depending on the strategy, we’ll likely do two hours at a time, so I’ve been really working at the gym. You can’t have your body fail under those conditions.”

Ben Devlin and Spencer Pigot Will Join the Team at Watkins Glen
The Mazda Prototype team will feature an expanded driver lineup for the Sahlen’s Six Hours of the Glen. British racer Ben Devlin has been the go-to driver for the endurance races with the No. 70 team since 2014, and has driven Mazda-powered prototypes for many years. IndyCar driver Spencer Pigot will join the team in the No. 55 Mazda.

Pigot is the winningest driver in the history of the Mazda Road to Indy (24 wins) and was the 2015 Indy Lights champion, which earned him a Mazda scholarship to compete in three IndyCar races (including the 100th-running of the Indianapolis 500), which he parlayed into a contract to compete in all of the remaining IndyCar street and road course events this year with Ed Carpenter Racing. We spoke with Pigot about returning to the Prototype team for the third time this season.

Is this your first time racing at Watkins Glen? “Watkins Glen is going to be new for me. I’ve heard great things about it, but I’ve never been there. I’m really looking forward to that. With the Mazda Prototype team, I’ve got great teammates that have been there many times, so it’s good for me to learn from them and also it’s good preparation for when I go back there with IndyCar in September.”

Is it a challenge coming in as the ‘third driver’ on an established team? “It’s a unique place to be. It’s not something I’ve done in the past. Everything I’ve done, I’m the driver of the team and I’m in the car all season. But this situation is a new challenge, and I have to get used to the car and track very quickly. The team have been fantastic. The other drivers are all good friends of mine and we really work well together. It worked out that we’re all of similar size so there isn’t much that has to change inside the car, which is important. You don’t want to be the third driver who comes in to disrupt the team, disrupt the flow of what they’ve built throughout the season. I’ve been able to come in and fit right in. It goes back to all of the crew guys, the engineers and everyone at Mazda are very welcoming and friendly. And the drivers are very open to having me there. I think they see it as a positive. It gives them a chance to learn some things from me as I learn from them.”

— Each of the drivers will be wearing special driver suits that echo the uniforms from 1991. A set of the uniforms will later be auctioned to benefit Mazda’s “Drive for Good’ charitable and philanthropic program.

WeatherTech SportsCar Championship Points (After 5 of 10 races)
In the point standings for Prototype drivers, Bomarito and Nunez are tied for fourth place, while Miller and Long are tied for sixth place. In the manufacturers battle, Mazda is currently third in the Prototype category.

Watch and Listen
The race can be seen live on Fox Sports 1 (aka FS1) Sunday, July 3 beginning at 10 am Eastern Time. Practice and qualifying can be streamed live at IMSA.tv. To listen to each session, stream live with Radio IMSA/Radio Le Mans.