IRVINE, Calif. (May 11, 2016) –  The Mazda Road to Indy is a huge part of this weekend’s Angie’s List Grand Prix of Indianapolis at the Indianapolis Motor Speedway. The three categories – USF2000, Pro Mazda and Indy Lights – will each have two races this weekend at the famed Brickyard. Mazda Road to Indy on-track activities begin Thursday with practice sessions, followed by qualifying and three races Friday, then the final three races Saturday on the 14-turn, 2.605-mile circuit which utilizes parts of the Indy oval and then snakes through the massive infield.

Spencer Pigot (pictured left, with video link), who has more victories (24) than any other driver in the history of the Mazda Road to Indy, will be making his second career start in the Verizon IndyCar Series this weekend. It is one of the three races that Pigot earned by winning last year’s Indy Lights championship. The young American became the first driver to win four different Mazda driver development scholarships in his career, which has propelled him to the top open-wheel series in North America.

After winning the Indy Lights crown, Pigot joined the driver lineup for the Mazda Prototype team in the Rolex 24 at Daytona and the 12 Hours of Sebring for the IMSA WeatherTech SportsCar Championship. He finished sixth overall at Sebring, along with co-drivers Jonathan Bomarito and Tristan Nunez.

Pigot, 22, will be in the Rahal Letterman Lanigan Racing entry No. 16 as a teammate to Graham Rahal. He finished 14th in his IndyCar debut at St. Petersburg in March, and is also entered in the 100th running of the Indianapolis 500 later this month.

“I’ve always said one of the most valuable things about the Mazda Road to Indy is racing at the same tracks as the Verizon IndyCar Series,” said Pigot.  “Going into this weekend, I feel very prepared because I’ve raced here in Pro Mazda and Indy Lights. I know what I need from a car to go quickly and what to look out for in the races to avoid trouble. I think my experience here in the Mazda Road to Indy gives me an edge over other rookies that didn’t race here in the ladder system.”

Pigot is one of 15 drivers (out of 25 total) in the IndyCar race this weekend who have competed in the Mazda Road to Indy categories.

The Mazda Indy Lights Grand Prix of Indianapolis Presented by Cooper Tires
The Indy Lights series has been sparkling so far in 2016, with five different winners in five races. There are 16 cars entered for the Indy road course weekend, with drivers from seven countries in the starting field. 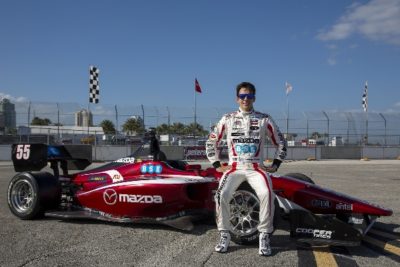 The most recent victor is 19-year-old Santiago “Santi” Urrutia (pictured left) from Uruguay, who dominated the second race at Barber Motorsports Park in Alabama. Urrutia, driving for Schmidt Peterson Motorsports w/Curb-Agajanian, is racing in Mazda’s Soul Red color to signify that he is the Mazda scholarship winner after taking the 2015 championship in the Pro Mazda series. Leading the way in points is Ed Jones with Carlin Racing, followed by Kyle Kaiser of Juncos Racing in second. Jones’ Carlin teammate Felix Serralles is third, followed by Urrutia in fourth. All four have one victory so far this season. Felix Rosenqvist has the other victory, and sits seventh in the standings. 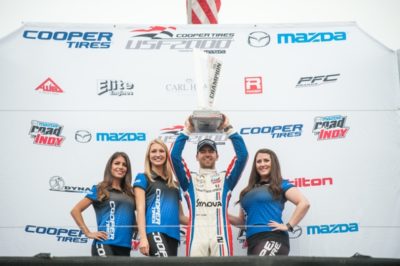 The season has been dominated so far by Team Pelfrey, which has taken all four race victories.  For the Indy Grand Prix weekend, there are 13 entries in Pro Mazda with drivers representing six countries.
Three wins in 2016 have been grabbed by Pato O’Ward, a native of Mexico who turned 17 years old last week. O’Ward leads the point standings, followed by teammate Aaron Telitz in second. Until recently, O’Ward was not certain of racing at Indianapolis due to budget constraints, but he will be in the No. 80 car this weekend to aim for victory. Mazda scholarship winner Nico Jamin of Rouen, France, is currently fourth in the standings and returns to Indianapolis where he won two races last year to take control of the USF2000 championship. His title earned him the scholarship into Pro Mazda this season with Cape Motorsports w/Wayne Taylor Racing. 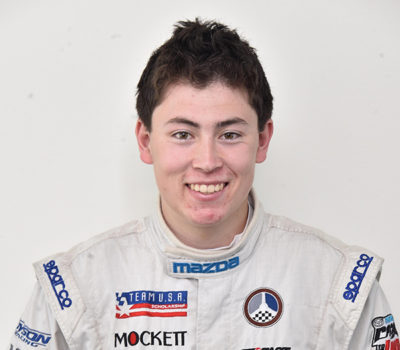 The largest field of the three categories will be the USF2000 series with 27 entries, and drivers from nine different countries.
Pabst Racing dominated the season-opening St. Petersburg Grand Prix, with their drivers Jordan Lloyd and Yufeng Luo trading wins. In the most recent event at Barber Motorsports Park, Canadian driver Parker Thompson took the first two wins of his career, and establishing his place at the top of the point standings. The Mazda scholarship winner, Dakota Dickerson, 19, is currently 14th in points with the Afterburner Autosport team (pictured left).

Mazda Motorsports boasts the most comprehensive auto racing development ladder system of any auto manufacturer in the world. The Mazda Road to 24 program offers a number of scholarships to advance drivers up the sports car racing ladder, beginning with the MX-5 Cup series and culminating with the Mazda Prototype team. The Mazda Road to Indy is a similar program that includes Mazda-powered categories of USF2000, Pro Mazda and Indy Lights. In grassroots road racing, more Mazdas race on any given weekend in North America than any other manufacturer. Mazda is also the title sponsor of the renowned Mazda Raceway Laguna Seca in Monterey, Calif. Follow all of the latest news at MazdaMotorsports.com, @MazdaRacing on Twitter, and MazdaMotorsports on Instagram and Facebook.