The SCCA held its second Championship Tour of the season this past weekend at the NASA site in Crows Landing, California, about an hour and a half south of Sacramento.  Ron Bauer was there with the 2016 Miata that he’s co-developing with Mazda Motorsports.  This was the first opportunity to get some testing against some of the top drivers in STR.

As you’ll recall from earlier articles, Bauer had been working on parts for the car in CS trim.  Now with that complete, the focus for the remainder of the season will be on STR.  STR allows a number of upgrades from CS, including coilovers, a rear swaybar, LSD, a full exhaust, a tune, bushings, seats, and a few other items.  While Bauer has made a number of these changes to the car, the team will be testing parts throughout the season to get the right combinations, which will allow you to purchase parts directly through www.MazdaMotorsports.com.  The weather report looked promising for the weekend, with a chance of rain on Friday, and then dry and mid-70s for the remainder of the weekend.  Fortunately, most of the rain skirted the site on Friday, allowing Bauer to get some test runs in to see whether the initial settings would work.

After a run on the practice course, it was immediately obvious that this site, while being incredibly grippy, was also very bumpy.  Bauer started making changes to soften the shocks, and did so every run.  “The practice course was a good representation of what the actual courses would be, with two shifts to 3rd.  Overall, the handling was good at the high speeds, but the bumps were causing a lot of problems with trusting the car,” said Bauer.

Come Saturday morning, the weather was good, and the course was fast.  “I ultimately went to 3rd four times per run, with a top speed of around 75 mph (Very fast by autocross standards.)  My first two runs had me sitting in 2nd place, but a fair distance behind the leader.  I softened the rear compression a little further and was able to put a 3rd run down that was just 0.331 behind leader James Yom in his Honda S2000 CR.”

Bauer adds, “Sunday morning, we chose to go down another two clicks on compression all the way around as the car was still bouncy.  First run out, I hit a cone, and while the time was way behind the leader, I was right with Kevin Dietz, who had been 0.141 behind me at the end of competition on Saturday in his S2000.  Second runs saw both of us improving, but I moved back into 2nd.  We then lowered the rebound all around, and I put down my fastest run on my third run to solidify 2nd place.” Dietz, who took 2nd at Nationals this past year, is local to Bauer, so he will have a great gauge all year running against him.

“Ultimately, given that this was our first “real” test in STR trim, I’m pretty happy with the result.  I think I still have a lot of experimenting to do with shock settings for sure, and I will likely also try both softer and stiffer spring rates once we’re home.  I think the shocks have the range to work well, but this site is the grippiest one I’ve ever run, so it can sometimes mask other issues.  More venues and testing will help on the fine turning,” notes Bauer.

Next weekend, the San Francisco Region of the SCCA will be hosting a Pro Solo on the same site, so watch here for more updates after that. 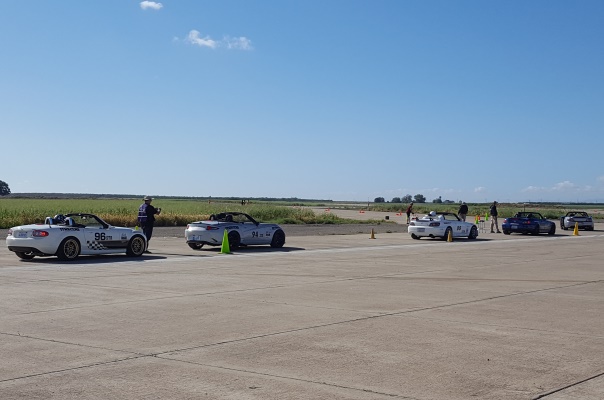