After some early season testing that looked very promising, Ron Bauer and Mazda Motorsports have wrapped up the final testing of the new 2016 Mazda MX-5 Miata for the C Street (CS) class with absolute success!

As you’ll recall from earlier articles, through Ron Bauer, Mazda Motorsports has been testing parts to offer them for purchase individually, as well as in kits.

While early season testing looked great, the only way to know how good everything was working was to compete against some of the best in the country at larger events.  That being the case, Ron recently attended both the Oceanside Showdown Match Tour in San Diego, CA, and the El Toro Pro Solo in Irvine, CA.

The San Diego event started with some runs on the practice course using the settings previously developed in the early season.  A few shock changes were made during this, but more fine-tuning was needed during the event.  Due to the nature of the Match Tour format, the team was able to get a minimum of nine runs per driver. This allowed the easy ability to make changes and know whether they helped or hindered.  Ron’s co-driver, Charly Spyksma, was also at this event, so that meant twice the number of runs, as well as extra input on how the changes affected the car.

This would also be the first time out on BFGoodrich Rival S tires.  Different tires potentially require different settings, so it was known that shock settings and tire pressures may need to be adjusted.

Saturday morning began with Bauer meeting Kenton Koch, a class winner in the Rolex 24 in a Prototype Challenge car, and benefactor of the Road to 24 scholarship program through Mazda by winning three straight championships in professional road racing series.  It turned out that this meeting allowed the two drivers to get some good-natured competitive ribbing in during the event as they battled it out all weekend.

The CS class had thirteen drivers competing in various cars.  The new Miata, previous generation Miata, RX-8, and FR-S were represented.
Koch started out with a run that took fast time in class in his RX-8; Bauer took the lead from Koch, but Koch reclaimed it after his third run – yet again a clutch performance. But after making some shock changes, tire pressure changes, and looking at data, Bauer put down a 3rd run after Koch that would take the lead into the afternoon by just over 2/10s of a second.

In the afternoon, Bauer placed the fastest time in the CS class on his first run.  On Koch’s final run, he took the lead for the Tour portion of the event by a scant 0.048.  “I knew heading up to the line that I only needed to run a 49.420 to win, but I also knew that there was more time out there.  I focused on the areas that I knew I was losing time, and came in with the fastest time of the day with a 49.122 to take the win by 0.299,” said Bauer.  “It was great getting to meet Kenton; he proved that he wasn’t just a top tier road racer, but autocrosser as well.  I really had to work for this win.”

The week between the Tour and Pro had Bauer driving the Miata around Southern California, and it confirmed that with the adjustability of the shocks, the car was not only a very competitive autocrosser, but a very fun and comfortable car to drive on the streets and canyons.

The El Toro Pro was next. 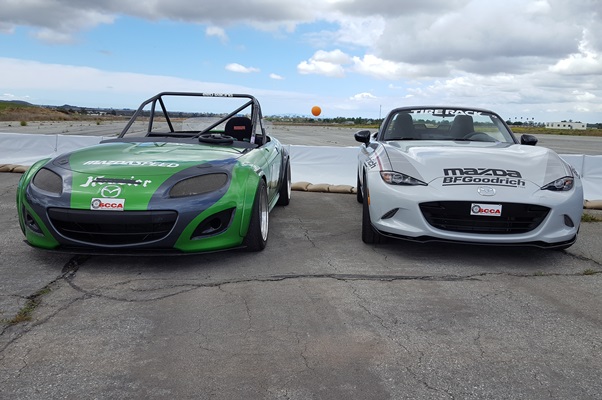 After evaluating the San Diego event, the team realized that the tire pressures used had been too low in the BFGs.  The pressures were brought up, but no other changes made.

There was a threat of rain all weekend, so each run was critical in case a given run was the last dry one for the day.  For Bauer’s first run, he had an erroneous red light on his fast right side, which unfortunately left him in 4th place at the end of the Saturday morning runs. The good news though was that co-driver Charly Spyksma was sitting in the top spot, so the car obviously had what it took to run at the top of the eleven driver class.  Cars represented at this event besides the new Miata again included the RX-8 and FRS, but also added an MR2 Turbo.

On Saturday afternoon, the first drivers in the class, including Spyksma, only got one run before the rain came.  Bauer assumed that he too would get wet runs, but the rain stopped and after a few timing delays triggered by the rain, the course was nearly dry when he ran.  On his second left side run, he pulled into the lead over his co-driver.

Rain overnight left the course wet, but as competitors took to the course, it began to dry. By the time Bauer ran, the left course was dry enough for some drivers to improve, while very few were able to pick up time on the right.  “I was lucky to be able to start on the left course to get warm tires for the right, where I knew I needed to take off time.  However, I quickly realized that while most of the right side was dry, the turn-around was not.  My first run over there was not too far off my fast run, so I figured I might be able to gain a little time, but figured I’d really need to focus on the left to try to take advantage of the fully dry course over there.  My final left, unfortunately, didn’t result in an improvement, so I decided to really attack the right course on the way to and from the turn-around and then over slow on the wet section to allow me to have a chance to improve.”  Ultimately, Bauer was able to shave off over 4/10s of a second to cement his lead.  Fellow ND driver Jeff Bandes also improved to move up to the second position in class.  Co-driver Spyksma would see improvements as well, but ultimately fell to 3rd place.

To ease the worries of some that gearing might be an issue, Bauer notes, “To get the most out of the Miata at both events, 3rd gear was needed.  I’m still in awe of how easy the gearbox goes into 3rd.  Also with the amazing torque curve, people will probably need to reevaluate what gear they are in.  You can run in 3rd at lower RPMs than you’d think without losing time. Of course, this also means that engine braking is different, so driving style may need to change to take advantage of this.  The car starts losing power before red line, so shifting early might actually be a benefit.  That said, sometimes less shifting will still be beneficial.  For example, at the San Diego event, I was shifting to 3rd before the first slalom and ultimately gained about 5 mph going in, but didn’t execute as well and was slower at the end of the slalom by a little versus staying in 2nd.  I still believe 3rd would have been faster, but I too need to work on changing my style of driving a little to allow this to be the case.”