“It was my second time at the White House,” Nunez said shortly after the event. “I thought it was a once-in-a-lifetime opportunity, but I guess it’s twice now… It was a huge honor to be invited back again. I’m kind of speechless right now. It was a pretty cool experience.”

The 20-year old, who has his own distracted driving foundation – the Dnt txt n drV Foundation,  had a memorable experience once inside the White House.

“I got to go inside to the Blue Room,” he said. “It was pretty unbelievable, I got to meet the First Lady and give her a big hug. It was an awesome experience.”

The event included many celebrity guests such as Jay Z and Beyonce with their daughter Blue Ivy, Tony-winning singer Idina Menzel and a number of professional and amateur stars from a wide array of sports. Nunez was the sole representative for the motorsports industry. 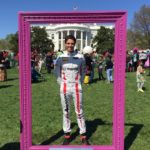 “We got to play with the kids a lot on the lawn as part of the active physical education. It was great to have an up-close-and-personal relationship with so many kids on the White House grounds. Pretty dang cool to see the smiles on their faces. I was grouped with some NFL football players, like Tress Way [of the Washington NFL team], and it’s just a huge honor all around to meet them.”

Nunez will next be on-track at the Grand Prix of Long Beach. The Mazda Prototype team will compete in the Bubba Burger Sports Car Grand Prix Saturday, April 19.