A new season of racing begins this weekend at the Rolex 24 at Daytona.

When the green flag flies at 2:40 pm ET, it will mark the first race for the new Mazda Prototype MZ-2.0T engine. The gas-fueled two-liter, inline four cylinder turbocharged engine produces approximately 570 horsepower and, with its speed and strong drive-ability, is expected to make the two Mazda Prototype contenders for podium honors this weekend and throughout the 2016 schedule.

The two-car team includes the No. 55, driven by Tristan Nunez and Jonathan Bomarito for the season, with current Indy Lights champion Spencer Pigot joining the lineup for the 24 Hours. In the No. 70 car, the full-season lineup consists of Tom Long and Joel Miller, with Ben Devlin added to the team for the 24-hour race. The No. 55 car is numbered to honor the 25th anniversary of Mazda’s victory at Le Mans in 1991 with the rotary powered 787B. Mazda remains the only Asian car manufacturer with an overall victory at Le Mans.
You can check out the race during the following times on television, but you can get live streaming all the time through IMSA.tv and through the free IMSA App where you can see the Mazda Prototype in-car cameras. 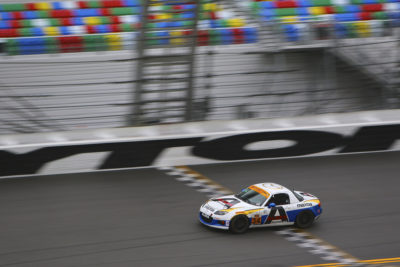 This weekend also marks the kick-off of the Continental Tire SportsCar Challenge series for 2016. At Daytona, five Mazda MX-5s will do battle against a large field of Porsche Caymans, Honda Civics, Minis, Audi S3s, and BMW 328i entries. For Mazda, the factory backed team of Freedom Autosport will race three MX-5s, with defending ST class champions Stevan McAleer and Chad McCumbee in the No. 25 car, Andrew Carbonell and Marine Staff Sgt. (Ret.) Liam Dwyer in the No. 26, and Britt Casey Jr. and Danny Bender (a top Mazda salesman in the Chicago area) in the No. 27. Freedom Autosport is dedicating Friday’s race to the memory of the 12 US Marines who perished in a helicopter crash in Hawaii earlier this month.  ALARA Racing is back for a full season in 2016 with the No. 34 Mazda MX-5. At Daytona, Christian Szymczak and Justin Piscitell will be behind the wheel. Riley Racing has entered the No 66 Mazda MX-5 with drivers AJ and Jameson Riley.