Mazda chose to debut four of the new 2016 MX-5 Cup cars in the always-brutal NASA 25 Hours of Thunderhill race, equal to 33 1/3 45-minute Idemitsu MX-5 Cup races, far in excess of a normal race season.  After 25 hours, or almost 8,000 combined miles completed by the four cars, the result was a resounding success.

“While not as well-known as the Rolex 24 at Daytona, the NASA 25 Hours at Thunderhill is just as tough on equipment,” said John Doonan, Mazda’s motorsports director. “With over 70 orders for the new car, we wanted a way to further showcase the quality, durability, and reliability of the race car in true Mazda fashion.  Our drivers were Mazda employees and dealers.  Our pit crew was made up 100% by volunteers, mainly Mazda employees taking vacation time to do this.  “Driving Matters” isn’t just a slogan; it’s a way of life for Mazda.  Thanks to everyone at Robert Davis Racing, Long Road Racing, Mothers, BFGoodrich® Tires, and everyone else who helped make this a success.  Having Mazda class winners in both E2 and E3 made for an especially great weekend.”

The MX-5 Cup cars were entered in the “E0” class – overclassed purposely so they wouldn’t compete with other Mazda teams – and competed against a variety of BMW and Nissan teams. Since the cars were built to a unique Mazda Global spec, and not optimized for the NASA regulations, the goal was not victory but real world testing miles and reliability in competition.  The four cars racked up multiple seasons worth of data in 25 hours of action that included many hours in pouring rain.  Of particular note was the wet-weather performance.  Frequent driver comments after wet runs were “fun” and “that car is magic on the BFG rain tires”.  During the heaviest rain, the MX-5 Cups were lapping at speeds much faster than the majority of the field, including the fastest classes. 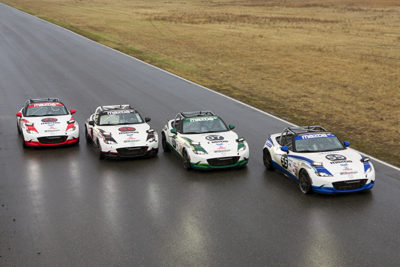 The price for the turnkey ready-to-race Mazda MX-5 Cup car is $53,000.  Long Road Racing began production last month and will be busy during the off-season with more than 70 orders in-hand. Details for the ordering process, including financing options, are available at www.MazdaMotorsports.com.  Additional information on the MX-5 Cup can be found at MX-5Cup.com. You can follow the progress of the 2016 MX-5 Cup car development on the new Twitter handle: @GlobalMX5Cup.  The 2016 MX-5 Cup season begins during the IMSA weekend at Mazda Raceway Laguna Seca on April 29 – May 1.

In additional news from Thunderhill, Mazda also claimed two class wins from the dozen grassroots Mazda teams competing in three of the seven classes.
•    Team RDR, scored their second-straight “E2” class win in their fast and reliable No. 34 Mazda RX-8, followed across the line by the Team Gone Racing Mazda Miata in second.  The winning drivers in No. 34 were Dennis Holloway, Joel Miller, Lee Pappageorge, and Jeremy Barnes.
•    It was a Mazda Miata 1-3 finish in “E3”, with the gold going to the No. 40 RA Motorsports and the bronze to RJ Racing.  The winning drivers in No. 40 were Darin Polsley, Phillip Holyfield, Jamie Florence, and Daniel Cooper.
•    Also making a world race debut was the Elan Technologies NP01 prototype, powered by a Mazda MZR engine.  The two NP01 teams were also viewing the race as a real-world test and were pleased with the results.

The race was streamed live for all 25 hours from inside the MX-5 Cup cars at www.MazdaLIVE.com  allowing Mazda fans around the world to track the action.