Florida iRacer earns a $100,000 scholarship to compete in the 2016 Idemitsu Mazda MX-5 Cup after coming out on top of the Mazda Road to 24 Shootout.

After two days of intense competition at the Carolina Motorsports Park in Kershaw, S.C., Glenn McGee, from Tampa, Fla., earned the 2015 Mazda Road to 24 Shootout scholarship. The $100,000 scholarship to compete in the 2016 Idemitsu Mazda MX-5 Cup that came with the victory is the largest award in grassroots motorsports. Launched in 2006 as the Mazda Club Racer Shootout, the Mazda Road to 24 Shootout has annually promoted one talented grassroots racer into the professional ranks.

McGee became the first shootout winner who came from the world of iRacing. While McGee earned his access to the shootout as an iRacing sim racing champion, he also trained on the track with 2015 MX-5 Cup champion John Dean II in his MX-5 Cup cars.

By winning the shootout, McGee has earned the resources to compete in the 2016 Idemitsu Mazda MX-5 Cup. For 2016, this will be in the all-new MX-5 Cup car, which went on sale on Oct. 1. The 2016 MX-5 Cup season will begin the weekend of April 29 – May 1 at Mazda Raceway Laguna Seca, in Monterey, California. 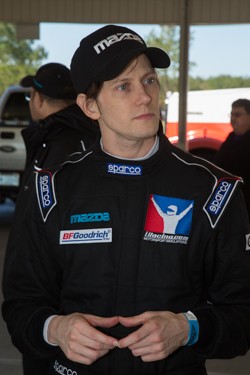 “I don’t believe it! Just competing in the 2015 Mazda Road to 24 Shootout and driving the new MX-5 Cup car felt like a dream the whole time, but to come out with the overall victory is surreal and is really overwhelming,” said McGee. “To transition so well from the iRacing.com virtual MX-5 Cup car to the real-thing, against so many talented proven drivers, was well beyond anything I could have ever imagined. I can’t thank Mazda and their partners enough for supporting so much talent over the years and for awarding me this extraordinary honor to represent their brand in the 2016 Idemitsu, MX-5 Cup and I can’t wait to get back in the car!”

This year’s shootout was the 10th since the program started in 2006. This year was the first to use the all-new Mazda MX-5 Cup cars based on the ND chassis. Long Road Racing, the builders of the 2016 Mazda MX-5 Cup race car, prepared two cars for the finalists to drive. BFGoodrich® Tires provided the latest g-Force tires for the competition.

“It is hard to believe it has been 10 years already, but – once again – Mazda has provided this very special opportunity for grassroots racers to take the first step into pro racing,” said John Doonan, Director of Mazda Motorsports.  “This year provided an extra twist as it was the first shootout with the all-new 2016 Mazda MX-5 Cup race car, so none of the finalists had a chance to test the car in advance.  The two days were extremely pressure filled for the candidates, as everyone had to learn the car and the track as rapidly as possible.  Adding to the challenge was constant rain.  Everyone at Mazda was impressed with the talent and poise of all of the drivers, and the decision by the judges was a difficult one.”

Given that each of the finalists had proven themselves on the track – virtual or real – with race wins and championships, the criteria to move up needed to be more encompassing. To succeed on the professional level requires a balance of both on-track and off-track skills including the following:
• Driving ability – Fast laps/consistent laps
• Technical skills – Understanding of vehicle dynamics and suspension, ability to evaluate vehicle handling, and ability to analyze data
• The business of motorsports – Business proposal and interviews

“As a judge, I really appreciated the intense conditions of drenching rain, a pair of new 2016 Mazda MX-5 Cup cars and a new track,” said professional racer and businessman Charles Espenlaub.  “Everyone did a great job in adapting to the constantly changing track and taking care not to hurt the cars. The awesome new BFGoodrich rain tires provided excellent grip in the wet and the new slick performed well as it dried up.  It was exciting to watch everything unfold as all the session data were tabulated and the deliberation continued into the night, and following days.   As always the field was deep in talent, so it was a challenge to choose our new champion.”

“I couldn’t be more excited for Glenn,” said iRacing Director of Marketing & Communications Kevin Bobbitt. “Winning the Mazda Road to 24 Shootout is a huge accomplishment in itself, and now Glenn has the opportunity of a lifetime to race in the 2016 Idemitsu Mazda MX-5 Cup. This is the second year iRacers qualified for the shootout, and Glenn proved iRacing can be a stepping stone to a professional motorsports career. On behalf of iRacers everywhere, I want to thank Mazda for putting their trust in iRacing to develop and identify some of tomorrow’s top racing drivers. We are all looking forward to watching Glenn on track next year and to racing the 2016 MX-5 Cup car on iRacing.”

The Runner-ups for the 2015 Mazda Road to 24 Shootout were a strong group of racers from the SCCA, NASA, and iRacing: