RACER magazine photographed the 2016 Mazda MX-5 Cup prototype for its In Focus feature and agreed to share it with MazdaMotorsports.com. 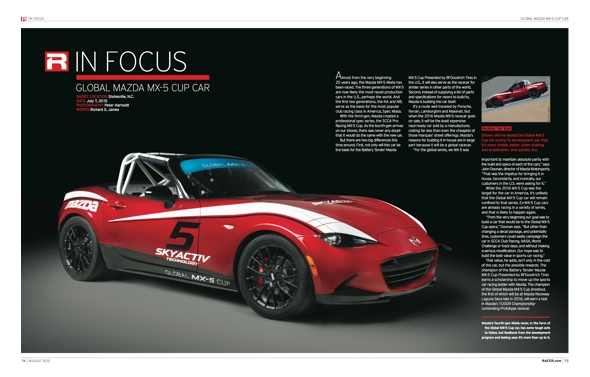 Click on the photo to view the PDF of the article.

Almost from the very beginning 25 years ago, the Mazda MX-5 Miata has been raced. The three generations of MX-5 are now likely the most-raced production cars in the U.S. and perhaps the world, and the first two generations, the NA and NB, serve as the basis for the most popular club racing class in America, Spec Miata.

With the third generation, Mazda created a professional spec series, the SCCA Pro Racing MX-5 Cup. As the fourth generation arrives on our shores and auto writers are unable to spew the superlatives fast enough, there was never any doubt that it would do the same with the new car. There are two big differences this time around. First, not only will this car serve as the basis for the Idemitsu Mazda MX-5 Cup in the U.S., it will serve as the racecar for similar series in other parts of the world, all using the same car. Second, instead of supplying a list of parts and specifications for racers to build to, Mazda is building the car itself.

It’s a route well travelled by Porsche, Ferrari, Lamborghini and Maserati. But when the 2016 Mazda MX-5 racecar goes on sale, it will be the least expensive race-ready car sold by a manufacturer, costing far less than even the cheapest of those manufacturers’ street offerings. Mazda’s reason for building the car in-house are in large part because it will be a global racecar.

“In the case of the global series, we felt it was important to maintain absolute parity with the build and the specs of each of the cars,” says John Doonan, director of Mazda Motorsports. “That was the impetus for bringing it in house. Secondarily, and ironically, our customers in the U.S. were asking for it.”

While the 2016 MX-5 Cup was the target for the car, and the new one is designed to a similar level of preparation as the old one, it is unlikely that the MX-5 Cup car will remain confined to that series. Ex-MX-5 Cup cars are already racing in a variety of series, and that is likely to happen again.

“From the very beginning our goal was to build a car that would be to the global MX-5 Cup specs. But other than changing a decal package and potentially tires, customers could easily campaign the car in SCCA Club Racing, NASA, World Challenge or track days, and without making a serious modification. Our hope was to build the best value in sports car racing,” Doonan says.

That value, he adds, isn’t only in the cost of the car, but the possible rewards. The champion of the Idemitsu Mazda MX-5 Cup Presented by BFGoodrich® Tires earns a scholarship to move up the sports car racing ladder with Mazda. The champion of the MX-5 Cup shootout, the first of which will be at Mazda Raceway Laguna Seca late in 2016, will earn a test in Mazda’s Prototype racer.

RACER magazine got a hold of one of the MX-5 Cup prototypes built by Long Road Racing and handed it over to Peter Harholdt to shoot for its “In Focus” series. Richard S. James added some words and action photography from the car’s public debut at Mazda Raceway Laguna Seca. Click on the image at top to check it out for yourself.