It all came down to tire choice for the Spec Miata race, also known as Friday Night Lights thanks to Mazda enabling the first night race in Runoffs history by sponsoring the lights at Daytona International Speedway. A light shower just before the race slicked the track, and several drivers wrestled with whether to go with wet or dry Hoosiers as the rain stopped.

In the early going, the wets were clearly better. Alex Bolanos and Cory Collum took off, running nose to tail on the wets for a dozen laps and pulling a big gap on everyone else. Polesitter Andrew Carbonell chose dry tires, and he said after the race that for the first six or seven laps, he regretted that choice. However, as the water evaporated and a definite dry line appeared, the slick tires became the ones to have and those who chose them were getting faster. Sixth-place starter and Runoffs rookie Jonathan Goring was also on dries and running third. But he was having trouble getting anywhere until he hooked up with Carbonell and the two started bearing down on Bolanos and Collum. Finally, on the last lap, Goring, now separating himself from Carbonell, got by the lead pair, as did Carbonell, and Collum also passed Bolanos at the strip in a photo finish. Jonathan Goring (Alfas Unlimited/Dixon/Rossini), who had purchased his Miata off Craigslist for $2000 with a blown engine, had won the Runoffs in his first attempt.

Formula Mazda was the second race of the day, and in his first visit to the Runoffs, 18-year-old Australian Joseph Burton-Harris left with an American National Championship. Carson Weeder, of Winter Haven, Fla., and Mike Anderson, of Anza, Calif., completed the podium.

Burton-Harris started on the Tire Rack Pole Position in his No. 132 Si Partners/Sydney Sports/GMG Formula Mazda, and ticked off a series of steady laps to get into the lead and cruise to a 9.906-second win.

The battle for the final two podium positions came down to a back-and-forth battle between Weeder’s No. 28 Weeder Motorsports Formula Mazda and defending National Champion Anderson’s No. 1 HASA Pool Products Formula Mazda. The pair swapped the position nearly every lap on the banking, with Weeder using the draft to get past just before the white flag. A fast final lap from Weeder had him clear of Anderson, and held on for second in his second career Runoffs race. 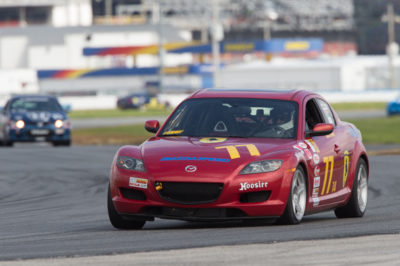 In another notable finish, Lance Stewart finished second in Touring 4 in his No. 77 Hoosier/Mazda/Hawk/Summit Mazda RX-8. The 1990 IMSA GTU driver’s champion chose the RX-8 for Daytona after driving another make for the last few years, and it nearly paid off. Stewart said he felt that with another lap or two, he might have had a shot, as the tires on winner Philip Royle’s Honda were going away.

All results are unofficial pending the completion of tech inspection.